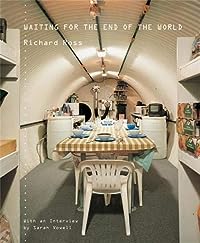 Waiting for the End of the World

Where will you go when the trouble starts? For countless people around the world, the answer is that bomb shelter down in the basement. In fact, people from around the work have been building shelters to protect themselves from catastrophe -- natural disaster, war, nuclear events -- for centuries.Waiting for the End of the World is photographer Richard Ross's journey into this quirky, somewhat paranoid, and occasionally beautiful underground world. Ross has documented not only the bomb shelters of the United States, but also examples from Vietnam, Russia, England, Turkey, and even Switzerland, where citizens are required by law to have a bomb shelter. Ross's subjects include the Greenbrier Hotel in West Virginia, where a shelter was built to house the entire U.S. Congress, shelters in Beijing, where the Chinese built a complete city underground, and Hittite shelters in Eastern Turkey built some 4,000 years ago. His ethereal images show spaces that at once provide only the barest necessities for survival but maintain a level of idiosyncratic personality that testify to the endurance -- and wackiness -- of the human spirit. Waiting for the End of the World features an interview by author and social commentator Sarah Vowell.… (more)