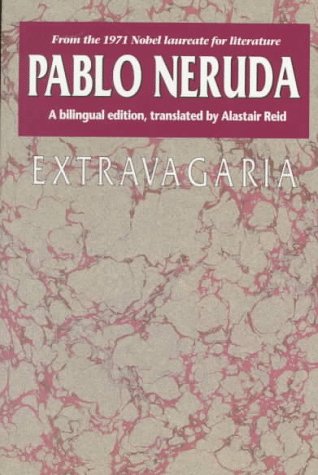 One of Pablo Neruda's own favorites among his books, Extravagaria marks an important stage in the progress of his poetry. It was written at the point in his life when he had returned to Chile after many wanderings and moved to Isla Negra on the Pacific coast. These writings celebrate this coming to rest, this rediscovery of the sea and the land, for in Extravagaria Neruda evolved a lyric poetry that is decidedly more personal than his earlier work. Written in what he called his "autumnal" period, the sixty-eight poems range from the wistful to the exultant, combining psalm and speculation, meditation and humorous aside.

LibraryThing member silverbow
Alastair Reid's translations of Neruda are masterful and capture the sense and music of the original poems. This anthology contains "A Callarse" ("Keeping Quiet")--a favorite.