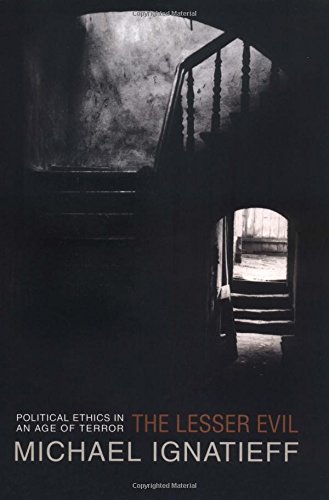 The Lesser Evil: Political Ethics in an Age of Terror

Must We Fight Terrorism with terror, match assassination with assassination, and torture with torture? Must we sacrifice civil liberty to protect public safety? In the age of terrorism, the temptations of ruthlessness can be overwhelming. But we are pulled in the other direction, too, by the anxiety that a violent response to violence makes us morally indistinguishable from our enemies. There is perhaps no greater political challenge today than trying to win the war against terror without losing our democratic souls. Michael Ignatieff confronts this challenge head-on, with the combination of hardheaded idealism, historical sensitivity, and political judgment that has made him one of the most influential voices in international affairs today. Ignatieff argues that we must not shrink from the use of violence-that far from undermining liberal democracy, force can be necessary for its survival. But its use must be measured, not a program of torture and revenge. And we must not fool ourselves that whatever we do in the name of freedom and democracy is good. We may need to kill to fight the greater evil of terrorism, but we must never pretend that doing so is anything better than a lesser evil. In making this case, Ignatieff traces the modern history of terrorism and counterterrorism, from the nihilists of czarist Russia and the militias of Weimar Germany to the IRA and the unprecedented menace of Al Qaeda, with its suicidal agents bent on mass destruction. He shows how the most potent response to terror has been force, decisive and direct, but-just as important-restrained. The public scrutiny and political ethics that motivate restraint also give democracy its strongest weapon: the moral power to endure when the furies of vengeance and hatred are spent. The book is based on the Gifford Lectures delivered at the University of Edinburgh in 2003. "Michael Ignatieff has written a sober yet chilling account of the issues facing liberal democracies in the face of modern international terrorism. In a surgical analysis he describes the challenges facing their leaders and citizens. His warning of the critical dangers of under-and over-reaction in combating terrorism could not be more timely."-Justice Richard Goldstone, Constitutional Court of South Africa."Michael Ignatieff's The Lesser Evil is a strikingly readable rumination on the ethical challenge of our time: How can a liberal democracy survive the long struggle against terror and do so in ways that preserve its institutions and dignity intact? His answer is a profound moral analysis, drawing on insights from philosophy, law, and literature, of how to surmount the strength of the terrorists, who are weak, and avoid the weakness of the democracies, who can be both strong and just."-Michael Doyle, Harold Brown Professor of Law and International Affairs, Columbia University.… (more)

LibraryThing member lukeasrodgers
I read this book both because Ignatieff, as the new leader of the federal Liberal party, has a decent shot at becoming Prime Minister, and because I wanted to get some first-hand insight into the some of the controversy that he stirred up around supposedly justifying certain forms of torture.

The book is well-written, though I feel like it could have been a fair bit shorter without sacrificing any of the persuasive power. In general, the main line of argument will probably be fairly agreeable to most people living in liberal democracies and, for the most part, uncontroversial.

Where I take issue with the book is in the somewhat limited definition of torture (which Ignatieff considers to exclude psychic and mental duress) and in his under-emphasis on terror as a tool in the hands of states. Ignatieff spends a fair bit of time discussing the threat that torture poses to the moral fibre of the very liberal-democratic institutions and agents who are conducting the torture (i.e. it is dehumanizing to both the torturer and torturee, and can lead to further demonization of the enemy and erosion of the liberal values that are at stake). And he does discuss the terroristic methods used by the state in the Algerian liberation conflict. However, almost entirely absent from the book is any significant discussion of the terrorism perpetrated and abetted by the United States--particularly in central and south America.

Finally, Ignatieff places a good deal of emphasis on the need for judicial and legislative review and transparency when liberal democracies take "lesser evil" courses of action. However, given recent experience with the Bush administration, it is safe to say that the sort of government most likely to take this course and risk the "moral hazard" is probably the least likely to ensure that such cautions and checks and balances are in place to prevent lesser evil actions from spinning out of control.… (more)

The crooked timber of humanity : chapters in the history of ideas by Sir. Isaiah Berlin
The One Percent Doctrine: Deep Inside America's Pursuit of Its Enemies Since 9/11 by Ron Suskind
Top Secret America: The Rise of the New American Security State by Dana Priest
The clash of civilizations and the remaking of world order by Samuel P. Huntington