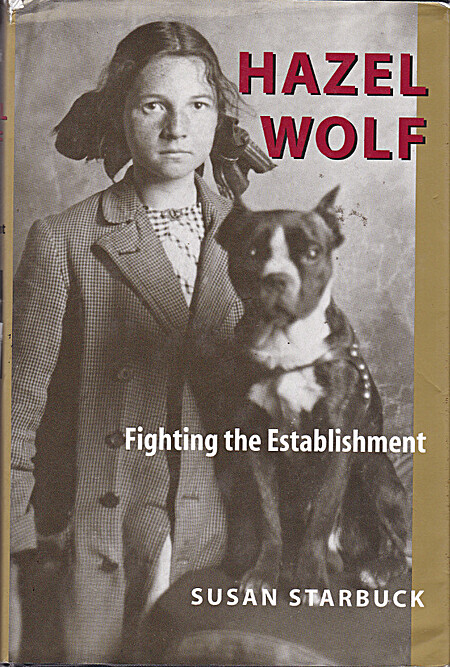 When Hazel Wolf died, at the age of 101, more than nine hundred of her friends -- from the governor of Washington to union organizers, from birdwatchers to hunters -- crowded Town Hall in Seattle to honor the feisty activist and tell the often outrageous "Hazel stories" that were their common currency. In this book, Hazel herself tells the stories. From twenty years of taped conversations, Susan Starbuck has fashioned both a biography and a historical document, the tale of a centurys forces and events as played out in one woman's extraordinary life. Hazel Wolf earned a national reputation as an environmentalist and was awarded the National Audubon Society's Medal of Excellence, an honor she shared with Rachel Carson and Jimmy Carter. She laid the groundwork for a unique coalition of Native Americans and environmentalists who are now working together on issues related to nuclear energy, fisheries, and oil pipelines. She lectured and taught at schools and universities all over the United States. She lobbied Congress on irrigration, labor rights, nuclear energy, and peace, and she corresponded with a global network of environmental leaders. But for all her influence, she never held a political post higher than precinct committee officer in Seattles 43rd legislative district, and her highest office in the environmental movement was that of secretary in the Seattle Audubon Society, where she served for thirty-five years. This book follows Hazel Wolf from childhood to old age, a lifetime of burning with a fierce desire for justice. She saw the quest for justice as a collective responsibility. Time and again, she met that challenge head on. Whether organizing for labor rights or founding chapters of the Audubon Society, battling to save old-growth forests or fighting deportation to her native Canada as a communist, over and over she put herself in the line of fire. "I was just there," she said, "powerless and strong, someone who wouldnt chicken out."… (more)

In the Company of Leaders: A Chronicle of the Ackerley Group's First 25 years by Dan Evans
Winning the West for women : the life of suffragist Emma Smith DeVoe by Jennifer M. Ross-Nazzal
494 more glimpses of historic Seattle by Paul Dorpat
Rites of passage : a memoir of the sixties in Seattle by Walt Crowley
Ipse dixit : how the world looks to a federal judge by William L. Dwyer
25 more
The First Seattle Catalogue by Colin Dobson
Once upon a time in Seattle by Emmett Watson
Neighbor Power : Building Community the Seattle Way by Jim Diers
Reading Seattle : a prose anthology by Peter Donahue
Warren G. Magnuson and the shaping of twentieth-century America by Shelby Scates
Dr. Sam : soldier, educator, advocate, friend; an autobiography by Samuel E. Kelly
The final forest : the battle for the last great trees of the Pacific Northwest by William Dietrich
Before Seattle rocked : a city and its music by Kurt E. Armbruster
The weather of the Pacific Northwest by Cliff Mass
Henry M. Jackson : a life in politics by Robert Gordon Kaufman
Emerald City : An environmental history of Seattle by Matthew Klingle
On American Soil : How Justice Became a Casualty of World War II by Jack Hamann
Purple Flat Top : in pursuit of a place by Jack Nisbet
Skid road : an informal portrait of Seattle by Murray Cromwell Morgan
Seattle in Black and white : the Congress of Racial Equality and the fight for equal opportunity by Joan Singler
Gay Seattle: Stories of Exile and Belonging by Gary Atkins
The Egg and I by Betty Bard MacDonald
Muslim Women of the Fergana Valley: A 19th-Century Ethnography From Central Asia by V. P. Nalivkin
The dry years : prohibition and social change in Washington by Norman H. Clark
Becoming a citizen activist : stories, strategies, and advice for changing our world by Nick Licata
A language older than words by Derrick Jensen
Blessed Unrest : How the Largest Movement in the World Came into Being, and Why No One Saw It Coming by Paul Hawken
Remembering Silme Domingo and Gene Viernes : the legacy of Filipino American labor activism by Ron Chew
Seattle: Then & Now by James Madison Collins
The Task, and Selected other Poems by William Cowper
Fewer