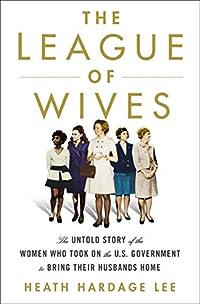 The League of Wives: The Untold Story of the Women Who Took on the U.S. Government to Bring Their Husbands Home

"The true story of the fierce band of women who battled Washington--and Hanoi--to bring their husbands home from the jungles of Vietnam. On February 12, 1973, one hundred and fifteen men who, just six years earlier, had been high flying Navy and Air Force pilots, shuffled, limped, or were carried off a huge military transport plane at Clark Air Base in the Philippines. These American servicemen had endured years of brutal torture, kept shackled and starving in solitary confinement, in rat-infested, mosquito-laden prisons, the worst of which was The Hanoi Hilton. Months later, the first Vietnam POWs to return home would learn that their rescuers were their wives, a group of women that included Jane Denton, Sybil Stockdale, Louise Mulligan, Andrea Rander, Phyllis Galanti, and Helene Knapp. These women, who formed The National League of Families, would never have called themselves "feminists," but they had become the POW and MIAs most fervent advocates, going to extraordinary lengths to facilitate their husbands' freedom--and to account for missing military men--by relentlessly lobbying government leaders, conducting a savvy media campaign, conducting covert meetings with antiwar activists, most astonishingly, helping to code secret letters to their imprisoned husbands. In a page-turning work of narrative non-fiction, Heath Hardage Lee tells the story of these remarkable women for the first time in The League of Wives."--Biography.… (more)

Though the wives tried to play by the good military wife handbook and follow the LBJ administration's request for staying on the down low, they gave up as the years dragged on. The feds and the military had no plans on how to act with a rogue government that was not observing the Geneva Conventions (though why would you expect a rogue government to do so?). The wives cooperated with an intelligence officer to send coded messages, they traveled, they worked on public opinion. They organized non-political groups (local and national), held conventions, met with the press and officials around the world, wrote letters and did everything they could to help bring their husbands home. Now, did the really have any effect? Wasn't the general public (the great unwashed, not the officers' families, see below) tiring of sending their sons off to Vietnam to be killed? Since many of the men had been held for 5-7 years, did the women really "take on the government" to "bring their husbands home"? They certainly tried, but were they truly successful or was the general public really just over it?

Lee does point out that, largely, POWs in Vietnam were of a different class and rank than in previous wars. These were aviators--highly educated, often upper class, highly trained, and trained for resistance in case of capture (chapter 2). For the most part their wives were also highly educated (over educated, for women who were expected to be perfect wives) and often from the upper class. And she admits that because these were a different sort of people, the pilots were more valuable to the military--though the military and the government was not acting on that. I found this assumption that, because of their social status, that these men were more important than POWs in past wars. They could certainly be seen as more valuable to the military--who was not making any effort to get them back--but wouldn't that also make them more valuable for the North Vietnamese to keep?

There were some areas I would have liked to see more information on. 1) Finances: the military had no way to get women their husbands' paychecks when they were POWs, creating severe economic strain. Only many of these women were NOT poor--Lee mentions constant flying back and forth, private college, and prep school (good lord). But what about the MIA wives? Presumably they were not being paid since they were MIA. Did they need to work? Did they need to repay paychecks when their husbands were declared dead? 2) MIA wives in general. The book ends with them largely being shuffled offstage as their husbands were declared deceased. They weren't invited to parties and did not appear on newspapers and in magazines. Were they given any help at all? Did the League do anything for these women that had worked so hard, only to have their dreams crushed? 3) Did any branch of the military being using the SERE training for more men? Lee suggests this training limited the PTSD in the POWs--the one wife she studied who's husband did come home with PTSD was army and not a pilot, so presumably did not go through SERE.

Pet peeve: throughout this book women are generally referred to by their first names. Children by their first names. Soldiers by first/last or first if mentioned with their wives. Government officials and
other men by their last names. Here in this book announcing the role they played in the war, and they are still being treated like children.
————
Thank you to NetGalley and St Martin's Press for providing me with a digital galley of this book in exchange for an honest review.… (more)
1 more
LibraryThing member stevesbookstuff
In The League of Wives Heath Hardage Lee tells the inspiring story of the wives of American POWs and MIAs during the Vietnam War. The women persevered through the intransigence of the North Vietnamese regime, and the "keep quiet" policy of the Johnson administration to become "partners" with the Nixon administration. The League they formed was instrumental in ensuring that Kissinger's peace plan to end America's involvement in Vietnam included demands on the return of POWs and the accounting for MIAs.

There are a number of wives who take part in this story, and at times it can get a little bit overwhelming keeping track of who is who. But other than that, I really liked this book and learned a lot that I'd forgotten or never knew about that time in American history.

This is a book that, like Hidden Figures, sheds light on a little remembered group of women who had a strong role to play in historical events. The author is a historian and museum conservationist who began what eventually became this book with the papers of Phyllis Galanti.

Phyllis Galanti's husband was a POW, and she was active in the wives movement that led to forming the national League. Galanti, a native of Richmond VA like the author, passed away in 2014 and her papers were subsequently donated to the local historical society. Starting out by reviewing Galanti's papers, Heath Hardage Lee spent the next five years researching and writing this book. She provides a wealth of detail that really makes the book come to life.… (more)
Fewer

The Hello Girls: America's First Women Soldiers by Elizabeth Cobbs
Come Fly the World: The Jet-Age Story of the Women of Pan Am by Julia Cooke
Code Girls: The Untold Story of the American Women Code Breakers of World War II by Liza Mundy