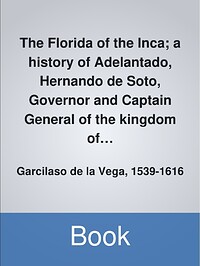 The Florida of the Inca; a history of Adelantado, Hernando de Soto, Governor and Captain General of the kingdom of Florida, and of other heroic Spanish and Indian cavaliers,

Perhaps the most amazing thing of all about Garcilaso de la Vega's epic account of the De Soto expedition is the fact that, although it is easily the first great classic of American history, it had never before received a complete or otherwise adequate English translation in the 346 years which have elapsed since its publication in Spanish. Now the Inca's thrilling narrative comes into its own in the English speaking world. Hernando de Soto's expedition for the conquest of North America was the most ambitious ever to brave the perils of the New World. Garcilaso tells in remarkably rich detail of the conquistadors' wanderings over half a continent, of the unbelievable vicissitudes which beset them, of the Indians whom they sought to win for King and Church and by whose hands most of them died, of De Soto's death, and of the final pitiful failure of the expedition.… (more)

The explorers of South America by Edward J. Goodman
The Incas; the royal commentaries of the Inca, Garcilaso de la Vega, 1539-1616. by Garcilaso de la Vega, 1539-1616
Facts and artifacts of ancient Middle America : a glossary of terms and words used in the archaeology and art history of pre-Columbian Mexico and Central America by Curt Muser
Prehistory of the Americas by Stuart J. Fiedel
The new world; the first pictures of America, by Stefan Lorant, 1901-
5 more
Florida archaeology by Jerald T. Milanich
Archaeology of Precolumbian Florida by Jerald T. Milanich
The Tainos : rise & decline of the people who greeted Columbus by Irving Rouse
Native Americans before 1492 : the moundbuilding centers of the eastern woodlands by Lynda Shaffer, 1944-
Skywatchers by Anthony F. Aveni
Fewer