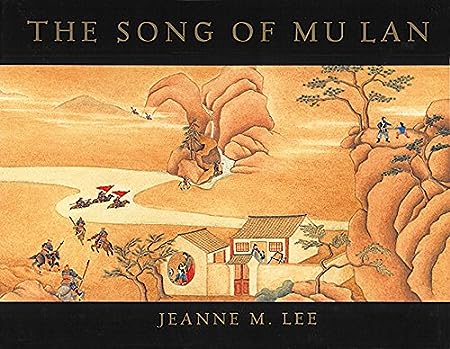 The Song of Mu Lan

Mu Lan is at her loom when she hears the Emperor's call to arms. She rides off to war in her father's stead, embarking on a journey of ten thousand miles that takes her away from home for ten years. Her courage and valor bring her to the Emperor's attention and to the Golden Court. When offered whatever she wishes as a reward, she asks only to go home. There she surprises her mother and father, sister and brother--but it is her comrades in arms who are most surprised of all. The Song of Mu Lan is closely translated from an ancient text and echoes the rhythms of Chinese, which is here faithfully reproduced in original calligraphy by Chan Bo Wan, the artist's father. Jeanne M. Lee has rendered the panorama of characters in silken watercolors, providing a lush counterpoint to the spare, elegant text.… (more)

LibraryThing member hgold
The art is beautifully done in water colors, which looks very much like the traditional Chinese ink and brush paintings. The writing is great because it keeps the rhythm of the Chinese poem as much as possible, and includes the original Chinese text.
4 more
LibraryThing member derbygirl
(easy, picture, realistic fiction, multicultural, folklore)This story follows the tale of Mulan, a young oriental woman. When the call to battle is made, her father has no male heirs to heed the call. Mulan feels compelled to answer that call. She dons traditional male warrior gear and hides the fact that she is a woman. Mulan goes on to accomplish tremendous feats in battle. At the end of the war, she returns home with her fellow soldiers and finally removes her facade revealing she is actually a woman. Her heroic feats are still just as appreciated. The beautiful and insightul four lines on the last page(which I will leave for your discovery) lead me to believe that the lesson here is when men and women join and rely on their strengths together, nothing is insurmountable.
The endpages of the book are interesting in that the ancient text from which the story is derived is reproduced. The reproduction is created by the original artist's father. On each page of the book is oriental text that also tells the story. A fun activity would be to have the children try their hand at drawing oriental letter characters.… (more)
LibraryThing member jenvid
This is a folk song about a girl who joins the army, because her father is too old, and there is no son in the family. She disguises herself because women were not allowed to join the military. It is a wonderful tale about making your parents proud. In the end, an interesting note states that this poem is still taught to the children in China and it is even performed in Chinese operas. I really liked the cool colors that are seen in this book. It was very tranquil to look at. This book would be great to tie into a lesson on Asian folklore.… (more)
LibraryThing member LauraMcQueen
The Song of Mu Lan is the story of a girl who dresses as a warrior and goes to war in place of her elder father. Her and her commrads then win the war and come home to the "Son of Heaven". Instead of asking for gold like most others Mu Lan only asks for camels to get home. When she gets home everyone rejoices and she dresses as a girl again. Even after twelve years her comrades still do not know that she is a girl. This is a great story to show children that one gender is just as good as the other. It is also an empowering story for young girls.… (more)
LibraryThing member alexanme
wonderful! THIS is how u respectfully translate a traditional folk story as a children's book!
Fewer

Science in Ancient Egypt (revised) (Science of the Past) by Geraldine Woods
Pegasus by Marianna Mayer
Ancient India (People of the Ancient World) by Virginia Schomp
Life in Ancient China (Peoples of the Ancient World) by Paul Challen
Encounter (Voyager Books) by Jane Yolen
15 more
The World of King Arthur and His Court: People, Places, Legend, and Lore by Kevin Crossley-Holland
Buddha Stories by Demi
In the Land of the Jaguar: South America and Its People by Gena K. Gorrell
Not One Damsel in Distress: World Folktales for Strong Girls by Jane Yolen
Ancient Egypt (Make-It-Work! History) by Andrew Haslam
The Librarian Who Measured the Earth by Kathryn Lasky
The Ancient Egyptians (People of the Ancient World) by Lila Perl
Cupid and Psyche by M. Charlotte Craft
Ancient Greek War and Weapons (People in the Past) by Haydn Middleton
King Midas and the Golden Touch by Charlotte Craft
The Dragon's Tale: and Other Animal Fables of the Chinese Zodiac by Demi
The Ancient Chinese (People of the Ancient World) by Virginia Schomp
Trail of Tears (Step-Into-Reading, Step 5) by Joseph Bruchac
Tikki Tikki Tembo by Arlene Mosel
Iliad (The Classics) by Rosemary Sutcliff
Fewer