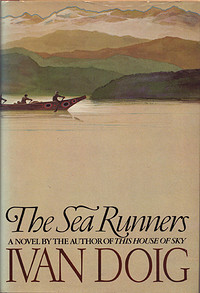 In 1853, four Scandinavian indentured laborers in Russian Alaska steal a canoe and begin to paddle south toward the mouth of the Columbia River, twelve thousand miles away. A tense, shrewdly modulated sea adventure in which a quartet of indentured Scandinavians attempt escape from Russian America (1853 Alaska) in a stolen canoe, a Pacific journey far more rugged "than the plain arithmetic of its miles." Of the four, only one is seaworthy at the start, but each pulls his own as they paddle through snowstorms and dangerous straits, consume their rations and personal reserves. Melander is the beached seaman who conceives the plan and navigates; Karlsson's the quiet, constant mate; Braaf is the camp thief who outfits the voyage (he remains the least developed of the lot). And Wennberg, his trigger "always this close to click," is the bitter, volcanic fourth who muscled in; kept in check by Melander, he adds a blacksmith's strength to the paddling. But Melander is killed in the sole encounter with coastal tribesmen, and Karlsson, Wennberg's chief antagonist, must take over for the fugitive alliance to hold: he alone can read the map. Doig deftly pilots this mismatched crew through a punishing journey to Astoria (Oregon), maintaining a high level of tension, including casual portions of history and geography (as handily as in Winter Brothers), testing the rocky emotional waters of desperate men. The two squabblers nearly attempt a communion, but the moment "quickened past them": the shaky truce resumes. And readers who hailed This House of Sky and Winter Brothers will find this another safe harbor, for Doig continues as a prose writer of exulting originality. (Verbs become nouns, nouns become verbs, and observations resonate: the reserved Karlsson is "A man built smoke-tight.") Distant cousin to Deliverance--the writing is more lyrical, the crew less fiercely manipulated: a polished chronicle of physical and spiritual endurance.… (more)

LibraryThing member Maryka
This is only the second Doig book I've read, and I loved the language--it's simply gorgeous. A few choice phrases: galumphing strides, quizzing glance, winded lazed to a breeze, an apple of a face, toplofty build, boulder-stilll, well-bottom faith, and that hive of fingers. The story here is of raw adventure along the Alaska, Canada, and Pacific Northwest coast. A great read.… (more)
6 more
LibraryThing member streamsong
In the mid-1800’s, Alaska was a Russian territory. Natives were used by the Russians for menial labor; more skilled labor, such as blacksmithing, was often provided by Scandanavians, indentured for seven years in exchange for their passage to the Russian territory. This story is based on a true event. Four of these men, tired of being treated as slaves, stole a native canoe and set off southward to the American port of Astoria. The distance paddled, from what would later be known as Sitka to the Oregon coast is approximately 1000-1200 miles. This is a staggering as Doig points out that this distance would be equal to starting from the coast of Norway and paddling to the coast of Italy. In addition, these men managed their feat in midwinter, escaping during Christmas celebrations.

The coast they travelled is a maze of channels with literally hundreds of islands and passages. The battle against the sea is vividly described—storms, fog, the totally uninhabited coast except for a few hostile natives and the sheer distance they had to paddle produced not only physical but mental challenges. The beautiful but deadly setting is wonderfully described. I found the characters believable and well realized. The plot had several unexpected twists that kept me turning the pages.

I have been a fan of Ivan Doig’s storytelling for many years now. This is an early work of Doig’s, obvious in that his writing style is far less polished than in his later books. There is an odd mix of very convoluted, incredibly long sentences, followed by staccato partial sentences. I found this combination hard to read and it made it difficult for me to get into the storyline. Nevertheless, after feeling that I was slogging through the first few chapters, Doig’s storytelling once again caught me and I was hooked.

Recommended with some reservations about the writing style.… (more)
LibraryThing member Esta1923
“The Sea Runners” by Ivan Doig is the imaginary fleshing out of a brief news report. It is true that in 1853 Russia had an outpost in Alaska and did employ/enslave laborers for their lucrative fur trade. Based on an item in the Oregon Weekly Times this book re-creates a journey four escapees made. Six chapters acquaint readers with the plight of the workers, their complicated plans for escape, and the difficulties of the trip south.

These men were united in their desire to reach freedom but were of vastly differing personalities. Readers get to understand them through Doig’s imagined dialog. His account of the perils they faced is gripping. It is remarkable that any survived.

A vast amount of research went into this novel, and readers who appreciate “adventure tales” will be well served.… (more)
LibraryThing member LibraryCin
2.5 stars

It's the mid-1800s and four Swedish men decide to leave “Russian America” (now Alaska) for Astoria, Oregon. They canoe alongside the coast to get there.

I couldn't get interested in the book for the first 1/3 of the book or so. There were a lot of names – people and places – and I just couldn't focus. It did get a little more interesting after they were finally on their way, but overall, it was still pretty slow for me. Looking at other reviews, it appears I am in a minority on this. I did find it interesting that this was based on a true story.… (more)
LibraryThing member bookczuk
I think my brain is on vacation— the writing on this was lovely, but I found the story too slow paced for me right now. Fascinating history, even if it makes for poor red-eye flight reading.
LibraryThing member LGCullens
Over the years I've throughly enjoyed Ivan Doig's books set in Montana, finding them engrossing and comfortable. A departure for me, this book exhibits the exceptional versatility of the masterful writer Ivan Doig truly is. This story comes alive through fully fleshed out characters, human and natural interactions, and especially the uncompromising narrative and dialogue composition, all pulling the reader into the times, place, and characters of the story.

The book blurb hardly does justice to the story. The storyline one might say is as straightforward as a travelogue, but surprising in its brilliant plotting. A brief foreboding in the opening chapter propels the reader through the story setup and deep into the tempest of the journey, seeking a revealing and possible consequences. It's essentially a story about the courage and frailty of life.

As a reader, this is a story that will truly transport you. If you are a writer and haven't read this story to improve your craft, tsk, tsk.… (more)
LibraryThing member SeriousGrace
Four men escape their Russian-controlled work camp in a stolen canoe: Braaf, Karlsson, Melander, and Wennburg. Courageous, when you consider they started in New Archangel (Sitka), Alaska in the mid-1800s. Herculean, when you add how while paddling their way to Astoria, Oregon they faced rough ocean swells, unrelenting weather, unfamiliar coastal environments, hostile Tlingit Indians, starvation, sheer exhaustion from relentless physical toil, and an instinctual deep distrust of one another. They were not friends before they made their escape. Even though Sea Runners is fictional it is based on a very similar true story of a daring escape. Doig learned of Karl Gronland, Andreas Lyndfast, Karl Wasterholm, and a fourth man who was killed by Indians during the journey. From these actual men sprung the stunning adventure of Braaf, Karlsson, Melander, and Wennburg. You could say the sea was a fifth character as Doig's words makes the ocean come alive with emotion.… (more)
Fewer