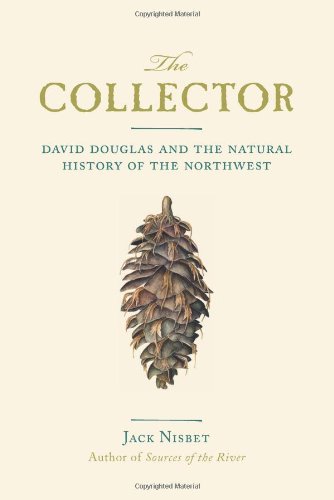 The Collector: David Douglas and the Natural History of the Northwest

The story of David Douglas, the premier botanical explorer in the Pacific Northwest and other areas of western North America. Douglas' discoveries include hundreds of western plants--most notably the Douglas Fir. The Collector tracks Douglas, from his humble birth in Scotland in 1799 to his botanical training under the famed William Jackson Hooker to his adventures in North America discovering "exotic" new plants for the English and European market.

LibraryThing member joshlopez
The Collector is a biography on David Douglas and details his work on horticulture in the Scottish Highlands, North America, and Hawaii. The book has an extensive amount of information on him and his life. It tells of how he introduced several hundred plants to Europe and how over eighty species of plant and animal have douglasii in their scientific names in honor of his work with plants. David Douglas is most noted for the Douglas Fir, a tree that grows mostly in North America. He was the first to introduce the tree in 1827.
The book is a good account of Douglas’ life and gives lots of information on his achievements and impact on the scientific community. The book is, however, slightly boring and not a read I would recommended to elementary students. The subject matter is easy enough to understand, but the writing is late high school and college level.… (more)
2 more
LibraryThing member Gwendydd
This is the story of the journeys of David Douglas through the Pacific Northwest. Douglas was sent to the Northwest by the Royal Horticultural Society to study plants, catalog them, and send specimens back to England.

I was excited to see this book because I live in the Pacific Northwest and I was hoping to learn some more local history: I was hoping that I would learn about the plants around me, about the history of settlement here, and about Native American culture. Unfortunately, although all of these things are integral to David Douglas's story, Jack Nisbet didn't bother expounding on any of them.

Instead, the book is basically a summary of Douglas's journals, essentially just a list of everything he did. He went to this place and collected this plant, then he went to that place and slept in a tent, then he went somewhere else and climbed a tree. Nisbet provides very little narrative structure or extra information about anything Douglas encountered. The book doesn't even have any pictures of plants, so I learned nothing about native flora, other than Douglas sent seeds back to England. Native Americans are mentioned quite frequently, but they are discussed rather abstractly, and I didn't feel like I learned much about their culture. There is a little bit of information about how British settlers got along with Native Americans, but it is only mentioned in passing, and I didn't feel like I got a good overall picture of their relationship.

I hoped that the story of David Douglas would be used as a springing board for the history of the Pacific Northwest and its fascinating plant life, but instead, this really is just the story of David Douglas and his journeys. It is more of a list of events and actions than a true story with any narrative structure or argument.… (more)
LibraryThing member jphamilton
Vicky was the one who picked this book up at the Waucoma Bookstore in Hood River, Oregon. It tells of the travels of the Scottish naturalist David Douglas, as he saw and collected plant, mineral, and animal samples in the American Northwest, Hawaii, and even the Galápagos Islands (which he visited before Darwin's famous trip) between 1824 and 1834 for the London Horticultural Society. It was fascinating to think of this man traveling to so many places that were barely, if ever, seen by white men before. He was heavily dependent upon the friendships that he made with the native tribes, traders, and others who knew where to go to find the species and sites he sought.

Personally, I find myself pulling back at times from these early narratives that describe a very different time and sensitivity, when maybe shooting a bald eagle or some seals for dinner was just fine in everyone's mind. My hairstyle helps me take the pose of a "sensitive ponytailed man".

Our visit to the Northwest was over before we got to see much of the region, but I was starting to get a sense of the wildness ... somewhat like the backwoods of my native Vermont, but with larger mountains, trees and 100% more ocean waters. Without the white men who explored and collected all those samples, our country's advancement and growth would have taken so much longer. If I had a glass of libation, I would raise it to these brave men that boldly went where men of their complexion had never gone before. Remember, many of these men were lost and never heard from again, or, like Douglas, died traveling the wilderness in search of knowledge, and a little fame.… (more)
Fewer

Northwest Passage: The Great Columbia River by William Dietrich
The Good Rain: Across Time & Terrain in the Pacific Northwest by Timothy Egan
Visible Bones: Journeys Across Time in the Columbia River Country by Jack Nisbet
Sources of the River: Tracking David Thompson Across Western North America by Jack Nisbet
The Northwest Coast: Or, Three Years' Residence in Washington Territory by James Gilchrist Swan
18 more
Skookum: An Oregon Pioneer Family's History and Lore by Shannon Applegate
Skid Road. An Informal Portrait of Seattle. by Murray Morgan
A Guide to the Indian Tribes of the Pacific Northwest (The Civilization of the American Indian Series) by Dr. Robert H. Ruby M.D.
The Mapmaker's Eye: David Thompson on the Columbia Plateau by Jack Nisbet
Puget's Sound: A Narrative of Early Tacoma and the Southern Sound by Murray Morgan
Flora of the Pacific Northwest: An Illustrated Manual by C. Leo Hitchcock
Ancient Places: People and Landscape in the Emerging Northwest by Jack Nisbet
Plants and Animals of the Pacific Northwest: An Illustrated Guide to the Natural History of Western Oregon, Washington, and British Columbia by Eugene N. Kozloff
Island Year by Hazel Heckman
Whistlepunks & Geoducks: oral histories from the Pacific Northwest by Ron Strickland
Winter Brothers: A Season at the Edge of America by Ivan Doig
Wintergreen: Rambles in a Ravaged Land by Robert Michael Pyle
A field guide to the Cascades & Olympics by Stephen Whitney
Northwest Weeds: The Ugly and Beautiful Villains of Fields, Gardens, and Roadsides by Ronald J. Taylor
Stepping Westward: The Long Search for Home in the Pacific Northwest by Sallie Tisdale
The Restless Northwest: A Geological Story by Hill Williams
The Natural History of Puget Sound Country (Weyerhaeuser Environmental Books) by Arthur R. Kruckeberg
Wonderful Life: The Burgess Shale and the Nature of History by Stephen Jay Gould
Fewer