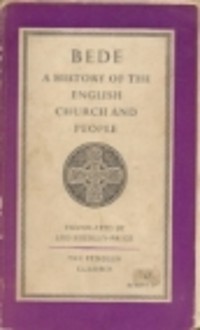 A history of the English Church and people (Penguin classics)

This masterpiece of medieval historical literature constitutes the first account of English history. Written in 731 AD by a Northumbrian monk, it chronicles the growth of Christianity in Anglo-Saxon England. The Venerable Bede's account starts with the Roman invasion led by Julius Caesar in 55-54 BC and extends to the date of its completion. It profiles the kings, bishops, monks, and nuns involved in the formation of the island nation's religion and government.Known today as The Father of English History, Bede was among the most learned man of his time. His History illuminates a period otherwi

LibraryThing member BirdBrian
So first of all: did you know there used to be an English king in the 4th century by the name of Sexwulfe? SEXWULFE?! That’s probably the coolest name ever. How did I get so far in life, not knowing this was a real name? And why aren’t more people (David Bowie, specifically) changing their names to SEXWULFE?

Putting that aside, this book was an interesting mix of history and fiction. Written by the monk Bede in the 7th century, it gives readers a general feel for what was going on in Great Britain at the time. I say “general feel” because you really can’t go by the letter of what Bede is saying here, because he sprinkles the narration with accounts of miracles designed to impress and astound pagans with the power of the Christian God.

The dubious history of some of these chronicles doesn’t spoil anything for me. As long as I’m clear that I’m not reading straight-up history, I don’t mind reading about holy daggers that cure illness, magical wooden posts which don’t burn, and holy men who drive out demons. That Bede wrote any of this down (and maybe even believed it) is just part of the picture of England in 600’s A.D. Christianity was still competing with assorted pagan religions for the hearts and minds of …well, mostly of the regional rulers. Once you had them in pocket, it seems the public was compelled to follow. That’s why so there are so many tales in here of pagan kings who embraced Christianity, and whom Heaven rewarded with drastically improved fortunes (usually on the battlefield). About half of these stories show the king then lapsing back into paganism and suffering for it, only to save the day by re-embracing Christianity –this time permanently. It does get a bit repetitive.

As far as actual history goes, the book faithfully describes a lot of bloody warfare between English, Angles (immigrants from Denmark), Picts in the North (modern day Scotland), the Irish, British, and assorted lesser others. I assume the names of kings, and the lineages described are accurate, but I’m not sure why I think that, given the other liberties Bede has taken.

There are quite a lot of people named Egbert, and Cuthbert, and Ekelbert other things that sound like that. It can be confusing, trying to keep track of them all.

If you’re trying to develop a broad view of British history, this book does a nice job picking up where John Morris’ Londinium leaves off. Julius Caesar first set foot on British soil in 55 B.C. From that date on, Roman power grew in fits and starts, with London a center of first military and eventually economic power. While Rome suffered repeated humiliation in wars with the Huns and Vandals, Britain remained safely remote from these, and in fact benefitted economically as a reliable supplier of materiel for Roman armies in Gaul and Germania. The gravy train ended, of course, with the complete destruction of the Western Empire in the 5th century. England might have been on its own after that, but it was really the Christian church which maintained cultural ties between Britain and Rome. That’s what this book illuminates so well. Although Roman soldiers could no longer be relied on to defend the Northumbrians from the Picts, the Vatican still had spiritual authority over monks like Bede, and through the many active and robust monasteries, members of the British congregation could learn Latin, and become versed in the classics of history and literature. The church even had an active hand in shaping politics in the British Isles (see above). Thus, the picture which emerges is that the Catholic Church seamlessly supplanted the Romans as the framework on which England was now (loosely) integrated with other components of the former empire in language, architecture, political thought, religion, science, history, and philosophy. Good stuff.… (more)
11 more
LibraryThing member moncrieff
The great history of England in the early middle ages.
LibraryThing member bibliothecarivs
Bede's History (c. AD 730) provides a fascinating look at how Christianity moved across England during the first millennium. The wars and heresies, miracles and conversions all make for an interesting read which earned its author the title "Father of English History" and a place as one of my heroes.
LibraryThing member carterchristian1
Amazing he had access to such a wealth of information
LibraryThing member fastred
One of the classics of early English history. A very good read, but not (by any means) an unbiased approach.
LibraryThing member kencf0618
Surprisingly good emic read of early English history.
LibraryThing member drmaf
An interesting eyewitness view of England in the process of formation. Far from being the dreary "Venomous Bede" which many people seem to remember from school, this is an engaging and sometimes quite light-hearted account of life in the early Church. And there are Vikings! Some might find the piety excessive, but that was how it was in those times and it doesnt detract from either the readability or the importance of this lovely little book.… (more)
LibraryThing member DinadansFriend
This is primarily an ecclesiastical record, but the best we have about a time period that has only the Anglo Saxon Chronicles as another written source. The writing is pedestrian, but it's a translation, so one could hope the original is spritely. But we have it at all, so....
LibraryThing member Helenliz
More readable than I thought it would be. What he doesn't tell you is frustrating, but almost as interesting as what he does.
LibraryThing member deusvitae
Bede's chronicle of the rise, expansion, and consolidation of Roman Catholicism among the Anglo-Saxon tribes in England from the fifth through the early part of the eighth centuries.

Bede is one of our primary sources for the period. His chronicle thinks highly of the bishops and monks from Augustine onward as well as those rulers who converted or proved zealous for the faith. A lot of miracle stories are recorded.

Bede is not quite as kind about British/Celtic Christianity. He recognizes their greater antiquity and speaks of the developments which led to their faith, but regarded them generally in contempt. The big concern throughout is when Easter should be observed: we today may find it trifling, but for Bede it proves almost all-important. One needs to have the virtues of an Aidan to be able to overcome that bias.

In Bede's account can be seen the imposition of the "order" of Roman Catholicism on Celtic Christianity via the conversion and continual correction of the English by Augustine, sent by Pope Gregory, and those who came after him.

This version is highly readable with helpful notes and also includes a letter of Bede to a bishop and Cuthbert's chronicle of Bede's death.

An indispensable resource to understanding the development of Christianity in Anglo-Saxon England.… (more)
LibraryThing member bibliothecarivs
My fourth reading of Bede's magnum opus and I struggled for several reasons: it was my first time not reading my beloved Sherley-Price translation and my first time reading the History during a worldwide pandemic and very serious family health crisis. Thank goodness for the good people at LibriVox.org who had recorded an audiobook of Sellar's translation.… (more)
LibraryThing member Drakhir
A fascinating account of the history of England and further lands in a period when often this work is the only extant chronicle. An interesting delve into the thoughts and beliefs of a superstitious people, and when not going on and on and on about the dating of Easter, often insightful.
I should cut Bede some slack about Easter though - it seems like the history of the Church from the fall of Rome until the 8th Century, in England at least, was largely concerned with how Easter was calculated, which led to most of the wars and executions, banishments and excommunications that were so frequent.… (more)
Fewer

The Illustrated Bede by John Marsden
Anglo-Saxon England (Oxford History of England) by Frank M. Stenton
The Anglo-Saxons by James (ed) Campbell
The Book of Margery Kempe (Oxford World's Classics) by Margery Kempe
An English Empire: Bede, the Britons and the Anglo-Saxon Kings (Origins of England S.) by N.J. Higham
4 more
The Church in Anglo-Saxon Society by John Blair
Manuscripts from the Anglo Saxon Age by Michelle P. Brown
The Alexiad by Anna Comnena
Anglo-Saxon Kingdoms by Claire Breay
Fewer