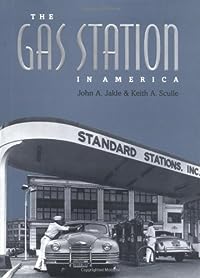 The Gas Station in America (Creating the North American Landscape)

by John A. Jakle

In the first volume of their celebrated "Gas, Food, Lodging" trilogy, John Jakle and Keith Sculle offer a comprehensive history of the American gas station, exploring every aspect of this roadside icon, including its evolving architectural identity; its place in both the American landscape and popular culture; the corporate decisions that determined its look and location; its metamorphosis into the mini-mart; and its role as the most visible manifestation of one of the world's largest industries. From the quaint curbside filling stations of the 1910s to the novelty designs of the 1920s (when stations were built to resemble English cottages, Greek temples, Dutch windmills, and Spanish missions) to the Bauhaus-inspired stations of the 1930s to today's nationwide chains of brightly lit look-alikes, The Gas Station in America is the definitive book on the subject. Richly illustrated with more than 150 images--postcards of gas stations, vintage ads, maps, and other memorabilia--this book bears witness to an economic and cultural phenomenon that continues to be a defining part of the American experience.… (more)