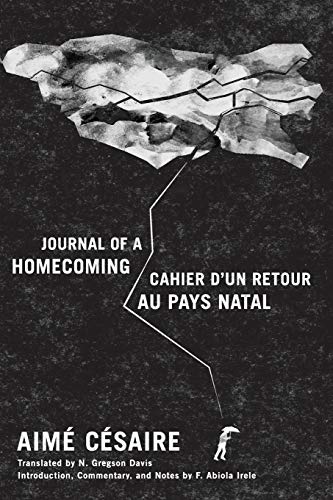 Aimé Césaire's masterpiece, Notebook of a Return to the Native Land, is a work of immense cultural significance and beauty. This long poem was the beginning of Césaire's quest for négritude, and it became an anthem of Blacks around the world. Commentary on Césaire's work has often focused on its Cold War and anticolonialist rhetoric--material that Césaire only added in 1956. The original 1939 version of the poem, given here in French, and in its first English translation, reveals a work that is both spiritual and cultural in structure, tone, and thrust. This Wesleyan edition includes the original illustrations by Wifredo Lam, and an introduction, notes, and chronology by A. James Arnold.

LibraryThing member thorold
Aimé Césaire is one of the key figures in postcolonial literature, and his Cahier is one of its seminal texts, discussed on just about every course on the subject. In fact it's so seminal, and its historical importance and relevance to later generations of writers are so well explained in the textbooks, that it's scarcely ever necessary actually to look at it. Which is a shame, because as well as being a key moment in literary history, it is an interesting and rewarding poem in its own right.

It's a surprisingly modest work in scale: a free-verse poem that takes up about thirty pages in print, so that it's not at all inconceivable that it would fit into an actual "notebook" in manuscript. To summarise something that can't and probably shouldn't be summarised, Césaire, who was studying in Paris at the time, imagines himself revisiting Martinique, watching what's going on at the break of dawn ("au bout du petit matin") from the point of view of a sparrow-hawk. And what he sees is not attractive or nostalgic: everything is tainted with dirt and disease and the damage done by slavery and colonialism. He looks back in time to see slaves being tortured by landowners, or Toussaint Louverture in his cell in the Jura (surrounded by the "white death" of snow). He thinks about a black man he has seen on a tram in Paris, apparently crushed by his sense of inferiority, and he comes to the realisation that blackness - Négritude - is something to celebrate and assert. The "great black hole" he wanted to drown himself in a little while ago is now the place where he can fish out and exploit "the night's malevolent tongue".

There is a lot of anger here, but it's expressed in surprisingly beautiful and complex language. Césaire was a poet first of all, even if he did end up devoting the last sixty years of his life to politics. You can get a lot of enjoyment out of the sweep and rhythm of his words, and the baffling variety of registers he uses. Unfortunately for us, he was also trained as a classics teacher, and had a habit of pillaging the remoter reaches of the Latin and Greek dictionaries for words that ought to but didn't - as yet - exist in French. When you read Cahier, it is often more difficult to come to terms with these obscure classical coinages than with the handful of specifically Caribbean terms he uses. At a few points this leads to real problems: crucially, for example, no-one has ever been quite sure what Césaire meant by the last word of the text, verrition - it possibly has something to do with turning or sweeping, but if so, why is it qualified by the adjective immobile?

(Rosello mostly translates these words into equally obscure or made-up English terms, to preserve the difficulty of the original. Thus verrition becomes "revolvolution". This is probably a trick you can only get away with in a parallel text: in a standalone translation it would be rather baffling.)

Eighty years on, it's easy enough to see the blind spots that weren't so evident in 1939 when the first version of the Cahier appeared. There's a lot of declamatory Whitmanesque penis-waving, and not much role for women in Césaire's view of the world; many people have pointed out how négritude's simplistic race-based focus forces it to overlook many of the ethnic and social complexities of the Caribbean, and more recently Patrick Chamoiseau and his co-authors in Éloge de la Créolité have challenged Césaire's exclusion of Creole language and culture. (Chamoiseau's novel Texaco is in many ways a direct challenge to the attitudes expressed in the Cahier, but it is careful to treat Césaire the person and politician with considerable respect and affection.)

The Bloodaxe edition comes with a very comprehensive introductory essay by Professor Rosello, who also did the parallel text translation. Without taking sides noticeably, she sets out the background to the poem's composition and discusses its reception and current (1995) views of its importance, and provides a fairly comprehensive bibliography. One rather striking omission is that she doesn't get into any detail about the textual history of the poem, beyond remarking that it first appeared almost unnoticed in a review called Volontés in 1939, and that it only really came to the attention of the critics in a new edition with a preface by André Bréton in 1947. From what I've read elsewhere I know that Césaire revised the poem quite heavily on at least three occasions, so it seems at least odd not to mention which version of the text is being used and why.

If you can live with that, this edition seems to be a very good way to approach the poem if French isn't your first language. Rosello's translation is fairly literal but by no means plodding, so depending on how good your French is, you can switch back and forth between the original and the translation quite comfortably.… (more)
2 more
LibraryThing member Aberjhani
Aime’ Cesaire’s “Return to My Native Land,” one of the great prose-poetry works of the twentieth century, was parented by not one but three literary movements: the Negritude Movement, the Harlem Renaissance, and French Surrealism. The book’s very rich suffusion of cultural and political nuances may be attributed to the Harlem Renaissance and the Negritude Movement while its linguistic dexterity and philosophical daring would have to acknowledge some allegiance to French surrealism. The result is a masterful examination of a soul simultaneously created by and torn between two cultural sensibilities: the European and the African. Like James Baldwin, Albert Camus, and Frantz Fanon in their various works, Cesaire in “Return to My Native Land” take racism and class oppression to task at the same time that he delves most deeply into the greater nature of the human condition itself.

Aberjhani
author of "Encyclopedia of the Harlem Renaissance"
and "Visions of a Skylark Dressed in Black"… (more)
LibraryThing member tldegray
An absolutely astounding poem. A must-read for any student or fan of poetry.