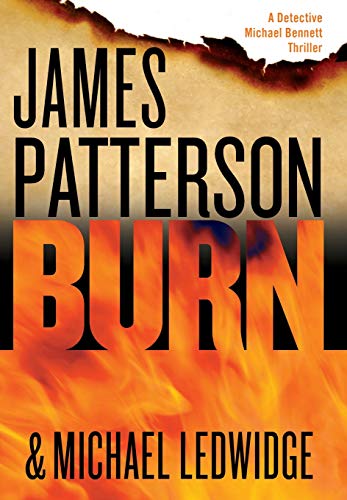 At last, Detective Michael Bennett and his family are coming home to New York City. Thanks to Bennett, the ruthless crime lord whose vengeful mission forced the Bennett family into hiding has been brought down for good. Back in the city that never sleeps, Bennett takes over a chaotic Outreach Squad in Harlem, where he receives an unusual call: a man claims to have seen a group of well-dressed men holding a bizarre party in a condemned building. With no clear crime or evidence, Bennett dismisses the report. But when a charred body is found in that very same building, he is forced to take the demented caller seriously--and is drawn into an underground criminal world of terrifying depravity.

LibraryThing member JeffV
A single father of a large group of adopted children, Michael Bennett certainly has his hands full. When his nanny is called to Ireland to care for her dying mother, Bennett must stave off an attempt to separate of his children from his custody while at the same time combating drug dealers and jewelry thieves. All in a day's work.… (more)
12 more
LibraryThing member susan0316
Burn is the 7th book in the Michael Bennett series. As with the other books in this series, there is a lot of police action where we see the mean and nasty side of Bennett but along with that we see him as a loving and caring father with his kids. Its a quick read - nothing too difficult to figure out because you know that he's one of the good guys and will always win in the end.… (more)
LibraryThing member nx74defiant
Another good James Patterson book. Cannibalism, murder, jewel thieves and a birth father all challenge Michael Bennett.

I read some of the earlier books, but skipped some in the series, so Michael having an on and off relationship with Mary Catherine really threw me.
LibraryThing member buffalogr
Burn is the seventh book in the Michael Bennett series by prolific American author, James Patterson. Cannibalism, murder, jewel thieves and a birth father all challenge Michael Bennett. Can he just get with Mary Catherine already ? Its a quick read - nothing too difficult to figure out because you know that he's one of the good guys and will always win in the end.… (more)
LibraryThing member Cheryl_Nolan
After months in witness protection, detective Michael Bennett returns to work and finds himself demoted by the vindictive actions of a rival for his passed wife's affection. Combined with a legal challenge to his rights as an adoptive father, a cadre of untouchably wealthy gourmet cannibals, an untraceable diamond heist team and a misfit new police team, Bennett's week starts off with a bang! At home, his love and concern for his adopted children and his fear of losing the family nanny, add to his troubles. Juggling home, work, love & politics, Bennett gambles his reputation and affections in a determined bid to do the right thing - even if it costs him all that he cherishes most. Fast paced & convoluted, this book is a page turner. Keep 'em coming!… (more)
LibraryThing member lewilliams
Detective Michael Bennett is back in NY. He's assigned to a new unit, the Outreach Squad in Harlem. Two separate cases come up. A woman is being stalked by her former boy friend while a report comes in of several well dressed me holding an un usual party in an abandoned building. The caller said he saw a naked woman being held over one mans head. This report is disregarded until a charred body is found in the very same building. Adding to this, Bennett is asked to return to Major Crimes to head up the investigation of a series of jewelry robberies. He's given a week to clear his case load from the Outreach Squad. Will he have enough time? Another page turning thriller from Patterson and Ledwidge.… (more)
LibraryThing member whybehave2002
I love Michael Bennett! I love his connection to his family and his genuine goodness. This story comes together and ends with a wonderful outcome.
LibraryThing member HenriMoreaux
I have been enjoying the Michael Bennett series thus far, however Burn just seemed a little stale. It's almost as if all the drama in I, Michael Bennett & Gone didn't happen and he's back to the same old same old detective of the prior books, there doesn't seem to be much in the way of substantive character development - then maybe that's not what you find in a James Patterson book anyway. Like a greasy burger you know it's not healthy but it's tasty for the most part.

This one starts off relatively slowly which is a bit of a disappointment considering the material that was available to work with - there's quite a few story lines in play, sadly of which most are just barely addressed or fall to the wayside. As for the major plot, once we finally get going it seems everything is just packed into the last part of the book with everything going on and nothing being resolved in detail. The main resolution is almost a mere footnote with no reasoning or background as to why things even turned out like that. Disappointing really.

Overall it was a pretty decent book for passing the time but wasn't up to the standards of the prior books in the series. I kind of wonder if Michael Ledwidge was unavailable and Patterson had to write most of this himself between the plethora of other commitments he has and that's why it's sub par.… (more)
LibraryThing member buffalogr
Burn is the seventh book in the Michael Bennett series by prolific American author, James Patterson. Cannibalism, murder, jewel thieves and a birth father all challenge Michael Bennett. Can he just get with Mary Catherine already ? Its a quick read - nothing too difficult to figure out because you know that he's one of the good guys and will always win in the end.… (more)
LibraryThing member nwieme
Disappointing.
Disjointed.
Waited a long time for Michael Bennett to return... boo.
LibraryThing member sami7
Why did I read this book? Standard & plain & linear. Good only to kill a few hours light reading.
LibraryThing member BingeReader87
this book was great. I love the Detective Bennett series.
LibraryThing member Carlathelibrarian
I do love the Michael Bennett series. His family, his grandfather, his nanny, his colleagues, it all makes for an interesting story. Sure, the premise may be somewhat unbelievable, but it is fiction for heavens sake. I love the short chapters and the cliffhangers. Just one more chapter, is what I say until it is suddenly 3:00 in the morning.

In this book, we see the Bennett family returning from California where they were in protective custody while Michael testified against a drug cartel. When he returns, he finds that one of his rivals has been promoted to his new boss and he is reassigned to a new project. He falls into a situation that involves one of his officers being killed, and then gets reassigned to the Major Crimes Division. How does he balance both divisions and his family when MaryCatherine goes back to Ireland to see her sick mother. An entertaining story that had me hooked from the first chapter.… (more)
Fewer