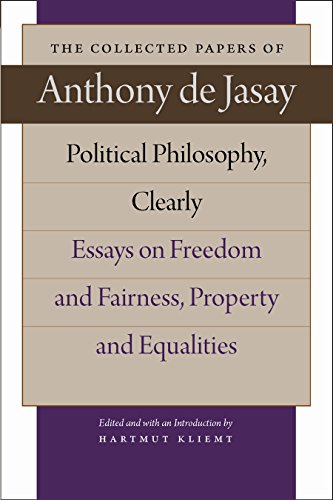 Anthony de Jasay, one of the most independent thinkers and influential libertarian political philosophers of our time, challenges the reigning paradigms justifying modern democratic government. The articles collected in Political Philosophy, Clearly delve deeply into the realm of political thought and philosophical criticism. A reader who is interested in a philosophical, yet clear, jargon-free account of such fundamental topics as the relationship between liberty and justice, the viability of limiting government, the role of property, and the possibilities of the private provision of public goods as well as the private enforcement of public rules will find reading this book rewarding. Most of the articles have been published before in a wide arrray of publications and are presented here for the first time in one volume. The discussions in this work exhibit the antistatist line of thought that Jasay consistently pursues in all his writings. For Jasay, the provision of collective goods, including the most central one of social order itself, is much less dependent on the application of fundamental coercive power by centralized authorities than generally assumed. This idea echoes arguments he develops in detail in Social Contract, Free Ride. Anthony de Jasay is an independent theorist living in France. Jasay "believes that philosophy should be mainly, if not exclusively, about clarifying conclusions that arise from the careless use of, or deliberate misuse of, language. There are echoes here of  . . . Wittgenstein's later philosophy.” His books, translated into a half dozen languages, include Justice and Its Surroundings and Social Contract, Free Ride.[source/credit line] I. M. D. Little in Ordered Anarchy, 2007Hartmut Kliemt is Professor of Philosophy and Economics at the Frankfurt School of Finance and Management.… (more)