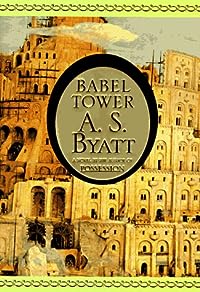 "In BABEL TOWER a cast of striking characters play out their personal dramas amid the clashing politics, passionate ideals and stirring languages of the early 1960s. Frederica (the heroine of VIRGIN IN THE GARDEN and STILL LIFE) now teaching English in an art college, is hiding herself and her son Leo from a violent husband; her urge towards freedom later leads to an angry, humiliating divorce case. Hers is not the only struggle- her friend Jude writes a novel, BABBELTOWER, which is tried for obscenity; her brother-in-law Daniel becomes involved in new movements for London's poor and distressed. Their crises mirror those of the age - abroad, this is the decade of the Berlin Wall, the Cuban Missile Crisis, the death of Kennedy; at home it is the era of the LADY CHATTERLEY case, of the Beatles, of Mods and Rockers, art school riots, the Profumo scandal. Moving and absorbing and full of comedy as well as strife, this superb novel brings our own recent past to vivid, and disturbing life."… (more)

The Spectator
It is both a novel of daunting virtuosity and a statement of grand moral and historical force.... a forceful confrontation with the sacred monsters of the 1960s counter-culture, Blake, Sade and Tolkien.... It is devastating, and unanswerable, because it never caricatures what it despises.

LibraryThing member thorold
The third in the Frederica saga: we're now in the mid-sixties. Frederica's impulsive marriage to Nigel Reiver has not worked out well, and she's trying to build a new life as a literary single parent in London, teaching adult education classes, reviewing, and reading manuscripts for a publisher. Alexander is on a government committee that's reporting on possible reforms of the teaching of English in schools, and Daniel is working for the Samaritans out of a switchboard in a church crypt.

Byatt comments ironically on the challenge-everything ethos of the Swinging Sixties by bringing in a full-scale book-within-a-book, Babbletower, a fantasy novel set in a libertine community where the do-what-thou-wilt ideals of Sade and Fourier are taken to their grotesque, horrific conclusion.

The book ends in two — parallel — extended set-piece court scenes, as Frederica's marriage is ended under the still unreformed divorce laws of the time in one court, and the author and publisher of Babbletower are tried for obscenity in another. We see how clumsy an instrument the legal mechanism for determining truth is when it has to deal with the emotional reality of a marriage or the literary reality of a novel. But we've already seen Frederica trying and failing to resolve her firsthand experience of sex and love with the supposedly authoritative — but mutually conflicting! — understanding she has learnt to look for from her reading of E M Forster and D H Lawrence. And we see that each of the so-called experts who give evidence for and against Babbletower has taken something quite different from the book from what we saw in it as readers, and different again from what the author thought he was putting in.

This is a very big, serious, complicated novel of ideas, but it's also a very funny book, full of mischievous caricatures of sixties types — two dreadful Liverpool Poets, Anthony Burgess (safely dead, and therefore playing himself, hilariously), Angus Wilson (a friend of the author's sister, and therefore disguised slightly), trendy clergymen and trendier psychoanalysts, a Bowie-esque pop star, various artists, a vicar's-wife novelist, etc. Best of all, of course, but a full-scale character rather than a mere caricature, is the author of Babbletower, Jude Mason, who shares a profession and some aspects of his personality with Quentin Crisp, but turns out to have a quite different background.

Oh yes, this is a Byatt novel, so it doesn't stop with one book-within-a-book: as well as Babbletower there is a Tolkienish quest-novel being written as a serial for the children by Frederica's childcare-partner, Agatha Mond, and there is Frederica's own work-in-progress, a collage and cut-up book she calls Laminations. Not to mention the usual literary fun and games with parodies of reviews, novel reports, student essays, and the documents of Alexander's committee. And — just in passing — a lot of serious discussion of the nature of language, the sources of morality, the way these things develop in children, cults, Happenings, charismatic Christianity, ritual, the sexuality of snails, the effects of pesticides, and much more.

A lot to take in, even at a second or third reading. But vastly entertaining.… (more)
7 more
LibraryThing member Niecierpek
It is a novel of ideas. It was a pleasure to read, and I could go back to the beginning right away, start reading again and still find interesting issues to think about. It reflects and discusses issues which were topical in the 60s, like women's rights, new trends in education, changes in what was designated obscene and sexual revolution. It is also paradise for those who like literary analysis, and discussions in philosophy and ethics. It is dense with ideas on and from Nietzsche, Blake, Fourier, D. H. Lawrence, Kafka, Forster and the Marquis de Sade. Blake is quoted and referred to most extensively, and I find it not accidental. The book itself is an extended Song of Innocence into Song of Experience on many levels.
It's about the "innocence and experience" of Frederica, the main character, who finds out what is important in her life, and of a group of people who isolate themselves to practice sexual and social freedom. The idea of the society of `freedom' is tackled by a book within the book: _Babbletower_- a utopian/dystopian tale in which a group of nobles are trying to build a utopian society based on the premise that everyone should do what brings him pleasure. But, what if somebody finds cruelty bringing him pleasure?

The author of the book within the book is put on trial for obscenity. At the same time the main character of the novel, Frederica, finds herself in divorce and custody proceedings. Both trials borrow extensively from the real trials that took place in England at the time.… (more)
LibraryThing member heidilove
Amazing follow up to possession, more a parallel novel than a sequel.
LibraryThing member karl.steel
You get:

* Charles Fourier vs. Sade (in the novel, babbletower, within a novel)
* An affectionate send-up of the medievalism and attractions to Apocalyptic Blake in 60s counterculture (and a perhaps less affectionate send up of the countercultural psychology of Laing and Marcuse)
* A wondering exploration of the 60s developments in pedagogy
* a harrowing feminist account of domestic violence
* TWO courtroom dramas (first divorce, and then an obscenity charge, during which Anthony Burgess (!) appears)
* the birth of environmentalism

Merits repeated rereadings.… (more)
LibraryThing member Arctic-Stranger
An amazing "book within a book" type book. After Possession I wondered where Byatt could go. Here she picks up the thread from Unicorn in the Garden and other earlier works, but brings them to fruitation.
LibraryThing member nwhyte
Depressing book. Not recommended.
LibraryThing member jonfaith
One of my friends, who maintains amazing literary tastes, told me two years ago that Babel Tower was unreadable. I now agree. The familial and educational contexts of the first two novels are gone in this one. What is left is simply ugly. Byatt hopes to make sense of the 60s with a pastiche method and pair of court cases. I deign she fails.… (more)
LibraryThing member dartmoor
An amazing novel- I cannot praise it too highly. This is in many ways a serious read, there is so much going on, so many allusions, so much intertextuality- yet it all seems to flow effortlessly. A novel to trurn to again and again :)
Fewer