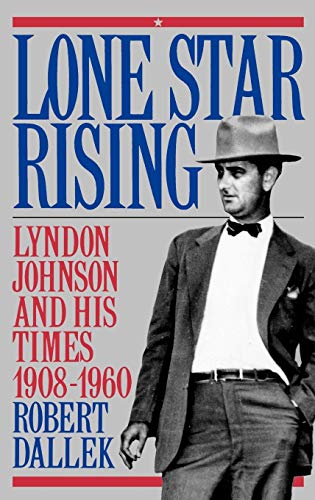 Lyndon Johnson and His Times

Like other great figures of 20th-century American politics, Lyndon Johnson defies easy understanding. An unrivaled master of vote swapping, back room deals, and election-day skulduggery, he was nevertheless an outspoken New Dealer with a genuine commitment to the poor and the underprivileged. With aides and colleagues he could be overbearing, crude, and vindictive, but at other times shy, sophisticated, and magnanimous. Perhaps columnist Russell Baker said it best: Johnson "was a character out of a Russian novel...a storm of warring human instincts: sinner and saint, buffoon and statesman, cynic and sentimentalist." But Johnson was also a representative figure. His career speaks volumes about American politics, foreign policy, and business in the forty years after 1930. As Charles de Gaulle said when he came to JFK's funeral: Kennedy was America's mask, but this man Johnson is the country's real face. In Lone Star Rising, Robert Dallek, winner of the prestigious Bancroft Prize for his study of Franklin D. Roosevelt, now turns to this fascinating "sinner and saint" to offer a brilliant, definitive portrait of a great American politician. Based on seven years of research in over 450 manuscript collections and oral histories, as well as numerous personal interviews, this first book in a two-volume biography follows Johnson's life from his childhood on the banks of the Pedernales to his election as vice-president under Kennedy. We see Johnson, the twenty-three-year-old aide to a pampered millionaire Representative, become a de facto Congressman, and at age twenty-eight the country's best state director of the National Youth Administration. We see Johnson, the "human dynamo," first in the House and then in the Senate, whirl his way through sixteen- and eighteen-hour days, talking, urging, demanding, reaching for influence and power, in an uncommonly successful congressional career. Dallek pays full due to Johnson's failings--his obsession with being top dog, his willingness to cut corners, and worse, to get there-- but he also illuminates Johnson's sheer brilliance as a politician, the high regard in which key members of the New Deal, including FDR, held him, and his genuine concern for minorities and the downtrodden. No president in American history is currently less admired than Lyndon Johnson. Bitter memories of Vietnam have sent Johnson's reputation into free fall, and recent biographies have painted him as a scoundrel who did more harm than good. Lone Star Rising attempts to strike a balance. It does not neglect the tawdry side of Johnson's political career, including much that is revealed for the first time. But it also reminds us that Lyndon Johnson was a man of exceptional vision, who from early in his career worked to bring the South into the mainstream of American economic and political life, to give the disadvantaged a decent chance, and to end racial segregation for the well-being of the nation.… (more)