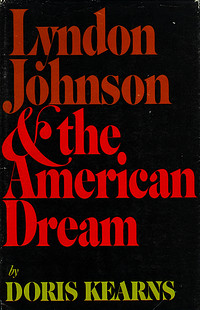 Lyndon Johnson and the American Dream

An engrossing biography of President Lyndon Johnson from the Pulitzer Prize-winning author ofTeam of Rivals Hailed by theNew York Timesas "the most penetrating, fascinating political biography I have ever read," Doris Kearns Goodwin's extraordinary and insightful book draws from meticulous research in addition to the author's time spent working at the White House from 1967 to 1969. After Lyndon Johnson's term ended, Goodwin remained his confidante and assisted in the preparation of his memoir. InLyndon Johnson and the American Dream, she traces the 36th president's life from childhood to his early days in politics, and from his leadership of the Senate to his presidency, analyzing his dramatic years in the White House, including both his historic domestic triumphs and his failures in Vietnam. Drawn from personal anecdotes and candid conversations with Johnson, Goodwin paints a rich and complicated portrait of one of our nation's most compelling politicians.… (more)

LibraryThing member queencersei
This book covers LBJ, from his birth in a small Texas town, rise through the Senate, becoming President and eventual retreat from public life during Vietnam. The author explorers Johnson's early relationships, paticularly with his parents and beloved grandfather and how these people shaped the driven man that he became. At his best as a behind the scene's mover in the Senate, driven by his childhood teachings to use aquired power for the benefit of others and the spiral of events that led him to disaster in Vietnam. Johnson is not the hero or the villian of the piece. A complex man, trying to do good during the most trying of times, Lyndon was haunted by his decisions and undone by a war he felt he could not avoid and a population that he thought he served faithfully, only to be scorned by them.… (more)
2 more
LibraryThing member SCRH
An important work by an excellent author.
LibraryThing member scottjpearson
Former US President Lyndon Johnson is one of the more difficult to understand presidents. He reached the heights of politics through an assassination. He changed America permanently through the Civil Rights Acts of 1964-5. Pragmatically, he attempted to build a nation based on equal opportunity through the Great Society. He had an unparalleled genius for administrative leadership in the Senate and Oval Office. Yet he led the nation down a horrific course in Vietnam and seemed to disregard basic facts and popular sentiment – to his and the nation’s detriment.

This book put Kearns Goodwin on the map as an articulate biographer and won her a Pulitzer Prize. Readers are often struck by the psychoanalytic parts of this book. Much of that stems from her unfettered access to Johnson after his presidency. She wanted to understand the man, not just the historical leader, and the main lens she had to offer was an understanding of his childhood. Whether or not the reader appreciates this is out of her control. The veracity of this understanding of LBJ seems to have stood the test of time.

Now a national gem, Kearns Goodwin is at her best in this book when describing how Johnson handled the civil rights of African Americans. She does not portray him as a white savior but as someone reasonably reacting to the events of his time. She also explains the backstory to the escalation in Vietnam. The events of Vietnam take a step to the rear as she explains how this tragedy unfolded in this great man’s mind. She clearly respects Johnson yet struggles openly to understand his tragic flaws.

Although written 40-50 years before this review, this book maintains much relevance to American readers. As the baby-boom generation ages, its psychological deficits – moored in no small part in the experiences of Vietnam – continue to be displayed on newspapers’ front pages. These features were defined with the events of the JFK assassination, the presidency of Johnson, and the subsequent presidency of Nixon. Unfortunately, America still seems mired in the shortcomings of this era, now displayed in ideological partisanship. Perhaps a better understanding through Kearns Goodwin’s original epic might serve us well.… (more)
Fewer