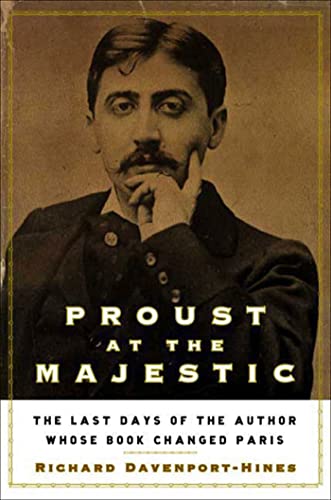 Proust at the Majestic : the last days of the author whose book changed Paris

New York : Bloomsbury : Distributed to the trade by Holtzbrinck Publishers, 2006.

One May night in 1922, in a grand hotel in Paris, five of the greatest artists of the 20th century sat down to supper. It would be the only time that Joyce and Proust, Picasso, Diaghilev and Stravinsky were in a room together. Each of these exponents of early twentieth-century modernism was at the peak of his creative powers, and of all of them, Proust was enjoying the most spectacular success. Yet within six months he would be dead. A Night at the Majestic evokes the luxury and glamour of early-twentieth century Paris, the intellectual achievement of the modernist movement and the gossip, intrigue and scandal of aristocratic France. Above all, Richard Davenport-Hines gives us a compelling portrait of one writer's bravery and devotion to his masterwork - and of the people and the city which gave it shape.… (more)

LibraryThing member vguy
Thin. Gossipy. Revelling in a thousand names. Trivia about famous artists or titled rich folk. Only point of interest was comparison of Proust & Joyce: they were rude to each other ( which i already knew) and Proust sold well while Joyce did not. My distaste exacerbated by the audio reader (on Clipper) who put on funny voices for those funny foreigners (so Proust sounded like a character from ‘allo ‘allo) but couldn’t pronounce French ( so Prince sounded like Prance, rue like roue, and avant-garde had a hard T). Quel horreur!… (more)

Marcel Proust by Mary Ann Caws
Proust Among the Stars by Malcolm Bowie
Marcel Proust by Jean-Yves Tadié
Proust's overcoat by Lorenza Foschini
Marcel Proust by Edmund White
5 more
Proust: Portrait of a Genius by Andre Maurois (1984-09-03)
A Chance Meeting: Intertwined Lives of American Writers and Artists by Rachel Cohen
How Proust can change your life by Alain : de Botton
Axel's castle : a study in the imaginative literature of 1870-1930 by Edmund Wilson
Edmund Wilson : a life in literature by Lewis M. Dabney
Fewer