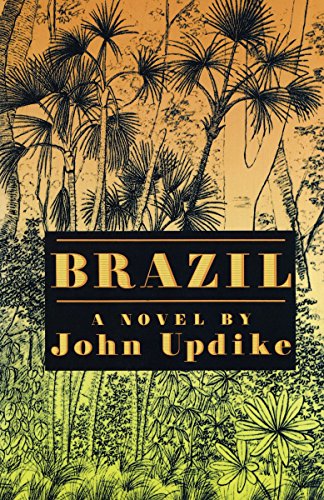 John Updike's sixteenth novel takes place in a stylized Brazil where almost anything is possible, if you are young and in love. Tristao Raposo, a nineteen-year-old black child of the Rio slums, and Isabel Leme, an eighteen-year-old upper-class white girl, meet on Copacabana Beach; their flight into marriage takes them to the farthest reaches of Brazil's wild west. Privation, violence, captivity, and reversals of fortune afflict them; his mother curses them, her father harries them with hirelings, and neither lover is absolutely faithful. Yet Tristao and Isabel hold to the faith that each is the other's fate for life, as they pass - in Shakespeare's phrase - "through nature to eternity." Spanning twenty-two years, from the mid-Sixties to the late Eighties, Brazil surprises and embraces the reader with its celebration of passion, loyalty, and New World innocence.… (more)

LibraryThing member heina
I read it since it was a retelling of the Tristan and Isolde legend. I have not read any other Updike novels. This one is interesting and bizarre, and utilizes magic realism fairly successfully. Of course it is literary and far-fetched --- it's a magical realism-infused retelling of an old legend.
7 more
LibraryThing member name99
I'd not read any Upike before this so I thought I'd give him a try.
I found the story interesting to the extent that it gave me a feel for the size and sweep of Brazil, and the extent to which it is ignored in the west.
But beyond that it was rather too much of a literary story, my same complaint as with The Dying Animal, so I don't think I'll be reading much more Updike.… (more)
LibraryThing member honeyspur
This was a Bookcrossing pick-up.

Fiction love story between two Brazilians - one from money and status, the other from the working class, living at the poverty level. Together, they roam the country in building their life. It shows the surprising diversity of land, person and culture, in Brazil.
This story has some level of tragedy, yet my impression was it was not a sad story overall. It is about love and companionship.… (more)
LibraryThing member beaurichly
One of Updike's lesser known works. Echos of Gabriel Garcia Marquez and Mario Vargas Llosa.
LibraryThing member dbsovereign
This may not be his best, but I like it the best of Updike's novels. A story of survival (on many levels), it shines as a novel about falling in lust and how things can go rather downhill from there...
LibraryThing member ivanfranko
The Tristan and Isolde story re-located to Brazil of the seventies and eighties of the Twentieth Century.
LibraryThing member Olivermagnus
This was a very bizarre story that features Updike's version of the legend of Tristan and Iseult, prototype victims of doomed love. Nineteen year old Tristao, a black teenager from the Brazilian slums, falls for Isabel, a rich young daughter of the elite, one afternoon on Rio's Copacabana beach. Isabel falls back, takes him home and gives her virginity to him. They both discover a love to end all loves and decide to run away together. Her father's men pursue them to Sao Paulo where Isabel is forced away, only the first of many partings they will have over the next thirty years.

Updike sets his amorous pair against a squalid backdrop of crooks, mercenaries, whores, pimps and other greedy and grasping predators. His descriptions of Tristan's penis (“his cashew become a banana, and then a rippled yam”) gave me some real laugh out loud moments and a vow to avoid sweet potatoes in the future. Who doesn't love some good vegetable sexual symbolism?

Updike endeavors for a magical realist effect in an overly vivid dialogue and plotting. The characters had little personality or development. Tristao even wears the same swimming trunks and uses the same razor blades at the end of the story as he did at the start. There are plenty of gratuitous sex scenes that are supposed to demonstrate how much they love each other but just seemed too comical for me to take seriously. He did describe a wide ranging outlook of both the city culture and the jungle culture. I felt like I did get some measure of what Brazil is all about but ended the book feeling that there is more to Brazil than just a mediocre travelogue and non-stop degrading sex.

1159… (more)
LibraryThing member William345
I couldn't start this. I think it was all the schtuping. In his new novel (The Pregnant Widow) Martin Amis says of fornication that it is both indescribable and it populates the planet. Read into that the criticism that attempts to describe sex on the page usually fail. One wishes Updike, whom I otherwise love, had in at least this instance felt the same way.… (more)
Fewer