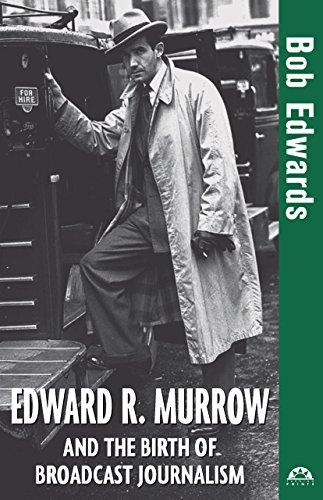 Edward R. Murrow and the birth of broadcast journalism

?Most Americans living today never heard Ed Murrow in a live broadcast. This book is for them. I want them to know that broadcast journalism was established by someone with the highest standards. Tabloid crime stories, so much a part of the lust for ratings by today's news broadcasters, held no interest for Murrow. He did like Hollywood celebrities, but interviewed them for his entertainment programs; they had no place on his news programs. My book is focused on this life in journalism. I offer it in the hope that more people in and out to the news business will get to know Ed Murrow. Perhaps in time the descent from Murrow's principles can be reversed.? -Bob EdwardsLong before the era of the news anchor, the pundit, and the mini-cam, one man blazed a trail that thousands would follow. Edwards brings to life the great stories Murrow covered and brought into American living rooms for the first time - the rooftop reports of the London Blitz, bombing raids over Berlin, and the 1954 broadcast that helped bring down Senator Joe McCarthy - as well as the ups and downs of his career at CBS. Edwards reveals how Murrow dramatically impacted public opinion and how the high standards he lived by influenced an entire generation of broadcasters.… (more)

LibraryThing member SLuce
Went to the WXXI interview with Bob Edwards and got the book signed. Enjoyed the book. Read this before I saw the movie Good Night and Good Luck.
2 more
LibraryThing member bherner
Read this book after seeing "Good Night, and Good Luck". Well written, but pretty thin.
LibraryThing member Murphy-Jacobs
This is a deliberately short book addressing Murrow's influence on broadcast news and skimming over the details of his career and life, but it's a good, solid introduction to Murrow. It includes the text from some of his most famous broadcasts and speeches.

However, the most surprising, interesting, and gripping part of the book was Bob Edward's afterword. This scorching assessment of modern broadcast journalism and how Murrow would never have risen to the level of fame and influence he knew in the 1940s and 50s is the speech of an angry man, I think, one who is in intense agreement with Murrow's vision of television and radio's responsibility and power and its failure to use that power in upholding the responsibility.… (more)
Fewer

World War II on the air : Edward R. Murrow and the broadcasts that riveted a nation by Mark Bernstein
Scotty : James B. Reston and the rise and fall of American journalism by John F. Stacks
The Chief: The Life of William Randolph Hearst by David Nasaw
Cronkite by Douglas Brinkley
Staying tuned : a life in journalism by Daniel Schorr
2 more
Wayward reporter : the life of A. J. Liebling by Raymond A. Sokolov
In all his glory : the life of William S. Paley, the legendary tycoon and his brilliant circle by Sally Bedell Smith
Fewer