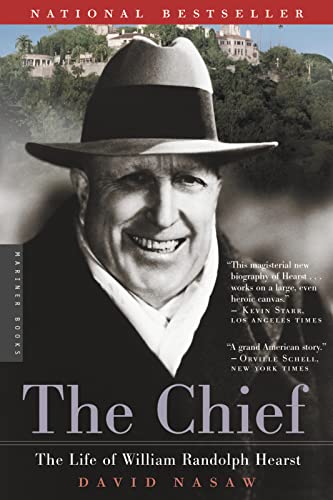 The Chief: The Life of William Randolph Hearst

David Nasaw's magnificent, definitive biography of William Randolph Hearst is based on newly released private and business papers and interviews. For the first time, documentation of Hearst's interactions with Hitler, Mussolini, Churchill, and every American president from Grover Cleveland to Franklin Roosevelt, as well as with movie giants Louis B. Mayer, Jack Warner, and Irving Thalberg, completes the picture of this colossal American. Hearst, known to his staff as the Chief, was a man of prodigious appetites. By the 1930s, he controlled the largest publishing empire in the country, including twenty-eight newspapers, the Cosmopolitan Picture Studio, radio stations, and thirteen magazines. As the first practitioner of what is now known as synergy, Hearst used his media stronghold to achieve political power unprecedented in the industry. Americans followed his metamorphosis from populist to fierce opponent of Roosevelt and the New Deal, from citizen to congressman, and we are still fascinated today by the man characterized in the film classic CITIZEN KANE. In Nasaw's portrait, questions about Hearst's relationships are addressed, including those about his mistress in his Harvard days, who lived with him for ten years; his legal wife, Millicent, a former showgirl and the mother of his five sons; and Marion Davies, his companion until death. Recently discovered correspondence with the architect of Hearst's world-famous estate, San Simeon, is augmented by taped interviews with the people who worked there and witnessed Hearst's extravagant entertaining, shedding light on the private life of a very public man.… (more)

The New York Times Book Review
Nasaw... is a meticulous researcher and a cool analyst. His Hearst is altogether a larger, more sympathetic figure than the vindictive, humorless crypto-fascist seen by the left. He does not exculpate Hearst, the propagandist who signed up Hitler and Mussolini and flayed Franklin D. Roosevelt as a Communist dupe. He explains him and makes him human.
— 1 more
The New York Times
Mr. Nasaw has given his biography an immediacy that almost makes the reader forget that the author himself was not there as the story unfolded.

LibraryThing member Schmerguls
Because on 23 Mar 1986 I read W. A. Swanberg's biography of Hearst when this biography came out in 2000 I figured I need not read it. But recently as I thought about Hearst's political effort culminating in seeking the Democratic nomination for President in 1904, I thought I would find this book of interest--and I was right. Some of my reaction was the same as when I read Swanberg's book--revulsion at his hopelessly extravagant spending and rejoicing at his near bankruptcy in 1937--but it was good to read the book and while reading about his acquisitions of art and such was not interest-holding much of the account as to his political activity and how he dictatorily ran his publishing empire was of high interest. And there were times when I laughed out loud, such as when I read that he returned to the USA from abroad on Nov. 2, 1936, and predicted publicly that Landon would be elected President. I was appalled at his living openly with his mistress, while holding himself out as a defender of morality. One can be glad that no other publisher was ever so dominant and it was indeed satisfying to read about his near financial collapse in 1937. The book was awarded a Bancroft Prize in 2000 and is the 36th such winner I have read. But since two Bancroft prizes have been awarded each year since 1948 one can see that there are lots of such winners which I have not (yet) read.… (more)
1 more
LibraryThing member EricCostello
On balance, just about the best and most balanced biography of Hearst of the many that are out there. Nasaw has the advantage of time, which has allowed the animosity directed against Hearst in his lifetime to die down, and offer a somewhat more objective view of the subject. I prefer this to Swanberg's biography. This particular biography has been liberally cribbed for other bios, as well.… (more)
Fewer

The Chief: The Life of William Randolph Hearst by David Nasaw (Hardcover)

Titan : the life of John D. Rockefeller Sr. by Ron Chernow
Pulitzer : a life in politics, print, and power by James McGrath Morris
Andrew Carnegie by David Nasaw
Means of ascent by Robert A. Caro
Lindbergh by A. Scott Berg
4 more
In all his glory : the life of William S. Paley, the legendary tycoon and his brilliant circle by Sally Bedell Smith
The years of Lyndon Johnson. [Volume 3], Master of the senate by Robert A. Caro
The Warburgs: the twentieth-century odyssey of a remarkable Jewish family by Ron Chernow
Genius in disguise : Harold Ross of the New Yorker by Thomas Kunkel
Fewer