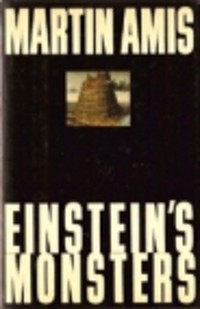 An ex-circus strongman and Notting Hill rough-justice artist, meets his own personal holocaust and 'Einsteinian' destiny in 'Bujak and the strong force or God's Dice'. Maximum boredom and minimum love-making are advised in the 2020 (AD) epidemic of 'The Time Disease', while a new strain of schizophrenia overwhelms the young son of a 'father of the nuclear age' in 'Insight at Flame Lake'. The stories in this collection were written over a period of two years, and only when they were complete did the author recognise the extent to which they revealed a deep preoccupation. 'In this debate, in this crap game', writes Martin Amis, 'I do want to get my chip on the table. ' This he does, not only in the fictional worlds to which he leads us, but also in an enlightening introductory essay which can leave no one ambivalent to their own opinion. 'EINSTEINS MONSTERS refers to nuclear weapons but also to ourselves, 'writes Amis. 'We are Einstein's monsters- not fully human, not for now. '… (more)

New Musical Express
The stories swirl with fallout and the stress of thinking you might be blown up any minute. People's social lives are like missile crises or else the mushroom-cloud is already in their heads — they have personal apocalypses, they are permanently fixed in The Day After.

LibraryThing member LynnB
Martin Amis has written a collection of five stories about lving with the threat of, or after, a nuclear war.

In two of the stories, the existence of nuclear weapons is a backdrop for the anxieties and behaviour of characters. These were my favourites, with a strength of language and imagery that
Show More
literally made me pause and reflect mid-paragraph at times.

The other three stories could more easily fit the science-fiction genre since they take place after nuclear war has destroyed the world as we know it. Even in these, Mr. Amis's focus is on people: these aren't stories about war and technology, but about what they do to humanity.
Show Less
1 more
LibraryThing member soylentgreen23
A slightly hit-and-miss collection of stories - and an excellent opening essay - on the nuclear reality of the 1980s.
Fewer