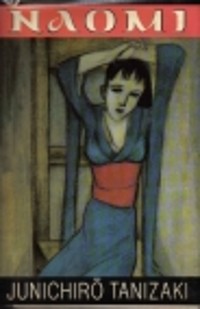 Junichiro Tanizaki's Naomi is both a hilarious story of one man's obsession and a brilliant reckoning of a nation's cultural confusion. nbsp; When twenty-eight-year-old Joji first lays eyes upon the teenage waitress Naomi, he is instantly smitten by her exotic, almost Western appearance. Determined to transform her into the perfect wife and to whisk her away from the seamy underbelly of post-World War I Tokyo, Joji adopts and ultimately marries Naomi, paying for English and music lessons that promise to mold her into his ideal companion. But as she grows older, Joji discovers that Naomi is far from the naïve girl of his fantasies. And, in Tanizaki's masterpiece of lurid obsession, passion quickly descends into comically helpless masochism.… (more)

LibraryThing member kidzdoc
Naomi was the first major work by Jun'ichirō Tanizaki (1886-1965), who was one of the leading 20th century Japanese novelists. It was written in the aftermath of the 1923 Great Kantō Earthquake that decimated Tokyo and Yokohama, where Tanizaki was living, an event which marked a turning point in
Show More
his life and writing. Before the earthquake Tanizaki was enamored of Western culture, with its modernity and freedom of expression; in its aftermath he began to appreciate the traditional Japanese customs and values of his childhood, which continued throughout the rest of his life.

Naomi, also known as "A Fool's Love", was initially published in serial form in 1924, and was highly controversial at that time, due to its depiction of Naomi's promiscuity and nontraditional behaviors. As a result, it was not published as a novel until the end of World War II. It has remained in print since its release in 1947, and it remains one of the best selling Japanese novels of the 20th century, both within and outside of the country.

The subject of the novel is a 15 year old girl from a dodgy family who works as a café hostess in 1920s Tokyo. One of her customers is the 28 year old Joji, the narrator of the story, an electrical engineer who describes himself as a country bumpkin, awkward but attractive to most women. Joji respects the traditions of Japanese culture, but dislikes the intricacies of courtship and marriage. He wishes to live with a woman who is beautiful by Western standards and modern, one who can speak English fluently and has an intelligent, analytical mind.

Joji is enraptured by Naomi, with her Western name, Eurasian features and free spirit, and she agrees to live with him as his "maid", while he pays for her classes in English and Western music. He seeks to mold her in the fashion of his ideal wife, but Naomi becomes an indifferent pupil, as she develops a taste for fine clothes, restaurants and the company of young men. The two fall in love, and "marry" the following year. However, as Naomi flowers into womanhood, she becomes more manipulative and brazen, as she realizes the power she holds over Joji and other men who desire her. Joji's life spirals out of control, as he spends every spare dollar meeting her increasing demands, and takes more time off from work to follow the movements of his promiscuous wife. Eventually he throws her out, but he quickly realizes that he cannot live without her.

Naomi is an important novel about the conflict between traditional Japanese and Western values in 1920s Japan, as it reflects the changes in Japanese society before World War II and in the author. Tanizaki is believed to have based the subject of his novel on his Westernized sister-in-law, with whom he was enamored; he found his first wife to be too traditional and restrained. It is a straightforward and enjoyable read, although this reader frequently wished to give Joji a spine transplant.
Show Less
9 more
LibraryThing member jburlinson
A kind of Japanese Sister Carrie, this tale of sex addiction would, I believe, have been more compelling if there hadn’t been such a pronounced parallel between the progressive degradation of the narrator (who is transformed from the stuffed shirt “Joji” to the contemptible “George”) and
Show More
the degeneration, culturally, aesthetically and morally, of Japan, as it, putatively, became more “westernized” in the period after WWI. But Tanizaki does understand perversity and he can communicate fetishism with conviction. If the word “nape” gives you a tingle, prepare yourself!
Show Less
LibraryThing member satyreyes
This book is one of the elite few on my Shelf Of Pain, which contains the books that sucker-punch me, that hurt, that make me cry, and make me like it. Tanizaki is a frigging genius, and I need to read more of his books, and maybe check out some Natsume while I'm at it. The central questions -- how
Show More
powerful is female allure? what does it mean to be enslaved? -- are questions with a lot of resonance for me.
Show Less
LibraryThing member poetontheone
Being his first novel, Tanizaki's Naomi is a surprisingly masterful tale of a man obsessed and manipulated, a tale of imminent decline. The protagonist Joji takes fiteen year old Naomi under his wing, and the two soon strike up a passionate love affair, with Joji at the ready to cater to Naomi's
Show More
every desire. We see that most of the love, with any authenticity, is one sided. As the story advances, Naomi becomes less childish and more beguiling, more bewitching in the best and worst ways. Tanizaki uses her deceitful character as the perfect springboard to create a thick plot of growing, but subtle mystery entwined in powerfully lyrical prose. Most of the time, pitiful Joji can't even tell how badly he is being fooled. Even if he knows he is deceived, he thinks he might gain the upper hand and assert his dominance over Naomi. Tanizaki, with such grand skill as a storyteller, fools us into thinking the same. The character of Naomi, for all of her charms, is more reminiscent of Sacher-Masoch's Wanda than Nabokov's Lolita. Joji, at the end, is a castrated dog, and we as readers come to realize the power that deception wields within the realms of lust, love, and passion.
Show Less
LibraryThing member Niecierpek
Perils of westernization and one man's obsession in the 1920s Tokyo, with a humorous and mildly contrary twist. Somewhat akin to Lolita. I found the preface by the translator to my edition almost as interesting as the book itself.
LibraryThing member fairbrook
A nice read, though i kept wincing at how naive the main character was....time after time...

this is a story about a bored japanese businessman who struck up a fancy with an innocent (haahaaaaa) japanese cafe girl....became obsessed with her and put on her his obsession with the "western ideal"
Show More
which eventually became his ruin....she would drift from him...but he never seemed to waver from her more than just a cursory hurt......his obsessions were pitiful.....he would find out her infidelities then demand that she leave then pine for her.......

i will not give away the end.....
Show Less
LibraryThing member Ghost_Boy
Nothing spectacular, but I enjoyed the story. I really liked the writing, but I didn't like the characters. They were complex, but I don't think as a reader I was suppose to like them. I would say this was almost like the Japanese version of Lolita, but less disturbing. At times this reminded me of
Show More
Osamu Tezuka's Ayako as well. A lot of this book as to to do with Westernization in Japan as well. I don't know much about Junichiro Tanizaki to talk more about the book, but found out about him watching interviews with Henry Miller, figured if I'd check out this guy and I'm glad I discovered someone new for myself.
Show Less
LibraryThing member cameling
Joji Kawai, a young salaryman nicknamed the 'gentleman' by his colleagues becomes interested in Naomi, an exotic looking teenage hostess, and thinks to rescue her from a seedy life. He offers to support her if she will come and live with him, doing the housework and cooking. He pays for her English
Show More
and music lessons and plays silly games with her at home. After a time, he proposes marriage and she accepts.

But Naomi isn't all that she appears to be and gradually Joji realizes the depth of her manipulation but is ensnared by his own obsession.
Show Less
LibraryThing member hemlokgang
In many ways this novel was painful to read. A love story, the love evolves from a pure, idealized love to a masochistic, obsessional love. Each stage is horrifying on some level. The man is willing to be completely dominated by a manipulative, dishonest, cruel woman. Normally, I may have set this
Show More
book aside, but as was the case with "Lolita" by Nabokov, the prose is exquisite, and it drew me on to end. Perhaps Tanizaki appealed to some thread of masochism which exists in all who love.
Show Less
LibraryThing member EpicTale
"Naomi" reminded me that I don't enjoy stories in which all the characters are shmucks. Narrator Joji, a serious-seeming engineer salaryman in his early 30s, assumes personal responsibility for raising a 15-yo adolescent girl as if she were a puppy or houseplant. Her guardians lazily accede, happy
Show More
to be relieved of the burden of feeding another mouth. Guess what? The house plant not only blossoms into a sexy young and desirable woman, but also shows herself to be selfish, lazy, and not so bright. So what's a guy to do? Nothing, in Joji's case, because he is completely smitten with Naomi and persists in his original judgment that she lacks free will and can be tamed according to his vision and specifications.

The story also contains lots of east vs, west, old, vs. new dynamics of emerging changes to Japanese society and culture, which my review admittedly ignores. Separate and apart from the historical context, however, "Naomi" reads more like a comedy than a tragedy. We witness Naomi's natural growth (but with no self-awareness) into a fun-loving adult who offers little added value beyond her proven (albeit difficult to fathom) competence in bringing men to their knees. Joji, on the other hand, naturally smart though he is, demonstrates a pathetic absence of personal growth and discernment based on massively faulty premises and his absymal inability for critical thinking and self-reflection.

"Naomi" was a vivid portrayal of what and how not to be. It reminded me of the movie "Leaving Las Vegas".
Show Less
Fewer

Kokoro by Natsume Soseki
Masks by Fumiko Enchi
Beauty and Sadness by Yasunari Kawabata
The tale of genji by Murasaki Shikibu,
Fires on the Plain by Shohei Ooka
3 more
In praise of shadows by Jun'ichiro Tanizaki
Botchan by Sōseki Natsume
Nip the Buds, Shoot the Kids by Kenzaburo Oe
Fewer