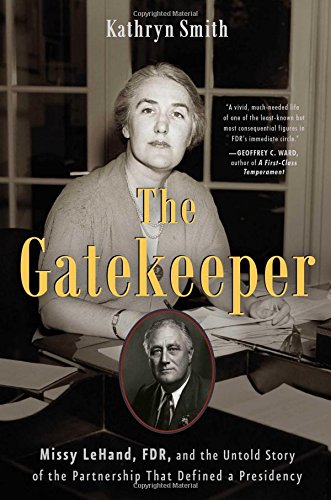 The gatekeeper : Missy LeHand, FDR, and the untold story of the partnership that defined a presidency

"The first biography of arguably the most influential member of Franklin Delano Roosevelt's administration, Marguerite 'Missy' LeHand, FDR's de facto chief of staff, who has been misrepresented, mischaracterized, and overlooked throughout history...until now"-- "Journalist Smith (A Necessary War) grants readers an unusual insider's view of F.D.R.'s political career by profiling his longtime private secretary. Marguerite 'Missy' LeHand, a young woman with a modest background, an agile intellect, a pleasant personality, and remarkable stenographer's skills, began working for F.D.R. in 1920, when he ran for vice president. Smith writes particularly well about F.D.R.'s struggle to bounce back from being struck with polio in 1921, explaining the disease and the origins of the Warm Springs, Ga., health spa that he frequented. LeHand was F.D.R.'s most constant companion during the 1920s, sparking rumors--convincingly dismissed by Smith--that they were lovers. The real core of the story is the White House years from 1933 until 1942, when LeHand helped create the vast New Deal bureaucracy. She decided who would see the president and when; today her title would be chief of staff. LeHand worked long hours but took time to enjoy the perks of the job, including a barrage of social invitations and fawning press coverage. Though Smith overstates her claim about LeHand's importance to F.D.R. and his work as president, she delivers a fascinating account of one woman's involvement in an important administration"--Publishersweekly.com.… (more)

LibraryThing member BookConcierge
From the book jacket: Marguerite “Missy” LeHand was the private secretary and right-hand woman of Franklin Delano Roosevelt for more than twenty years, serving as de facto chief of staff in the White House – a position never held by a woman before or since. From her perch at Roosevelt’s side, she offered him counsel on Supreme Court and cabinet appointments – and on events as momentous as the unfolding war in Europe (and as minor as whom to invite for dinner).

My reactions
I had never heard of Miss LeHand, and yet she was written about during her tenure as Roosevelt’s private secretary, with a Time magazine cover in 1934 that featured the four people who formed FDR’s secretariat, and several profile articles in Life and Look magazines, as well as regular mention in newspapers. So how is it that she has slipped out of our collective memories?

Perhaps the answer is that, until this work, there has never been a biography of this extraordinary woman. Smith did extensive research and she includes detailed notes and a bibliography at the end of the main biography. Her interest in Missy and her access to letters, journals and records, helped Smith craft a book that is interesting, balanced and fascinating. There is controversy, to be sure, about LeHand’s actual role in FDR’s life, with some people claiming that she was the President’s mistress, while others refute that. Smith’s research leads her to the conclusion that Missy was not a love interest but a close and reliable confidant, a person the Roosevelts (both Franklin and Eleanor) trusted and depended upon. The high regard in which Missy LeHand was held is evidenced by the fact that the Roosevelts paid for all her medical expenses after her major stroke, and the family continues to pay for the maintenance of her gravesite.

I found the Afterword and Acknowledgements section almost as fascinating as the main biography. In it Smith relates how she came across a reference to Missy LeHand which piqued her interest. When she began searching for a biography to read, she discovered the lack of one. The rest, as they say, is history.… (more)

The train to Crystal City : FDR's secret prisoner exchange program and America's only family internment camp during World War II by Jan Jarboe Russell
Rightful heritage : Franklin D. Roosevelt and the land of America by Douglas Brinkley
Franklin and Lucy : President Roosevelt, Mrs. Rutherfurd, and the other remarkable women in his life by Joseph E. Persico
Traitor to His Class : The Privileged Life and Radical Presidency of Franklin Delano Roosevelt by H. W. Brands
Roosevelt's centurions : FDR and the commanders he led to victory in World War II by Joseph E. Persico
2 more
Clementine : the life of Mrs. Winston Churchill by Sonia Purnell
Eleanor and Hick : the love affair that shaped a First Lady by Susan Quinn
Fewer