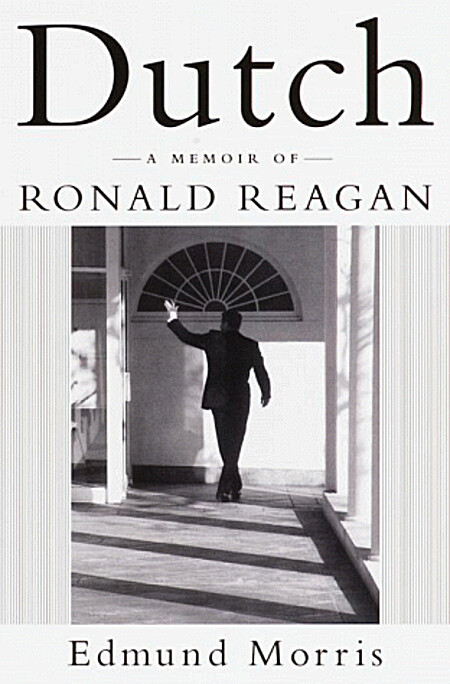 Dutch : a memoir of Ronald Reagan

"When Ronald Reagan moved into the White House in 1981, one of his first literary guests was Edmund Morris, the Pulitzer Prize-winning biographer of Theodore Roosevelt. Morris developed a fascination for the genial yet inscrutable President and, after Reagan's landslide reelection in 1984, put aside the second volume of his life of Roosevelt to become an observing eye and ear at the White House." "Thus began a long biographical pilgrimage to the heart of Ronald Reagan's mystery, beginning with his birth in 1911 in the depths of rural Illinois (where he is still remembered as "Dutch," the dreamy son of an alcoholic father and a fiercely religious mother) and progressing through the way stations of an amazingly varied career: young lifeguard (he saved seventy-seven lives), aspiring writer, ace sportscaster, film star, soldier, union leader, corporate spokesman, Governor, and President. Reagan granted Morris full access to his personal papers, including early autobiographical stories and a handwritten White House diary." "During thirteen years of obsessive archival research and interviews with Reagan and his family, friends, admirers and enemies (the book's enormous dramatis personae includes such varied characters as Mikhail Gorbachev, Michelangelo Antonioni, Elie Wiesel, Mario Savio, Francois Mitterrand, Grant Wood, and Zippy the Pinhead), Morris lived what amounted to a doppelganger life, studying the young "Dutch," the middle-aged Cold Warrior, and the septuagenarian Chief Executive with a closeness and dispassion, not to mention alternations of amusement, horror, and amazed respect, unmatched by any other presidential biographer."--Jacket.… (more)

LibraryThing member MeredithYvonne
I picked up this book after a random road trip through Eureka IL, where Reagan went to college. It's a bit dry, but it gives a fairly honest depiction of Reagan's life. I found his early history to be much more interesting than the later part which focuses on his foray into politics. I recommend this if there's anything you want to know about "Dutch".… (more)
4 more
LibraryThing member davetherave
Personally I found this a thoroughly enjoyable read, even though, at 670 pages, with another 70 or so of acknowledgements etc it might be more of doorstop to some, it provides a great insight into the kind of person Reagan was. A worthy reflection on the life of the man who is likely to go down in history as the most popular President the USA has had. That is, until the next Big Spender comes along.… (more)
LibraryThing member VyAch
The whole book is told from the point-of-view of a Gary Stu who conveniently and coincidentally runs into Reagan or parallels his life throughout. This self-insertion required the invention of many details; fictional end notes provide a veneer of verisimilitude, but actually make the entire work less trustworthy. I can't really suggest a better book, and I must admit this one is a page-turner, but it's definitely not the definitive biography of Reagan.… (more)
LibraryThing member jmcclain19
This book is quite the oddball. I decided to read it after Reagan's passing, hoping to learn more about a President that served two terms in my lifetime yet I was too young to know anything about. Morris takes a tack in writing this I've never seen before. Rather than do a traditional writing of the memoir's of Reagan - he takes a smorgasbord of individuals involved in all stages of Reagan's life and mashes them all together into one fictionalized character that tells the story. Either you'll love that idea or you'll hate it. I couldn't get past it. You never quite know who the fictionalized narrator really is speaking for throughout the book, and for me, you also never know what other sort of license Morris took with the story of Reagan's life. Bravo to him for trying something new, but I didn't particularly care for it - personally if I'm reading non-fiction I want to be sure everything in it's non-fiction, that's the hump I just couldn't get over with this book.… (more)
LibraryThing member librisissimo
I assume (with n;o good reason) that Morris is citing his sources accurately, but he seems to delight in presenting Reagan in a negative fashion. Note that Morris makes himself a character in the narrative, but was not actually involved in any of the events he chronicles, a controversial tactic much discussed on publication.
I learned a lot about Reagan, and admired much of it; I don't think Morris likes him nearly so well.
Compare to his previous biography of TR, a self-proclaimed progressive and omnibiblious intellectual: RR was very nearly the opposite of what Morris approved.… (more)
Fewer

President Reagan: The Role of a Lifetime by Lou Cannon
The Rise of Theodore Roosevelt by Edmund Morris
Governor Reagan: His Rise to Power by Lou Cannon
Truman by David G. McCullough
Shadow : five presidents and the legacy of Watergate by Bob Woodward
11 more
Theodore Rex by Edmund Morris
Means of ascent by Robert A. Caro
The Downing Street Years by Margaret Thatcher
Lincoln by David Herbert Donald
The years of Lyndon Johnson. [Volume 3], Master of the senate by Robert A. Caro
Bush at war by Bob Woodward
John Adams by David G. McCullough
Lindbergh by A. Scott Berg
Colonel Roosevelt by Edmund Morris
American Lion: Andrew Jackson in the White House by Jon Meacham
Presidential Courage: Brave Leaders and How They Changed America 1789-1989 by Michael R. Beschloss
Fewer