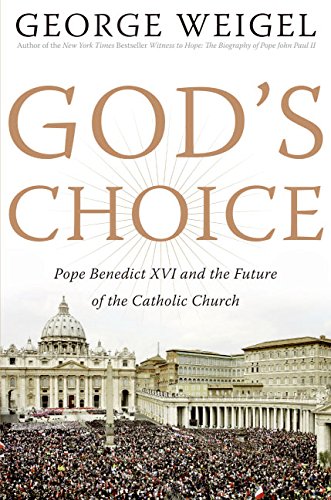 God's Choice: Pope Benedict XVI and the Future of the Catholic Church

When John Paul II lapsed into illness for the last time, people flocked from all over the world to pray. He had become a father figure to millions, who now felt orphaned. After more than 26 years of his guidance, the Catholic Church is entering a new age, with its bedrock traditions intact but with pressing questions to address in a rapidly changing world. Beginning with the story of John Paul's final months, this book offers an inside account of the conclave that produced Benedict XVI. Vatican correspondent Weigel also surveys the current state of the Church around the world: its thriving populations in Africa, Latin America, and parts of the post-communist world; its collapse in western Europe; its continued struggles in Asia; and the vibrancy of Catholic life in the United States, even as the Church in America struggles to overcome its recent experience of scandal.--From publisher description.… (more)