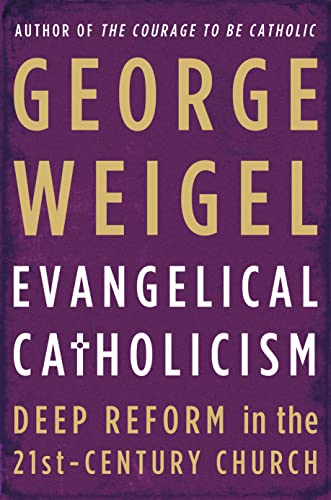 The Catholic Church is on the threshold of a bold new era in its two-thousand-year history. As the curtain comes down on the church defined by the sixteenth-century Counter-Reformation, the curtain is rising on the Evangelical Catholicism of the third millennium: a way of being Catholic that comes from over a century of Catholic reform; a mission-centered renewal honed by the Second Vatican Council and given compelling expression by Blessed John Paul II and Pope Benedict XVI. The gospel-centered Evangelical Catholicism of the future will send all the people of the Church into mission territory every day-a territory increasingly defined in the West by spiritual boredom and aggressive secularism. Confronting both these cultural challenges and the shadows cast by recent Catholic history, Evangelical Catholicism unapologetically proclaims the gospel of Jesus Christ as the truth of the world. It also molds disciples who witness to faith, hope, and love by the quality of their lives and the nobility of their aspirations. Thus the Catholicism of the twenty-first century and beyond will be a culture-forming counterculture, offering all men and women of good will a deeply humane alternative to the soul-stifling self-absorption of postmodernity. Drawing on thirty years of experience throughout the Catholic world, from its humblest parishes to its highest levels of authority, George Weigel proposes a deepening of faith-based and mission-driven Catholic reform that touches every facet of Catholic life-from the episcopate and the papacy to the priesthood and the consecrated life; from the renewal of the lay vocation in the world to the redefinition of the Church's engagement with public life; from the liturgy to the Church's intellectual life. Lay Catholics and clergy alike should welcome the challenge of this unique moment in the Church's history.… (more)

LibraryThing member rgrebenc
In the immediate wake of the election of Pope Francis, George Weigel was asked what he would like readers to take from his book (which was completed less than a year ago). His reply, I think, is no different than what it would have been when the volume was published: "A sense of hope for a bright Catholic future, in which a purified and revivified Catholicism, meeting the Lord once again on the Emmaus roads of the 21st century, rediscovers the power that comes from a commitment to mission."

Weigel's vision of a properly executed "commitment to mission" is the thread that runs throughout the book. Part One lays out his vision for Evangelical Catholicism covering its roots (EC is not something that needs to begin but rather something that needs to continue to be implemented), what it means for the Church and the world, and what "deep reform" (note that the subtitle is not subtle) would look like.

Part Two looks at how these reforms would impact the episcopate, the priesthood, the liturgy, religious life, lay persons, Catholic intellectual life, the Church's public policy advocacy, and the papacy. Weigel is not hesitant to point out historical and current problems in each of these areas, the roots of these problems, and correctives needed. Every member of the Church is addressed and challenged here. When finished with it, lay persons may want to pass this along to a priest or religious, even if that person only has time to read the chapter dealing with his vocation, and then discuss it with him. This would be a great way to engage those with a special religious vocation.

Particularly impressive is that the author appeals to Scripture, the authentic letter and spirit of Vatican II, and many Church documents from Leo XIII's "Rerum Novarum" to the latest encyclical, Benedict's "Caritas in Veritate." John Paul II, with whom Weigel is intimately familiar, naturally receives significant treatment not only because of this familiarity but because of the length of his pontificate and his desire to properly implement the reforms of Vatican II. Weigel clearly shows that his own proposals for reform are based solidly in recent (at least in relation to the age of the Church) teaching, thus in continuity with them, yet, like them, solidly grounded in Biblical roots.

If you are on the fence regarding purchasing this book, I suggest using the "Look Inside" feature in Amazon to peruse the table of contents and to read the prologue. This will provide the overview a potential reader needs to get a good sense of what Weigel dives into in admirable detail (he says in the acknowledgments that the "book is the product of some thirty years of reflection on the future of the Catholic Church" and it shows). Weigel's broad knowledge of history, both of the Church and of the world, his understanding of the culture, and his deep faith are on display once again.

Heartily recommended to convict the convinced, spur to action the lukewarm or disengaged, and challenge the rest.… (more)
3 more
LibraryThing member sullijo
George Weigel’s "Evangelical Catholicism" seeks to define a new way of being Catholic in the 21st century through a return to the missionary roots of the early Church.

The first part of the book follows the history of evangelical Catholicism (beginning with the teachings of Pope Leo XIII through the Second Vatican Council to the modern day) and outlines it basic characteristics.

The second part of the book then takes these themes and applies them to a variety of structures with the Church, including the episcopacy and priesthood, the liturgy, and the Church’s advocacy efforts. Weigel suggests ways in which these structures might be reformed in light of a great evangelical zeal.

I love the challenging vision of a robust, lived Catholicism presented by Weigel — a faith not of theologians or philosophers, but of evangelical disciples. And while I don’t agree with all of his specific recommendations, they represent a positive attempt to wrestle with how the Catholic faith will adapt in a time of increasing relativism and spiritual confusion.… (more)
LibraryThing member 2wonderY
Boy I'm glad I didn't buy this one; it was quite disappointing.

I hoped for a report on a vibrant and alive Church. Instead I got politics and forma.

Bah!
LibraryThing member StFrancisofAssisi
In Evangelical Catholicism, Catholic theologian George Weigel proposes a program of faith-based reform that confronts these challenges head on. An urgent call to arms, Evangelical Catholicism reminds Catholics of the evangelical vocation into which they were baptized and of the joy and courage that comes from living on this side of the Resurrection.… (more)
Fewer

The End and the Beginning: Pope John Paul II : The Struggle for Freedom, the Last Years, the Legacy by George Weigel
The Courage to be Catholic: Crisis, Reform and the Future of the Church by George Weigel