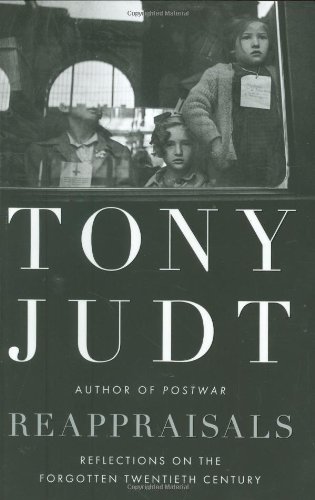 The accelerating changes of the past generation have been accompanied by a comparably accelerated amnesia. The twentieth century has become "history" at an unprecedented rate. The world of 2007 is so utterly unlike that of even 1987, much less any earlier time, that we have lost touch with our immediate past even before we have begun to make sense of it. In less than a generation, the headlong advance of globalization, with the geographical shifts of emphasis and influence it brings in its wake, has altered the structures of thought that had been essentially unchanged since the European industrial revolution. Quite literally, we don't know where we came from. From the history of the neglect and recovery of the Holocaust and the challenge of "evil" in the understanding of the European past to the rise and fall of the "state" in public affairs and the displacement of history by "heritage," Judt takes us beyond what we think we know to show us how we came to know it and reveals how many aspects of our history have been sacrificed in the triumph of mythmaking over understanding, collective identity over truth, and denial over memory.--From amazon.com.… (more)

From acclaimed author of "Postwar", Historian Tony Judt republishes a collection of essays and book reviews mostly written for the New York Review of Books from the past 20 years. This is a highly complex, all-engrossing exploration of 20th century history of humanity, not to be read lightly, but to be absorbed.

The purpose of this re-publication according to Judt is to confront the ahistorical and unpolitical age we live in and to show that we still have much to learn from the past. The essays are split up into three parts: political intellectualism, revisionist European and Zionist history, and critiques on America.

Political Intellectualism:
The first series of essays, though most difficult to read, are the most intellectually engaging given their academic nature. Judt appears to be confronting his own conflicted past, his own flirtations with early Zionism, romanticized Marxism and intellectual criticism. Each of the intellectuals he writes about (eg. Koestler, Levi, Arendt, Camus, Hobsbawm and Said) are almost a reflection of Judt himself and his own intellectual struggles, coping with his own limitations, as an academic, a Jew, a European and an American.

On Zionism, Judt attempts to explain why so many European intellectuals like Hannah Arendt rejected it, why its jingoistic appeal was as dangerous then as it is today. Judt, though a socialist himself, is extremely critical of Marxism and it's "dark cousin" in communism. Judt chastizes Marxists like Hobsbawm and Koestner for their unrelenting support for Soviet Communism despite its repressive nature shown time and time again. With Marxism once again on the rise in postmodern academic circles in response to the inequalities generated by neo-globalization, here Judt reminds us of the dangers of going down that same rabbit hole.

Revisionist European and Zionist History:
In this next section it is easy to see why Judt is so polarizing, why he is high on the hit list of the anti-defamation league. First through an exploration of French history (which is Judt's area of study), he explains the contemporary yet terrible mistake of substituting public memory for history. That "What is new, at least in the modern era, is the neglect of history". The modern obsession with sentimental memorialization is "parasitic upon the presumption of historical knowledge" (p215).

Judt leaves his most biting criticisms for Zionism. He writes: "Instead, the ironies of the Zionist dream have come full circle... many observers believe that one way to take the sting out of rising anti-Semitism in the suburbs of Paris or the streets of Jakarta would be for Israel to give the Palestinians back their land" (p291). It is no doubt Judt's opinions against Israel which will draw many a negative review of this book. Whether you agree with him or not, Judt stays true to the art of intellectual criticism instead of acquiescing to the political pressure.

Anti-Americanism:
In the last series of essays, Judt follows a predictable pattern of arguments against America in the second-half of the 20th century such as McCarthyism, the ills of Henry Kissinger and Richard Nixon, and the limitations of American Cold War thinking. Throughout these essays Judt makes an important point that American exceptionalism within American history is a hindrance to intellectual progress, that critical thinking has all but disappeared in this politically centrist era.

Judt's final essay on the "Social Question" is a highly nuanced look at the debate over the Welfare State. As a socialist, it would be expected for Judt to take the predictable line to save the Welfare State, but instead Judt looks critically at past failures and instead argues that there is no one size fits all solution. He readily acknowledges that "some must lose for all to gain" (p430). The old bi-partisan solutions are equally constrained by the flaws of party politics. In order to solve the "Social Question" we must demand that our political leaders have the intelligence, the determination and the logistical capacity to solve these complex problems of today and tomorrow.

One minor omission that I would've like to have seen included in the book are the author replies and exchanges. Perhaps in another edition. Overall, Judt has put together a highly relevant, intellectually engaging collection of essays that will remind us to forever be critical and to always challenge the status quo.… (more)
5 more
LibraryThing member Shrike58
This collection of essays and reviews is tied together by Judt's plea for a reconsideration of the wisdom and experiences of the 20th century, in the face of the triumph of globalism that has suffused the conventional wisdom since the collapse of the Soviet Union and the Warsaw Pact. The author's case being fortuitously boosted by the return of history to chastise those who claimed that total victory had been won for cult of the market and the diminuation of the providential state.

On the whole, the best essays are those reviews that tend to be closely tied to a biographical subject; an Arthur Koestler, an Albert Camus, or a Whittaker Chambers, to cite several examples. The irony here is that the critiques offered by Judt in regards to the dominant policy trends of the last decade or so now feel a little dated, seeing as the current emergency has brought the return of history, and given a jolt to economic and social debate at the world and national levels. The big question, of course, is whether we get a vigorous new social democratic practice out of this, or a vigorous new neo-fascism.… (more)
LibraryThing member ensvenskitaiwan
All the essays are book reviews, and he seems more interested in addressing the book and specifying where the author is wrong than in exploring the ideas and thinking of the historians and public intellectuals that you expect to be the topic of each essay. A bit disappointing, really, as I was looking forward to reading essays dealing directly with these thinkers and their ideas.… (more)
LibraryThing member jcvogan1
It's a collection of essays, most of which were published in the NYRB. European intellectual history in the early Cold War is the theme for the first half, which is the best. Afterwards it becomes a little bit of a grab-bag, although each essay on its own is excellent.
LibraryThing member varske
This is an excellent book which reminds us what we had forgotten until the financial crisis, when despite all the neocon propaganda we needed the state to bale out the banks. It reminds us that we have states for a reason, not just to get in the way of capitalists. It also reminds us that we should still fight for the rule of law in Europe and oppose Putin's tricks.… (more)
LibraryThing member ohernaes
Historian Judt's essays about various people and themes of the post war period in Europe, often in the form of extended book reviews. Intellectual commitment or opposition to communism a red thread. Israel another. I guess the book is sort of like a supplement chapter to the big Postwar: A history of Europe since 1945 from 2005.

Believes today's political squabbles are often foolish. Clear about the welfare state as "born of a cross-party twentieth-century consensus. It was implemented, in most cases, by liberals or conservatives who had entered public life well before 1914 and for whom the public provision of universal medical services, old age pensions, unemployment and sickness insurance, free education, subsidized public transport, and the other prerequisites of a stable civil order represented not the first stage of twentieth-century socialism but the culmination of late-nineteenth-century reformist liberalism. A similar perspective informed the thinking of many New Dealers in the United States (p. 10)."

Interesting thoughts on what is the relevant counterfactual for Italy - could it be that some of the inefficiency helped keep a fractious country together?

One great thing with Judt is that he is almost always criticizing all sides of a debate. But he clearly has much sympathy with what used to be the left. The last chapter is partly about how the left must come to terms with its own responsibilities for what went wrong in the 20th century to become a good alternative again.… (more)
Fewer

Thinking the Twentieth Century by Tony Judt
The coming of the Third Reich by Richard J. Evans
The Vertigo Years: Europe, 1900-1914 by Philipp Blom
Sleepwalkers : how Europe went to war in 1914 by Christopher M. Clark
The American future : a history by Simon Schama
1 more
The Third Reich in power, 1933-1939 by Richard J Evans
Fewer