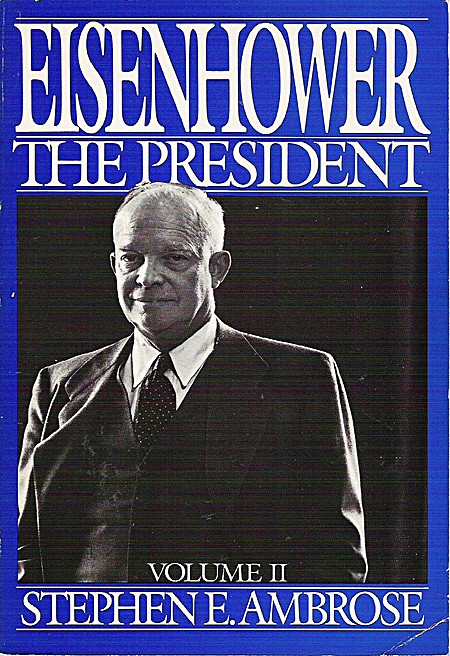 Eisenhower: The President, the second and concluding volume of Stephen Ambrose's brilliant biography, is the first assessment of a postwar President based on access to the entire record. It covers a wide range of subjects, including Eisenhower's rejection of the near-unanimous advice he received as President to use atomic weapons; his thinking on defense policy and the Cold War; his handling of a multitude of foreign-affairs crises; his attitudes and actions on civil rights; his views on Joseph McCarthy and on communism. Also illuminated are Eisenhower's relations with Nixon, Truman, Khrushchev, de Gaulle, and other world leaders. Ambrose provides us with an extraordinary portrait -- fairminded and enormously well-informed -- of the man, both decent and complex, who is increasingly regarded as one of the twentieth century's greatest Presidents.… (more)

Ambrose did an excellent job of discussing the positive contributions of Ike as president and also talking about his failings. Chief of those failings is probably not taking a stronger stand on civil rights issues. When asked his opinion of school segregation being struck down by the Supreme Court he said his job was to enforce the law and he would do so to the best of his ability but that he recognized that you could not pass a law to make people feel a certain way about a subject. His preference was to gradually change the south. At the same time however, he desegregated Washington DC and all of the military so no once can say he did nothing to make things better, only that he did not take a strong public stand on the issues of the day as many wanted to see.

One of the best gifts of the Eisenhower presidency was his military experience. He was asked, nay, begged by his advisors on many occaisions to use nukes. I want to say it there were 5 occasions in one year where DOD and his advisors recommended their use and he said no. I think a man without a military background would have eventually given in to the pressure and followed the military experts' advice at some point. But Ike had seen war himself. He had engaged in a lot of diplomacy with world leaders as the supreme commander in Europe and he was confident in making his own decisions on these matters even when he was practically standing alone against his advisors.

Ike identified himself as a progressive Republican. He did not feel many of the social programs of the New Deal (Social Security) could be repealed. This dismay some of the old guard Republican party. He was very serious about a balanced budget and wary of tax cuts unless they were accompanied by less spending. The only area where he wanted to spend more than many in Congress was foreign aid. He felt communism could be beaten with foreign aid better than with military might and he would rather spend dollars than soldiers.

Ike never really warmed to Nixon. He never felt like matured and grew as a person. He supported his bid for president but it's clear that he would liked to have seen someone better but couldn't find anyone.

Overall a good read though a bit dry.
… (more)