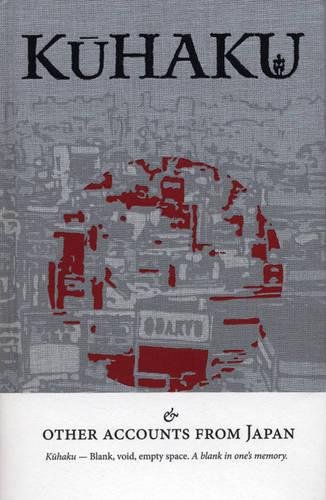 Kuhaku & Other Accounts from Japan

"What better way to invite a reader to explore the lavish surfaces and lonely depths of contemporary Japan than with a book so well-designed it whispers 'covet me' from across the room? ... Inconclusive in the best possible way, by turns pointed and generous,Kuhaku paints a shifting portrait of a shifting place." --Ellis Avery,Kyoto Journal "[Chin Music Press] is a company that is rewriting the rule book." --Bookslut Travel past the temples and tourist sites and into the mind of modern Japan with this anthology, the literary equivalent of a knockdown pitch. Sixteen stories and essays by different writers destroy the many stereotypes about Japan. Say farewell to Madame Butterfly and the samurai ethic, and say hello to a complex nation that makes both a frustrating and fascinating home. This collection includes stories on everything from taking out the garbage to cheating on your spouse. It also has an irreverent and informative glossary of real-world Japanese terms, four-color artwork and a Zen whiskey priest who would make Graham Greene proud. When we set out to find stories forKuhaku & Other Accounts from Japan, we knew what we wanted: candid tales of life in Japan that weren't trying to slice and dice the country and the culture into digestable nuggets. We weren't looking for Ph.D. dissertations, just smartly told tales from the street. Having lived in Japan for a long time, we realized these stories were everywhere. We tracked the writers down, asked permission to publish their tales, or more often, prodded them to put that story they had told us down on paper. Just about everybody responded favorably. Kuhaku's stories come from everywhere: tales told over beers in a pub, stories of corporate drudgery related during the lunch hour, doodlings on napkins at the local Starbucks and professional pieces produced on deadline.… (more)

LibraryThing member dbsovereign
Leave it to the expats to give you some unusual takes on living in Japan, fuse that voice with the Outsider Japanese voice and you have a unique blend that pushes boundaries - they make you think. These essays are at turns light-hearted and somber, yet filled with the insight provided by each of its unique the writers. A couple extraordinarily funny.… (more)
1 more
LibraryThing member roulette.russe
This book is a collection of short to very short (from 1 to 20 pages, usually exactly 10) stories about people living in Japan, mostly foreigners but also from Japanese authors writing in English (and for some reason, extracts from a book written and published in Japanese).
It's a fast read and as the preface warns, it "brought together a group of writers - a mix of Westerners and Japanese - who probably wouldn't even get along if they were stuck in the same room". Which also means, as a reader you'll probably like some stories a lot and then want to throw the book away when reading others...
Well, at least it happened to me.

Positive first:
For me, the priceless element of this book was the humour. Some stories were written almost like a stand up comedy sketch, some had only sudden sparks of it in tongue-in-cheek comments, but it was worth the read and made me laugh. Stories in that category include my favorite of all: Life with a Bilingual Dog, by Robert Juppe; in which a foreigner gains instant fame (and shame) because of his new dog, Answers to Correspondents (Cal Ranson), Canned Coffee, and Lunch Break (both by David Cady).

There was also a not funny at all but very important story about domestic violence in Japan and a woman who devotes her "retired" life to help victims by founding shelters ; that story is A Very Happy Life, by Takehiko Kambayashi.

And then, there is the story that made me understand one reason why this was being published: the publisher's own account of a very bad work experience at a company that is not named but hinted to in such precise terms, if you don't guess what he's talking about, you haven't lived in Japan. I thought OOOOOOHHH, so this is a REVENGE book! Made me feel like I should kind of do the same with the awful awful company I gave four precious years of my life to...

Let's get to the negative...
This is my review and my opinion, so what I hated, you might LOVE. But I want to warn you anyway.
Surprisingly for a book focusing on foreigners' experience of Japan, there is not much whining about Japanese society as a whole (you know, swooping generalizations...), which is great! Except for Sharon Moshavi's two essays, one called "Groped" but not really about groping or sexual harassment, the other about trash and how she feels violated by her neighbours obsession for her trash. She's not wrong, thought.

One big question mark for me was why were 3 parts of an already published Japanese book focusing on women stuck in unhappy marriages and cheating on their husband. Actually, the 3 stories were almost identical and to be honest I felt they were put there not so much to express anything about Japanese women's view on marriage, infidelity, life choices, etc. but rather as (foreigner) male fantasies; the first story even focuses on a woman suddenly deciding to ask a blue-eyes foreigner to "take her" in a hotel room while she is pregnant of her Japanese husband (later follows a scene where she is "having sex" while changing a diaper, but as a woman I would rather say: he is penetrating her while she is changing a diaper...). The 2nd and 3rd stories translated feature two other unhappy married women, blaming themselves and cheating or working in the sex industry. The women in these stories are never depicted as strong, independent and making their own choices, but rather as the title implies, "That Floating Feeling", as lost little creatures riddled with guilt after serving as receptacles to men who don't really care about them more than their husband does...
It's a pity that these stereotypes about Japanese women being sexual but self-effacing and Japanese men being bad husbands are still being put out there for Western (men) to congratulate themselves...

That's not the only thing that made me feel this book is very much male-reader-oriented. There is a whole story recalling in details one guy's "experiment" at visiting every kind of sex industry he can find, and being paid money to write about it in a magazine (and the "irony" of it is that his wife gave him the contact for this job but doesn't know what the job is... I guess this story was supposed to go in the "funny" section, but it wasn't to me). I felt a bit out of place reading this a few pages away from the true account of shelters for victims of domestic violence...
And as if that was not enough, there are still more "jokes" about it in the glossary of the book, because hey, it's really helpful to know how to ask in Japanese for a blow-job, right?

So yup, as you can see, there are many types of stories in this book. You'll probably find something you like, but you'll probably have to skip some parts (or roll your eyes a lot) if you are not a white heterosexual man.… (more)
Fewer

Learning to bow : an American teacher in a Japanese school by Bruce S. Feiler
Known and Strange Things: Essays by Teju Cole
A Field Guide to Getting Lost by Rebecca Solnit
A comrade lost and found : a Beijing story by Jan Wong
Graffiti: Two Thousand Years of Wall Writing by Robert George Reisner
13 more
The World : Travels 1950-2000 by Jan Morris
In praise of shadows by Jun'ichiro Tanizaki
Haruki Murakami and the Music of Words by Jay Rubin
Through the children's gate : a home in New York by Adam Gopnik
The Posthuman Dada Guide: Tzara and Lenin Play Chess (Public Square) by Andrei Codrescu
Yoga for people who can't be bothered to do it by Geoff Dyer
McSweeney's Quarterly Concern. No. 13, An assorted sampler of North American comic drawings, strips, and illustrated stories, etc. by Chris Ware
Nothing To Be Frightened Of by Julian Barnes
Killing Commendatore : A Novel by Haruki Murakami
Essays of E.B. White by E. B. White
Vermeer in Bosnia : a reader by Lawrence Weschler
Take the Cannoli : Stories from the New World by Sarah Vowell
Inventing Japan, 1853-1964 by Ian Buruma
Fewer