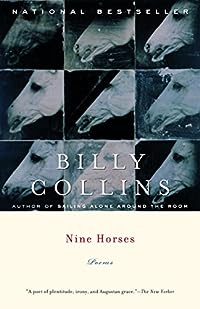 Nine Horses, Billy Collins's first book of new poems since Picnic, Lightning in 1998, is the latest curve in the phenomenal trajectory of this poet's career. Already in his forties when he debuted with a full-length book, The Apple That Astonished Paris, Collins has become the first poet since Robert Frost to combine high critical acclaim with broad popular appeal. And, as if to crown this success, he was appointed Poet Laureate of the United States for 2001-2002, and reappointed for 2002-2003. What accounts for this remarkable achievement is the poems themselves, quiet meditations grounded in everyday life that ascend effortlessly into eye-opening imaginative realms. These new poems, in which Collins continues his delicate negotiations between the clear and the mysterious, the comic and the elegiac, are sure to sustain and increase his audience of avid readers. "From the Hardcover edition."… (more)

LibraryThing member FionaCat
I don't normally read poetry but I flipped through this one while I was cataloging it (I admit, it was mostly because of the horses on the cover) and ended up taking it home.

These poems are so deceptively simple yet powerful. Everyday occurences and objects become something magical in the hands of
Show More
Collins. He both awes me with his skill and gives me hope that maybe I could actually write a decent poem.

I read one of the poems ("Aimless Love") out loud to a friend and actually got chills down my spine, which I don't think has ever happened to me while reading a poem. Collins' poems are spare, no fancy imagery, no overwrought emotions but they distill life into its essence, like holding up a lens that sharpens one's vision of the world.

I look forward to reading more of Collins' poems -- and maybe trying to write a few of my own.
Show Less
10 more
LibraryThing member owenre
What wonderful direct poems. I loved this and savored it, eager for the next, but reluctant to move on. I don't read a lot of poetry, so I am perhaps not the best judge of verse, but these spoke to me.
LibraryThing member SunnySD
I picked up Nine Horses on a whim ( I liked the title, and the reviews here looked promising) and although it's not at all horse-related in the sense the title suggests, I enjoyed it very much. Collins' poems are lyric and accessible at the same time. He muses on every day matters -- 3 AM
Show More
wakefulness, love and domesticity, or the simple act of watching the scenery click by on a train trip -- and makes them experiences worthy of remembering.

I'm not usually a poetry reader, so this isn't a particularly literary review, but today I've been more watchful for the beauty in the everyday. I'll look for Collins' name in the future if a poetic mood strikes me, and I'm adding Nine Horses to my "books to purchase" list.
Show Less
LibraryThing member Iralell
If you want to read accessible, but great poetry, read Billy Collins. Nostalgia, chuckles and things that make you go "hmmm."
LibraryThing member realbigcat
Billy Collins is one of my favorite poets. In this collection titled Nine Horses, Collins again brings his ability to take simple things and find their beauty through words. The best poets give you the ability to really visualize the words through your own imagination. Afterall who could write so
Show More
eloquently about a dead roadside groundhog. The collection is diverse and well worth the time spent.
Show Less
LibraryThing member pocketmermaid
Billy Collins is kind of amazing. Even though there isn't one poem that rings out to me specifically as particularly mind-curling, I know I'll be returning to this book again and again. In fact, I'm planning on it.
LibraryThing member Poindextrix
Beautiful poetry from an amazing modern poet.
LibraryThing member Oh_Carolyn
Clear but never pedestrian, welcoming to the reader. Perfect for picking up for a few minutes, while you wait for a late friend to arrive, for example. "Rooms" and "Colorado" are my favorites in this collection.
LibraryThing member whitreidtan
My son is suffering through poetry in his high school English class. He does not find it easy to see symbolism or to plumb behind metaphor for meaning. He already dislikes the class and this unit finds him struggling terribly. I remember feeling a little at a loss myself when reading poetry despite
Show More
my general facility with all things English class related. Unlike my boy, I could eventually winkle out a meaning acceptable enough to earn me praise but the work of it left me unwilling to read poetry on my own. And this has stayed the case for twenty some years now. But for some reason, when I saw Billy Collins' collection, Nine Horses, I was drawn to it. And the word "Poems" on the cover did not make me immediately want to run and hide. So I brought it home and now I've read it. And I wish that my son could be studying some of the simple, natural, and elegant poems contained in this collection. Yes, because they are accessible but mostly because they are wonderful.

Collins captures the beauty of the natural world and of our place within it. He writes of the stages of life and the everyday. And he presents it all in clear and lovely verse. Sometimes he makes surprising but accurate comparisons, sometimes he pops in a twist on the expected, and sometimes he writes something witty and tongue in cheek, but overall and most of the time the poems are infused with a sense of familiarity and comfort. This is an eloquent and pleasing collection to be sure and I'll have to search out his others to allow myself to slip into the plain and profound beauty of his language and imagery again and again.
Show Less
LibraryThing member RidgewayGirl
After three days of steady, inconsolable rain,
I walk through the rooms of the house
wondering which would be best to die in.

I read very little poetry. Laughably little, embarrassingly little. But [[Billy Collins]] reminds me here, as he always does, that poetry is not sentimental or schlocky or
Show More
dull. [Nine Horses: Poems] was just like the other books of his that I've read, slowly, a poem or two a day. There are poems about yearning and love and also poems about the weather or what he sees from the window of a train to Albany and sometimes they are all present in the same poem. I'm sorry to be finished with this slender volume.

Before it was over
I took out a pencil and a notepad
and figured out roughly what was left --
a small box of Octobers, a handful of Aprils,

little time to waste reading a large novel
on the couch every evening,
a few candles flaming in the corners of the room.
a fishbowl of Mondays, a row of Fridays --

yet I cannot come up with anything
better than to strike a match,
settle in under a light blanket,
and open to the first sentence of Clarissa.
Show Less
LibraryThing member Richj
"We are busy doing nothing" Collins says of poets and in these poems that is true. A lot of work went into them - the attention to words, phrasing, cadence - and it doesn't result in much. He starts with promising ideas but they don't go anywhere. See "Absence," "Paris," "Trompe L'Oeil," "Albany,"
Show More
"Rooms." Very rarely - "Study in Orange and White" - he has an idea that makes it worth reading the whole poem. But mostly these are poems with no center, "no there there." The work is in four parts and the last two are better. Collins is best when he writes about nearly nothing - "The Great Walter Pater" or "Bermuda." He would have been good on the rewrite of "Last Year at Marienbad." With so many poets with something to say trying to be heard it's a shame that he gets so much of the stage for minor statements.
Show Less
Fewer