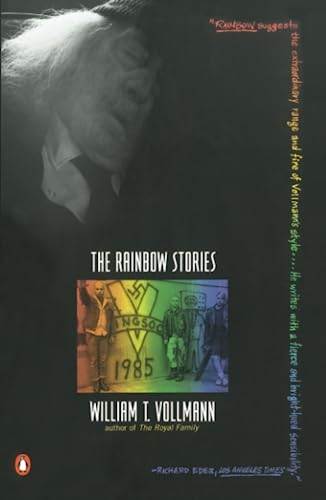 The debut collection of stories from the National Book-Award winning author of Europe Central From a writer who has won comparison with Thomas Pynchon and William S. Burroughs comes thirteen unnerving and often breathtaking stories populated by punks and angels, skinheads and religious assassins, streetwalkers and fetishists--people who live outside the law and and the clear light of the every day. Set in landscapes as diverse as ancient Babylon, India, and the seamy underbelly of San Francisco, these daring and innovative tales are laced with Vollmann's fertile imagination. The Rainbow Stories ushers us into a world that bears an awful yet hypnotic resemblance to that of our deepest nightmares, confirming Vollmann's reputation as a dark visionary of contemporary fiction.… (more)

LibraryThing member edwinbcn
William T. Vollmann is an American author, who is seemingly underappreciated. Perhaps this is in part because of his unusual career and entry into writing, although a rough career from the lower rungs in society through hard work is part of the so-called American Dream. For another, it must be said that Vollmann's books are thick and difficult to read. Much of his work is a continuation and reinvention of "narrative journalism", which had its precursors in American fiction such as Truman Capote's In Cold Blood and Hunter S. Thompson's Hell's Angels. Vollmann's prose, at least in the case of The rainbow stories appears more literary, and the interpolations of the author often seem stylistic. In fact, the stories are, in man cases, so incredible that they are more likely fictional than not.

Another reason why The rainbow stories is somewhat forgotten may be because of the time it was published. 1989 marked the end of the decade, a decade which in itself seemed more like an afterglow of the mid-Sixties to mid-Seventies, while the 1990s presented a quite different world view. In subject matter and atmosphere, The rainbow stories appeal much more to the past decade of the 1970s. Besides, The rainbow stories are about a people who are repulsive to most ordinary people. Mainstream American readership is more likely to morally object to the lifestyles and scene described in The rainbow stories, than a somewhat more tolerant European readership, although as an American author who has not really broken through, Vollmann's work remains obscure among European readers aswell.

The rainbow stories is not about gay people. The rainbow rather refers to the full spectrum of light, from the infra red to ultra violet. The book is a collection of short stories and novellas, about people on the perifery of society, skinheads, prostitutes, beggars and drug addicts. Each sub-culture is represented by a shade of light: "Red Hands", "Ladies and Red Lights", "Scintillant Orange", "Yellow Rose", "The Yellow Sugar", "The Green Dress", "The Blue Wallet", "The Blue Yonder", "Indigo Engineers" and "Violet Hair". There are also stories with titles such as "The Visible Spectrum", which offers an introduction, "The White Knights" and "X-ray visions". In the case of some stories, the link between the colour and the sub-culture is easy to make, such as prostitutes and the "Red light". In other cases, the link between the colour and the scene is less obvious.

In all stories, violence plays a central role. Life at the fringe is clearly a rough ride. Vollmann has experienced much of this rough life himself, either as an aspect of his own life experience, or from a very near perspective, and certainly, later on, as a writer, in the form of extensive field research. The novel is interspersed with footnotes, referring to the author's field research, and, although never too intrusively, the author moderately features as an observer in some of the stories.

In addition to describing a kaleidoscopic scene of life experience, the author experiments with different genre and writing styles in various stories. Some stories belong to the genre of science fiction, and "Scintillant Orange" is particularly difficult to read. Vollmann has a magnificent command of the language, and his literary style should propel his fiction to a level far above that of many contemporary authors.

"The Blue Yonder" is the scariest story, and the longest, at just over 100 pages. The story is about a mass murderer, who kills prostitutes who live on the street. Many of the descriptions are gory, and horrific in the degree of detail, describing violence. It contains a detailed description of an autopsy. However, it is also the most impressive story, which could well be read as a separate novella. Despite its horror, it has an impressive, deep poetic quality. In fact, in many stories in The rainbow stories there is a fascinating pull between beauty and horror, attraction and repulsion.

Perhaps, Vollmann is an author who has not yet fully broken through, and may find wider readership in the future. However, if he remains loyal to his own inimical style, this may not happen that soon. On the other hand, The rainbow stories could be read as a sociological time capsule: a collection of stories that describes a part of American society from which most people rather look away. It is perhaps a feat of irony, that all colours of the rainbow make up the white visible light, but that the stories described in The rainbow stories are stories of people in the dark.

(Update:) I was rereading a section of these today. The 'blue' story has perhaps the most loving and tender description of an autopsy I have ever read.… (more)
Fewer