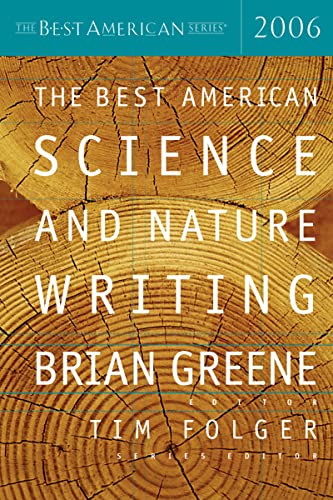 In his introduction to The Best American Science and Nature Writing 2006, Brian Greene writes that "science needs to be recognized for what it is: the ultimate in adventure stories." The twenty-five pieces in this year's collection take you on just such an adventure. Natalie Angier probes the origins of language, Paul Raffaele describes a remote Amazonian tribe untouched by the modern world, and Frans B. M. de Waal explains what a new breed of economists is learning from monkeys. Drake Bennett profiles the creator of Ecstasy and more than two hundred other psychedelic compounds -- a man hailed by some as one of the twentieth century's most important scientists. Some of the selections reflect the news of the past year. Daniel C. Dennett questions the debate over intelligent design -- is evolution just a theory? --while Chris Mooney reports on how this debate almost tore one small town apart. John Hockenberry examines how blogs are transforming the twenty-first-century battlefield, Larry Cahill probes the new science uncovering male and female brain differences, Daniel Roth explains why the programmer who made it easy to pirate movies over the Internet is now being courted by Hollywood, and Charles C. Mann looks at the dark side of increased human life expectancy. Reaching out beyond our own planet, Juan Maldacena questions whether we actually live in a three-dimensional world and whether gravity truly exists. Dennis Overbye surveys the continuing scientific mystery of time travel, and Robert Kunzig describes new x-ray images of the heavens, including black holes, exploding stars, colliding galaxies, and other wonders the eye can't see.… (more)

LibraryThing member yarmando
This is one of the best editions of this line since 2003. This has pieces on how strongly our brains react to swearing, on the man who has invented dozens of psychedelic drugs, on the development of X-ray telescopes, on how little we understand the delicate balances of bacteria in our bodies, on BitTorrent, and on the discovery of "ghost forests" and the geological faults that will probably destroy Seattle. There are difficult pieces on "The Illusion of Gravity" (are three dimensions just a hologram?) and "The Mysteries of Mass."

This opening line -- "Anna Nicole Smith's role as a harbinger of the future is not widely acknowledged" -- begins a fascinating exploration of the social and economic impact of the extension of human life spans; the first person to live to 150 probably has already been born.

I was particularly intrigued by Chorost's story of the scientific advances that are gradually letting this deaf man hear music again, and the profile of Arthur Aufderheide, paleopathologist, who autopsies mummies.… (more)