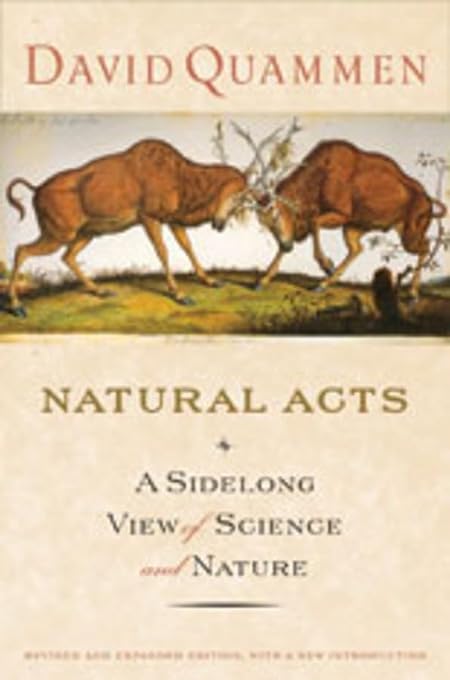 Natural Acts: A Sidelong View of Science and Nature

"Lively writing about science and nature depends less on the offering of good answers, I think, than on the offering of good questions," said David Quammen in the original introduction to Natural Acts. For more than two decades, he has stuck to that credo. In this updated version of his first essay collection, Quammen's lively curiosity leads him from New Mexico to Romania, from the Congo to the Amazon, asking questions about mosquitoes (what are their redeeming merits?), dinosaurs (how did they change the life of a dyslexic Vietnam vet?), and cloning (can it save endangered species?). This expanded edition returns to print Quammen's best-loved "Natural Acts" columns, which first appeared in Outside magazine in the early 1980s, and includes recent pieces such as "Planet of Weeds," an influential Harper's cover story. The new Natural Acts is an eye-opening journey that will please both Quammen fans and newcomers to his work.… (more)

LibraryThing member BeaverMeyer
This collection is hard to find, but it's a great one. Quammen's essays are phenomenal. He's the working man's biology writer. You don't have to have a degree to know what he's talking about, and I think that's because he took an English degree rather than biology. So he's just a great writer whose love of nature shines through in his essays.… (more)
3 more
LibraryThing member Devil_llama
This author has a style that, at his best, is a cross between Stephen J. Gould and Edward Abbey. The problem is, while the book started out very promising, with the most enjoyable writing I've read all year, it soon loses steam. When he writes about the quirks and oddities of the animal kingdom, he is not to be beat, but once he turns his attention to the human animal, the book drops into the ordinary. The people he writes about are interesting, and could perhaps make a good book, and in fact, did make a good book, but the stories were a total disappointment after the solid beginning of the first few chapters, a promise of something different and special that was never quite fulfilled. Perhaps if the author had excised those chapters, and focused on just the human stories, the lack would never have been noticed; or if he had ended with those wonderful notes instead of beginning, it would have seemed more like a sublime conclusion than an unfulfilled promise. Either way, the book has some real strong points, but don't expect it to be consistent.… (more)
LibraryThing member pilastr
If you'd rather have your "news of the weird" buried under a pile of forced and mixed metaphors, this is your guy. Just awful writing, the painful attempts to include literary references make it worse still.
LibraryThing member ritaer
an inordinate fondness for beetles an attribute of deity? mosquito as guardian of tropical forests, crows too intelligent
Fewer