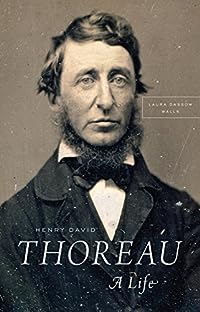 "Walden. yesterday I cam here to live." That entry from the journal of Henry David Thoreau, and the intellectual journey it began, would by themselves be enough to place Thoreau in the American pantheon. His attempt to "live deliberately" in a small woods at the edge of his hometown of Concord has been a touchstone for individualists and seekers since the publication of Walden in 1854. But there was much more to Thoreau than his brief experiment in living at Walden Pond. A member of the vibrant intellectual circle centered on his neighbor Ralph Waldo Emerson, he was also an ardent naturalist, a manual laborer and inventor, a radical political activist, and more. Many books have taken up various aspects of Thoreau's character and achievements, but, as Laura Dassow Walls writes, "Thoreau has never been captured between covers; he was too quixotic, mischievous, many-sided." Two hundred years after his birth, and two generations after the last full-scale biography, Walls renews Henry David Thoreau for us in all his profound, inspiring complexity. Drawing on Thoreau's copious writings, published and unpublished, Walls presents a Thoreau vigorously alive, full of quirks and contradictions: the young man shattered by the sudden death of his brother; the ambitious Harvard College student; the ecstatic visionary who closed Walden with an account of the regenerative power of the Cosmos. We meet the man whose belief in human freedom and the value of labor made him an uncompromising abolitionist; the solitary walker who found society in nature, but also found his own nature in the society of which he was a deeply interwoven part. And, running through it all, Thoreau the passionate naturalist, who, long before the age of environmentalism, saw tragedy for future generations in the human heedlessness around him. "The Thoreau I sought was not in any book, so I wrote this one," says Walls. The result is a Thoreau unlike any seen since he walked the streets of Concord, a Thoreau for our time and all time.--Dust jacket.… (more)

LibraryThing member michaelbartley
a very readable bio of thoreau. some interesting aspects of his life, one for most of his life he lived with his parents, his mother was a activity abolitionist, as was henry! in fact thoreau was one of the first public figures to speak out for john brown. thoreau made almost no money from his writing. his sexuality is not well known. he is only asked one woman to marry, she said no. in his writings he saw sex as a very natural thing. however there nothing in writings and he wrote in his journal almost every day about being in love in a erotic way. he saw sex as a spiritual act. a personal of great engery… (more)
3 more
LibraryThing member nmele
About the time I read a review of this book, my wife and I visited Concord, MA, and spent several hours at Walden Pond. Both of us had read and been profoundly impacted by Thoreau's "Walden" and I also by his essay on civil disobedience. I realized I wanted to read more about him, and Dassow's biography was the perfect book for me. I learned of Thoreau's intricate web of relationships and avid Abolitionism, his early acceptance of Darwin's thinking on evolution and his own late life research into evolution and what we now call ecology. Not to mention his understanding, just as the Indian Wars gained speed, that Native Americans deserved respect and dignified treatment, and that they could teach us much about how to live in our environment.… (more)
LibraryThing member DanDiercks
Beautifully written and as thorough as any biography on Thoreau. Having been to Walden Pond and walked on the ground where he build his cabin, reading the parts of Thoreau’s life from WP were all that more meaningful. This biography dispels the myth that Henry was a solitary man. He was anything but a loner. In fact, when he went on excursions, it was his preference to take someone along, and he usually did. Reading Walden is enough to given readers an appreciation of Thoreau’s powers of observation and documentation. He filled hundreds of notebooks during his lifetime, a treasure trove of information about nature and the wonders of nature. Laura Dassow Walls has given Thoreau fans a gift to complement the great author’s masterpiece, Walden.… (more)
LibraryThing member tungsten_peerts
Detailed, rich, and very moving. I actually shed some tears at the end: one gets to know Thoreau (or, I guess, to be accurate, Walls's version of him) so well, that his quiet death really leaves a mark in one's consciousness when it occurs. This beautiful biography is everything I could have wanted, and is sending me back to the works with a vengeance.… (more)
Fewer