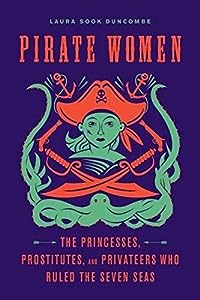 Pirate Women: The Princesses, Prostitutes, and Privateers Who Ruled the Seven Seas

In the first-ever Seven Seas history of the world's female buccaneers, Pirate Women: The Princesses, Prostitutes, and Privateers Who Ruled the Seven Seas tells the story of women, both real and legendary, who through the ages sailed alongside--and sometimes in command of--their male counterparts. These women came from all walks of life but had one thing in common: a desire for freedom. History has largely ignored these female swashbucklers, until now. Here are their stories, from ancient Norse princess Alfhild and warrior Rusla to Sayyida al-Hurra of the Barbary corsairs; from Grace O'Malley, who terrorized shipping operations around the British Isles during the reign of Queen Elizabeth I; to Cheng I Sao, who commanded a fleet of four hundred ships off China in the early nineteenth century. Author Laura Sook Duncombe also looks beyond the stories to the storytellers and mythmakers. What biases and agendas motivated them? What did they leave out? Pirate Women explores why and how these stories are told and passed down, and how history changes depending on who is recording it. It's the most comprehensive overview of women pirates in one volume and chock-full of swashbuckling adventures that pull these unique women from the shadows into the spotlight that they deserve.… (more)

Women Warriors: An Unexpected History by Pamela D. Toler
Bad Girls Throughout History: 100 Remarkable Women Who Changed the World (Women in History Book, Book of Women Who Changed the World) by Ann Shen
4,000 YEARS OF UPPITY WOMEN by Vicki León
You Can't Touch My Hair: And Other Things I Still Have to Explain by Phoebe Robinson
Rebel Women by Rosalind Miles
1 more
Visionary Women: How Rachel Carson, Jane Jacobs, Jane Goodall, and Alice Waters Changed Our World by Andrea Barnet
Fewer

LibraryThing member bookworm12
This is a nonfiction look at female pirates throughout history. I loved learning about the incredibly strong women who overcame everything from being sold in marriage to rape and became sea-faring warriors instead. Grace O'Malley was one of my favorites and I wish I could have been a fly on the
Show More
wall when she met Queen Elizabeth in person. The Chinese pirate, Ching Shih, was another amazing one and is considered the most successful pirate in history. The author gets side tracked at times, discussing film summaries and the slant that male historians have given to these women's stories. She also focuses on a few fictional pirates, which I could have skipped.
Show Less
5 more
LibraryThing member MickyFine
This non-fiction title recounts the stories of female pirates both real and fictional from the ancient Mediterranean to the twentieth century. I finished the book with really mixed feelings about it and thus this review is more of a pros and cons list.

Pros:
-Duncombe takes an intersectional feminist
Show More
approach to this history, which is lovely to see.
-The women highlighted here are fascinating and worthy of broader awareness.
-Awesome lady pirates!

Cons:
-Duncombe states herself she's not an historian and it shows in spots.
-Some passages which are labelled as context turn out to be extensive digressions.
-Duncombe treats both real and fictional/folklore lady pirates identically, making it difficult to differentiate between them without flipping back.
-The final chapter on women pirates in cinema is pretty weak, focused exclusively on Hollywood film (although she drops tantalizing hints about Italian female-led pirate films in the 1950s), and ends up being a rant about the lack of female-led films, which is a rant I understand but not what I came for to a book about women pirates. Not the best final note for the book.

Ultimate verdict, worth picking up but you may want to skim bits and I'd skip the final chapter altogether.
Show Less
LibraryThing member DrFuriosa
An engaging glimpse at the frustrations of untold histories and the lengths we must go to fill in the gaps. This is a postmodern history, so don't expect a stereotypical tome. The chapter on Sister Ping was the most provocative. Seriously, more pirate movies featuring women!
LibraryThing member lbswiener
Pirate Women is a highly researched book about women pirates. The book is very interesting and informative. Its downfall, however, is the lengthy chapter about women in movies. As a woman, I find this entire chapter having nothing whatsoever to do with the history of women pirates and is quite
Show More
tedious. Consequently, the rating of only three stars in this review.
Show Less
LibraryThing member cloidl
I would agree with other reviews that overtime the author trying to make everything into an argument for her feminism cause is getting a bit tiresome. The beginning on the book seemed better and fairly well researched. Not sure if it was me getting tired of her, or the quality dropping but it
Show More
dragged towards the end.
Show Less
LibraryThing member cloidl
It's okay, not to bad, but really a bit heavy handed on the feminism.
Fewer