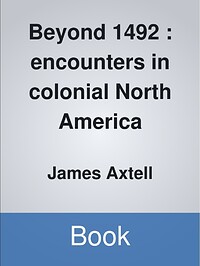 Beyond 1492 : encounters in colonial North America

In this provocative and timely collection of essays--five published for the first time--one of the most important ethnohistorians writing today, James Axtell, explores the key role of imagination both in our perception of strangers and in the writing of history. Coinciding with the 500th anniversary of Columbus's "discovery" of America, this collection covers a wide range of topics dealing with American history. Three essays view the invasion of North America from the perspective of the Indians, whose land it was. The very first meetings, he finds, were nearly always peaceful. Other essays describe native encounters with colonial traders--creating "the first consumer revolution"--and Jesuit missionaries in Canada and Mexico. Despite the tragedy of many of the encounters, Axtell also finds that there was much humor in Indian-European negotiations over peace, sex, and war. In the final section he conducts searching analyses of how college textbooks treat the initial century of American history, how America's human face changed from all brown in 1492 to predominantly white and black by 1792, and how we handled moral questions during the Quincentenary. He concludes with an extensive review of the Quincentenary scholarship--books, films, TV, and museum exhibits--and suggestions for how we can assimilate what we have learned.… (more)

Manitou and providence : Indians, Europeans, and the making of New England, 1500-1643 by Neal Salisbury
The Red King's rebellion : racial politics in New England, 1675-1678 by Russell Bourne
The invasion of America : Indians, colonialism, and the cant of conquest by Francis Jennings
Red, white, and black: the peoples of early America by Gary B. Nash
Captives & cousins : slavery, kinship, and community in the Southwest borderlands by James Brooks, 1955-
1 more
From Puritan to Yankee; character and the social order in Connecticut, 1690-1765 by Richard L. Bushman
Fewer