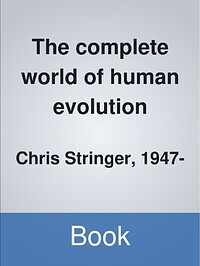 The complete world of human evolution

The earliest apes evolved around twenty million years ago, yet Homo sapiens has existed for a mere 160,000 years. In the intervening period, dozens of species of early ape and human have lived and died out, leaving behind the fossilized remains that have helped to make the detailed picture of our evolution revealed here.Since this book was first published in 2005 there have been exciting new developments in the story of ape and human evolution, and the authors take account of them in this revised edition. The big gap in the fossil record in Africa is beginning to be filled with the discovery of several new species of apes in Kenya and Ethiopia that date from ten to nine million years ago. There are new discoveries of Australopithecus, updates on the dating of hominin sites, results of new DNA analyses, and much more.Illustrated with photographs, diagrams, and reconstruction drawings, this is essential reading for anyone interested in human origins.… (more)

In search of the Neanderthals : solving the puzzle of human origins by Chris Stringer
Making silent stones speak : human evolution and the dawn of technology by Kathy Diane Schick
After the Ice: A Global Human History 20,000-5000 BC by Steven Mithen
Bones of contention : controversies in the search for human origins by Roger Lewin
Ancestors : in search of human origins by Donald C. Johanson
7 more
The Neandertal enigma : solving the mystery of modern human origins by James Shreeve
The Neanderthals rediscovered : how modern science is rewriting their history by Dimitra Papagianni
The emergence of man by John E. Pfeiffer
Lucy, the beginnings of humankind by Donald C. Johanson
The humans who went extinct : why Neanderthals died out and we survived by Clive Finlayson, 1955-
Mapping human history : discovering the past through our genes by Steve Olson
The great human diasporas : the history of diversity and evolution by L. L. (Luigi Luca) Cavalli-Sforza, 1922-
Fewer