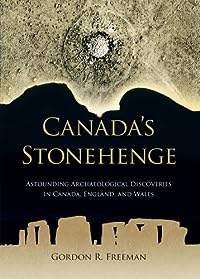 The discovery of a 5000-year-old Sun Temple and an ancient "time machine" - Stone Age calendar - in Canada led scientist Gordon Freeman to ground-breaking discoveries in Stonehenge. During fieldwork and research from 1986 to 2006, Freeman found striking similarities between the surface geometry of the two sites. These similarities push back the boundaries of written history and have far-reaching implications for North American and European history."Passion and science blend in this remarkable, readable book, as Freeman takes us along on his patient and exciting discovery of a 5000-year-old Temple in the plains of Alberta. What he finds at the Majorville Medicine Wheel in turn informs his convincing account of Stonehenge archaeoastronomy." -- Roald Hoffmann,chemist and writer, Cornell University, 1981 Nobel Prize in Chemistry"A fascinating chronicle of a scientist's investigations in two of the world's most intriguing ancient sites, Stonehenge in Britain and the Majorville Cairn and Medicine Wheel in Alberta, Canada. Freeman reveals that 5000 years ago, Britons and Plains Indians made precise astronomical observations at these sites, halfway around the world from one another, at nearly the same latitude. Canada's Stonehengeadds the flavour of the Canadian prairies to important new discoveries of Neolithic science." -- Alice B. Kehoe, Professor of Anthropology, Marquette University, worked with Astronomer John Eddy at the Moose Mountain Medicine WheelGordon Freemanwas born in 1930 in Hoffer, Saskatchewan, and was introduced to Stone Age artefacts at the age of six. His father collected stone projectile points and stone tools from the Saskatchewan prairie after dry winds had blown away tilled soil.He obtained an M.A. from the University of Saskatchewan, a Ph.D. from McGill, and a D.Phil. from Oxford. He is a Chemical Physicist, was for ten years Chairman of Physical and Theoretical Chemistry at the University of Alberta, and for thirty years Director of the Radiation Research Centre there. He is now a Professor Emeritus. For forty years he has pioneered interdisciplinary studies in chemistry, physics, and human societies. Interdisciplinary is now the standard approach to understanding in the sciences and humanities. He has published more than 450 articles, and two books.As a hobby he visited many archaeological sites in Canada, the United States, Britain, Ireland, Europe, and Asia. In 1980 he discovered a 5000-year-old Sun Temple in southern Alberta and has studied it ever since. In 1989 he took observation techniques he had developed in Alberta to England, to resolve the controversy that existed about a possible calendar in Stonehenge. In Canada's Stonehenge, Freeman displays the astonishingly beautiful, ancient calendars in southern Alberta and Stonehenge for the first time in recent centuries, with far- ranging implications for international prehistory and history.… (more)

The Stones of Time: Calendars, Sundials, and Stone Chambers of Ancient Ireland by Martin Brennan
Seed of knowledge, stone of plenty : understanding the lost technology of the megalith builders by John Burke
Bones : discovering the first Americans by Elaine Dewar
Stonehenge by Robin Heath
Inuksuit : silent messengers of the Arctic by Norman Hallendy
21 more
Prehistoric astronomy and ritual by Aubrey Burl
Prehistoric Avebury by Aubrey Burl
Stolen continents : the Americas through Indian eyes since 1492 by Ronald Wright
America's Stonehenge : the Mystery Hill story, from Ice Age to Stone Age by David Goudsward
The sacred network : megaliths, cathedrals, ley lines, and the power of shared consciousness by Christine Hardy
Megalithomania : artists, antiquarians, and archaeologists at the old stone monuments by John F. Michell
Secrets of the stones : the story of astro-archaeology by John F. Michell
How to read prehistoric monuments Understanding our ancient heritage. by Alan Butler
Great stone circles : fables, fictions, facts by Aubrey Burl
The search for lost America: The mysteries of the stone ruins by Salvatore Michael Trento
The Science of the Dogon: Decoding the African Mystery Tradition by Laird Scranton
On Stonehenge by Sir. Fred Hoyle
The astronomical significance of Stonehenge by C. A. (Cecil Augustus) Newham
Mysteries and discoveries of archaeoastronomy : from Giza to Easter Island by Giulio Magli
The modern antiquarian : a pre-millennial odyssey through megalithic Britain : including a gazetteer to over 300 prehistoric sites by Julian Cope
Prehistoric stone circles by Aubrey Burl
Those who came before : southwestern archeology in the National Park System : featuring photographs from the George A. Grant Collection and a portfolio by David Muench by Robert Hill Lister
Strangers devour the land by Boyce Richardson
We Were Not the Savages: First Nations History - Collision Between European and Native American Civilizations by Daniel N. Paul
Circles and Standing Stones: An Illustrated Exploration of Megalith Mysteries of Early Britain by Evan Hadingham
Stonehenge Decoded by Gerald S. Hawkins
Fewer