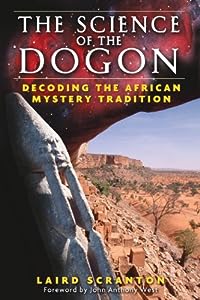 The Science of the Dogon: Decoding the African Mystery Tradition

The Dogon people of Mali, West Africa, are famous for their unique art and advanced cosmology. The Dogon's creation story describes how the one true god, Amma, created all the matter of the universe. Interestingly, the myths that depict his creative efforts bear a striking resemblance to the modern scientific definitions of matter, beginning with the atom and continuing all the way to the vibrating threads of string theory. Furthermore, many of the Dogon words, symbols, and rituals used to describe the structure of matter are quite similar to those found in the myths of ancient Egypt and in the daily rituals of Judaism. For example, the modern scientific depiction of the informed universe as a black hole is identical to Amma's Egg of the Dogon and the Egyptian Benben Stone. The Science of the Dogonoffers a case-by-case comparison of Dogon descriptions and drawings to corresponding scientific definitions and diagrams from authors like Stephen Hawking and Brian Greene, then extends this analysis to the counterparts of these symbols in both the ancient Egyptian and Hebrew religions. What is ultimately revealed is the scientific basis for the language of the Egyptian hieroglyphs, which was deliberately encoded to prevent the knowledge of these concepts from falling into the hands of all but the highest members of the Egyptian priesthood. The Science of the Dogonalso offers compelling new interpretations for many of the most familiar Egyptian symbols, such as the pyramid and the scarab, and presents new explanations for the origins of religiously charged words such as Jehovah and Satan.… (more)

Sacred Symbols of the Dogon: The Key to Advanced Science in the Ancient Egyptian Hieroglyphs by Laird Scranton
Before the Pharaohs: Egypt's Mysterious Prehistory by Edward F. Malkowski
The Egypt Code by Robert Bauval
The Giza Power Plant : Technologies of Ancient Egypt by Christopher Dunn
The land of Osiris : an introduction to Khemitology by Stephen S. Mehler
26 more
Advanced Civilizations of Prehistoric America: The Lost Kingdoms of the Adena, Hopewell, Mississippians, and Anasazi by Frank Joseph
Technology of the Gods: The Incredible Sciences of the Ancients by David Hatcher Childress
Seed of knowledge, stone of plenty : understanding the lost technology of the megalith builders by John Burke
The Sirius Mystery: New Scientific Evidence of Alien Contact 5,000 Years Ago by Robert Temple
Civilization one : the world is not as you thought it was by Christopher Knight, 1950-
Beneath the pyramids : Egypt's greatest secret uncovered by Andrew Collins, 1957-
Earth under fire : humanity's survival of the Ice Age by Paul A. LaViolette
Serpent in the sky : the high wisdom of ancient Egypt by John Anthony. West
Ancient Egypt 39,000 BCE: The History, Technology, and Philosophy of Civilization X by Edward F. Malkowski
Maps of the ancient sea kings; evidence of advanced civilization in the ice age. by Charles H. Hapgood
Atlantis, Dwelling Place of the Gods by Henriette Mertz
Forgotten civilization : the role of solar outbursts in our past and future by Robert M. Schoch
The Velikovsky heresies : worlds in collision and ancient catastrophes revisited by Laird Scranton, 1953-
Lost technologies of ancient Egypt : advanced engineering in the temples of the pharaohs by Christopher Dunn, 1946-
The Mystery Of The Olmecs by David Hatcher Childress
Tutankhamen: Anenesim, Atenism and Egyptian Monotheism by Ernest A Wallis Budge
Voyages of the Pyramid Builders: The True Origins of the Pyramids from Lost Egypt to Ancient America by Robert M. Schoch
The Message of the Sphinx: A Quest for the Hidden Legacy of Mankind by Graham Hancock
Oedipus and Akhnaton: myth and history. by Immanuel Velikovsky, 1895-1979
The Sphinx mystery : the forgotten origins of the sanctuary of Anubis by Robert K. G. Temple
Lost star of myth and time by Walter Cruttenden
The Lost Civilizations of the Stone Age by Richard Rudgley
Cataclysm! : compelling evidence of a cosmic catastrophe in 9500 B.C. by D. S. Allan
Voices of the rocks : a scientist looks at catastrophes and ancient civilizations by Robert M. Schoch
The Cygnus mystery : unlocking the ancient secret of life's origins in the cosmos by Andrew Collins, 1957-
The dimensions of paradise : the proportions and symbolic numbers of ancient cosmology by John F. Michell
Fewer