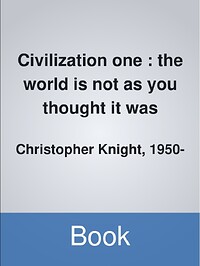 Civilization one : the world is not as you thought it was

This is the amazing story of how a quest to try to crack the mystery of the Megalithic Yard - an ancient unit of linear measurement - led to the discovery of compelling evidence pointing to the existence of an unknown, highly advanced culture which was the precursor to the earliest known civilizations such as the Sumerians and the Egyptians. There must have been a Civilization One. Knight and Butler reveal the secrets of an extraordinary integrated measuring system which might have been lost to the world for ever. It was a system, far more advanced than anything used today, which forms the basis of both the Imperial and Metric measure systems These ancient scientists understood the dimensions, motions and relationships of the Earth, Moon and Sun - they measured the solar system and even understood how the speed of light was integrated into the movements of our planet. Their conclusions fly in the face of everything that we thought we knew about the origins of the modern world - but the evidence is incontrovertible.And the implications of these revelations go far beyond the fascination of the discovery of a 'super-science' of prehistory; they indicate a grand plan which will have far reaching theological ramifications… (more)

Civilization One: The World is Not as You Thought It Was by Christopher Knight (Paperback)

Before the Pharaohs: Egypt's Mysterious Prehistory by Edward F. Malkowski
The Atlantis Blueprint: Unlocking the Ancient Mysteries of a Long-Lost Civilization by Colin Wilson
The Hiram Key: Pharaohs, Freemasons and the Discovery of the Secret Scrolls of Jesus by Christopher Knight
Uriel's Machine: Uncovering the Secrets of Stonehenge, Noah's Flood and the Dawn of Civilization by Christopher Knight
The Cygnus mystery : unlocking the ancient secret of life's origins in the cosmos by Andrew Collins, 1957-
17 more
The Mystery Of The Olmecs by David Hatcher Childress
The Egypt Code by Robert Bauval
Fingerprints Of The Gods: The Evidence of Earth's Lost Civilization by Graham Hancock
Beneath the pyramids : Egypt's greatest secret uncovered by Andrew Collins, 1957-
Heaven's mirror : quest for the lost civilization by Graham Hancock
The path of the Pole by Charles H. Hapgood
Forgotten civilization : the role of solar outbursts in our past and future by Robert M. Schoch
Maps of the ancient sea kings; evidence of advanced civilization in the ice age. by Charles H. Hapgood
Voices of the rocks : a scientist looks at catastrophes and ancient civilizations by Robert M. Schoch
When time began by Zecharia Sitchin
The dream culture of the Neanderthals : guardians of the ancient wisdom by Stan Gooch
Advanced Civilizations of Prehistoric America: The Lost Kingdoms of the Adena, Hopewell, Mississippians, and Anasazi by Frank Joseph
Voyages of the Pyramid Builders: The True Origins of the Pyramids from Lost Egypt to Ancient America by Robert M. Schoch
The lost continent of Mu by James Churchward, 1852-1936
The Giza Power Plant : Technologies of Ancient Egypt by Christopher Dunn
Lost star of myth and time by Walter Cruttenden
The children of Mu, by James Churchward, 1852-1936
Fewer