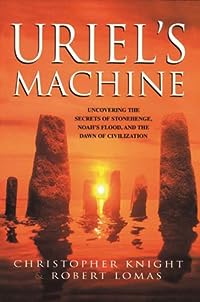 Uriel's Machine: Uncovering the Secrets of Stonehenge, Noah's Flood and the Dawn of Civilization

Modern scientific investigations show that Earth has been hit many times by objects such as comets and meteorites. Laboratory work on comet impact effects demonstrates that comets could cause tidal waves to exceed three miles tall and near 400 miles per hour. In the last 10,000 years, there have been two impacts of such proportion: a seven-fold impact into all the world's oceans around 7640 B.C., and a single impact into the Mediterranean Sea about 3150 B.C., the time of Noah's Flood. Uriel's Machine proves ancient Europeans not only survived the 7640 B.C. flood, but developed a highly advanced civilization dedicated to predicting and preparing for future meteoric impacts. Building an international network of sophisticated astronomical observatories, these ancient astronomers created accurate solar, lunar, and planetary calendars, measured the diameter of the Earth, and precisely predicted comet collisions years in advance. This was the true purpose of megalithic structures such as Stonehenge. In 3150 B.C., the ancients' predictions proved true, and their device -- Uriel's Machine -- allowed the reconstruction of civilization in a shattered world. Uriel's Machine also presents evidence that: -There was a single global language on Earth -A single female was a common ancestor to all living humans -Angels bred with human women to create The Watchers, giant half-human beings -The oral tradition of Freemasonry records real events A fascinating study of humankind's past, present, and future, Uriel's Machine proves the world was indeed flooded, but survived wholly due to these ancient Europeans, their heavenly knowledge, and one remarkable machine.… (more)

LibraryThing member DinadansFriend
A worthy successor to Immanuel Velikovsky, this team has concocted a rich stew of the half-baked and sinister. I love a good conspiracy theory, and this one has thrown in an interesting architectural tour of a Scottish folly. Worth the read, but don't trust it one little bit!
4 more
LibraryThing member RamtopsDweller
A bad book.
Don't trust anything they write about archaeology or geology (or probably
anything else) until you check it for yourself in a reputable source.
They get dates wrong, facts wrong, show that they don't actually know the
material, etc. For instance, they ascribe the Scottish tsunami to a comet
(one or more of 7) that they claim caused
worldwide tsunami in 7640 BC. This in fact was caused by the second
Storegga submarine landslide which occurred on the continental slope off
the coast of western Norway, extending out into the Norwegian Basin and
was almost certainly caused by an earthquake.
They write nonsense like "The earliest known buildings in the world are
the megalithic structures of Europe. They are 1,000 years older than the
cities of Sumer." But later they mention Catalhoyuk and state that it
flourished between 7000 and 6000 BC. And of course there is Jericho, with
walls and towers dating back to between 8000 and 7000 B.C.

Page 60:
"In North Wales, beds of sand and gravel with geologically recent sea
shells can be found on mountains such as Moel Tryfan which is over 400
metres above sea level, showing that North Wales was briefly covered by
sea water at a point in the recent past."

Obvious nonsense, but some people might believe it. They get it from a
1971 Creationist book, which in turn quotes (although we aren't provided
with a quote) Geikie, A, Textbook of Geology', with no date. Sir Archibald
Geikie's book cited here might be "A Class-Book of Geology", 3rd edition,
MacMillan and Co.:
London, 1892 (p.179-180).
et's look at something a bit more recent:
The Need for Earth Heritage Conservation by the UK's Joint Nature
Conservation Committee wrote about this:

"Moel Tryfan, Gwynedd. This is a historically important site, 400 metres
above sea level, that consists of sand and gravel containing fossils of
sea-shells. It was cited as evidence for the biblical flood by the
Diluvialists. Subsequently it was interpreted as a glacial deposit carried
from the sea bed by an Irish Sea ice sheet during the last ice age, about
23,000 years ago. This has a bearing on the dimensions of the last Irish
Sea ice sheet, the extent to which it may have depressed the Earth's
crust, and the degree of crustal 'rebound' after glaciation. It is a
subject of ongoing research."

There are many more errors in the book. For instance, there were no
'grooved ware people', the Ainu are clearly not Caucasian (genetic
evidence shows they are related to their neighbours), agriculture is older
than Lomas and Knight state, their comments on Stonehenge seem to include
elements they've made up, etc. A classic example of bad science.… (more)
LibraryThing member wyvernfriend
For me this one has a mixed feeling there's shedloads of maths in it but not as much as in others of that ilk. There's leaps of faith, but again not as many, it still left me sometimes with a feeling that it's a too symplistic view of the world but also left me wondering if some of it could be true.
LibraryThing member davis22star
It's terrific when a non fiction book reads like fiction, especially good fiction. This book reads like a mystery and a thriller and although the ideas presented are mostly speculative, they are also eminently plausible.
LibraryThing member miketroll
This is a fascinating exploration of prehistoric (indeed, antediluvian) technology. Mainstream historians still hold that modern civilisation represents the peak of human development since our emergence from the Stone Age 5,000 years ago. They may feel uncomfortable with the premise that human civilisation was already well advanced at the end of the last Ice Age. However, the end of the Ice Age itself, through the melting of icecaps and global flooding (remember Noah?), brought global catastrophe and historic discontinuity.

Knight and Lomas, themselves engineers by training, examine well known artefacts of the neolithic age, including Stonehenge, and draw some astonishing conclusions as to their practical purpose. Moreover, by a process of reverse engineering, they are able to show how megalithic monuments could be used not only to chart the seasons but also to provide astoundingly accurate standard measures of length used all over Europe.… (more)
Fewer

Uriel's machine : the ancient origins of science by Christopher Knight, 1950-

The Atlantis Blueprint: Unlocking the Ancient Mysteries of a Long-Lost Civilization by Colin Wilson
The Sign and the Seal: The Quest for the Lost Ark of the Covenant by Graham Hancock
Lost secrets of the sacred ark : amazing revelations of the incredible power of gold by Laurence Gardner
Fingerprints Of The Gods: The Evidence of Earth's Lost Civilization by Graham Hancock
The Message of the Sphinx: A Quest for the Hidden Legacy of Mankind by Graham Hancock
10 more
Rosslyn, guardian of the secrets of the Holy Grail by Tim Wallace-Murphy
Bloodline of the Holy Grail: The Hidden Lineage of Jesus Revealed by Laurence Gardner
Heaven's mirror : quest for the lost civilization by Graham Hancock
Earth under fire : humanity's survival of the Ice Age by Paul A. LaViolette
Civilization one : the world is not as you thought it was by Christopher Knight, 1950-
The Sword and the Grail: Of the Grail and the Templars and a True Discovery of America by Andrew Sinclair
Ancient Traces Mysteries in Ancient and Early History by Michael Baigent
The Knights Templar in the New World : how Henry Sinclair brought the Grail to Acadia by William F. Mann
When time began by Zecharia Sitchin
The Sirius Mystery: New Scientific Evidence of Alien Contact 5,000 Years Ago by Robert Temple
Fewer