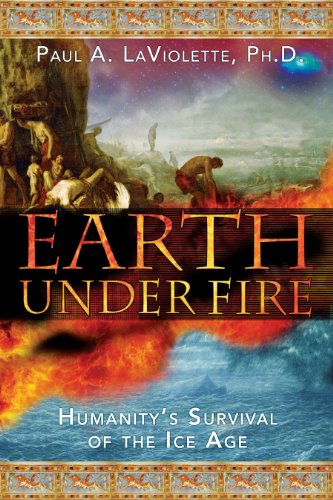 Earth under fire : humanity's survival of the Ice Age

by Paul A. LaViolette

An investigation of the connection between ancient world catastrophe myths and modern scientific evidence of a galactic destruction cycle * Provides scientific evidence of past Earth-wide catastrophes and their galactic superwave origins * Decodes the ancient message encrypted in the zodiac constellations and symbolism of the Sphinx * Describes how explosions of our Galaxy's core pose a threat to humanity in the future Many ancient myths from around the world tell of catastrophic destruction by fire and flood. These ubiquitous legends are so extreme that they are often dismissed as imaginative exaggerations. In Earth Under Fire, Paul LaViolette connects these "myths" to recent scientific findings in astronomy, geology, and archaeology to reconstruct the details of prehistoric global disasters and to explain how similar tragedies could recur in the near future. Compelled by his decryption of an ancient warning hidden in zodiac constellation lore, LaViolette worked with information from many scientific sources, including astronomical observations, polar ice core measurements, and other geological data, to confirm that our Galaxy's core exploded near the end of the last ice age. This explosion unleashed a barrage of cosmic rays and enveloped the solar system in a dense nebula, which led to periods of persistent darkness, frigid cold, severe solar storms, searing heat, and mountainous floods that plagued mankind for many generations. Linking his scientific findings to details preserved in the myths and monuments of ancient civilizations, he demonstrates how past civilizations accurately recorded the causes of these cataclysmic events, knowledge of which may be crucial for the human race to survive the next catastrophic superwave cycle. This information reveals the intelligence and ingenuity of our ancestors who, when faced with extinction, found the means to warn us that the apocalypse that destroyed them could occur once again.… (more)

The cycle of cosmic catastrophes : flood, fire, and famine in the history of civilization by Richard B. Firestone
Atlantis beneath the ice : the fate of the lost continent by Rand Flem-Ath
Signs in the Sky: Prophecies for the birth of a New Age by Adrian Gilbert
The path of the pole by Charles H. Hapgood
The Cygnus mystery : unlocking the ancient secret of life's origins in the cosmos by Andrew Collins, 1957-
25 more
Lost star of myth and time by Walter Cruttenden
Oedipus and Akhnaton: myth and history. by Immanuel Velikovsky, 1895-1979
Earth in upheaval. by Immanuel Velikovsky, 1895-1979
Worlds in Collion by Immanuel Velikovsky
Voices of the rocks : a scientist looks at catastrophes and ancient civilizations by Robert M. Schoch
Fingerprints Of The Gods: The Evidence of Earth's Lost Civilization by Graham Hancock
The lost science of measuring the earth : discovering the sacred geometry of the ancients by Robin (Robin F.) Heath
Atlantis of the West: The Case For Britain's Drowned Megalithic Civilization by Paul Dunbavin
The end of Eden : the comet that changed civilization by Graham Phillips
Before the Pharaohs: Egypt's Mysterious Prehistory by Edward F. Malkowski
Voyages of the Pyramid Builders: The True Origins of the Pyramids from Lost Egypt to Ancient America by Robert M. Schoch
The Egypt Code by Robert Bauval
The dimensions of paradise : the proportions and symbolic numbers of ancient cosmology by John F. Michell
The stones of Atlantis by David Zink
Forgotten civilization : the role of solar outbursts in our past and future by Robert M. Schoch
Cataclysm! : compelling evidence of a cosmic catastrophe in 9500 B.C. by D. S. Allan
Secrets of the Lost Races: New Discoveries of Advanced Technology in Ancient Civilizations by Rene Noorbergen
Gods of the Cataclysm: A revolutionary investigation of man and his gods before and after the Great Cataclysm by Hugh Fox
The Hiram Key: Pharaohs, Freemasons and the Discovery of the Secret Scrolls of Jesus by Christopher Knight
Uriel's machine : the ancient origins of science by Christopher Knight, 1950-
Atlantis, The Antediluvian World by Ignatius Donnelly
Genes, giants, monsters, and men : the surviving elites of the cosmic war and their hidden agenda. by Joseph P. Farrell
Peoples of the sea by Immanuel Velikovsky
Beneath the pyramids : Egypt's greatest secret uncovered by Andrew Collins, 1957-
The Science of the Dogon: Decoding the African Mystery Tradition by Laird Scranton
Fewer