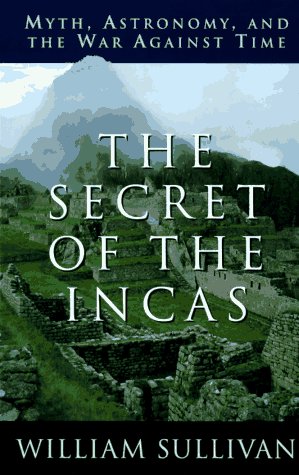 The secret of the Incas : myth, astronomy, and the war against time

"'This book is the story of an experiment,' to quote the author (p. 12). Focuses on myth as the key to understanding the Incas' past. Many conclusions differ from those of standard scholarly literature. Some examples that run counter to orthodox views on Andean peoples are the notion that Andean myth recounts significant precessional events; the view that the three worlds of Andean cosmology were understood, on one level, as locations on the celestial sphere, united by the Milky Way; and the idea that Andean peoples not only had names for all the planets visible to the unassisted eye, but also associated them with important deities. Uses ethnoastronomical studies of Gary Urton and R. Tom Zuidema"--Handbook of Latin American Studies, v. 58.

Lost city of the Incas, the story of Machu Picchu and its builders. by Hiram Bingham, 1875-
The incredible Incas and their timeless land by Loren McIntyre
Beneath the pyramids : Egypt's greatest secret uncovered by Andrew Collins, 1957-
History of the conquest of Peru, with a preliminary view of the civilization of the Incas. by William Hickling Prescott, 1796-1859
The Everyday Life of the Ancient Incas by Dr. David M. Jones
25 more
Voyages of the Pyramid Builders: The True Origins of the Pyramids from Lost Egypt to Ancient America by Robert M. Schoch
Before Columbus; links between the Old World and ancient America, by Cyrus Herzl Gordon, 1908-
Earth under fire : humanity's survival of the Ice Age by Paul A. LaViolette
The Incas and their ancestors : the archaeology of Peru by Michael Edward Moseley
The Incas; the royal commentaries of the Inca, Garcilaso de la Vega, 1539-1616. by Garcilaso de la Vega, 1539-1616
The path of the pole by Charles H. Hapgood
The cycle of cosmic catastrophes : flood, fire, and famine in the history of civilization by Richard B. Firestone
Stolen continents : the Americas through Indian eyes since 1492 by Ronald Wright
The ancient civilizations of Peru by John Alden Mason
The Incas by Terence N. D'Altroy
A forest of kings : the untold story of the ancient Maya by Linda Schele
The Atlantis Blueprint: Unlocking the Ancient Mysteries of a Long-Lost Civilization by Colin Wilson
Lines to the mountain gods : Nazca and the mysteries of Peru by Evan Hadingham
Heaven's mirror : quest for the lost civilization by Graham Hancock
Serpent in the sky : the high wisdom of ancient Egypt by John Anthony. West
Peoples of the sea by Immanuel Velikovsky
Forgotten civilization : the role of solar outbursts in our past and future by Robert M. Schoch
The end of Eden : the comet that changed civilization by Graham Phillips
The Giza Power Plant : Technologies of Ancient Egypt by Christopher Dunn
Maps of the ancient sea kings; evidence of advanced civilization in the ice age. by Charles H. Hapgood
Voices of the rocks : a scientist looks at catastrophes and ancient civilizations by Robert M. Schoch
America B.C. : ancient settlers in the New World by Barry Fell
Skywatchers by Anthony F. Aveni
Megaliths, myths, and men: An introduction to astro-archaeology (Harper colophon books, CN 578) by Peter Lancaster Brown
The Cygnus mystery : unlocking the ancient secret of life's origins in the cosmos by Andrew Collins, 1957-
Fewer