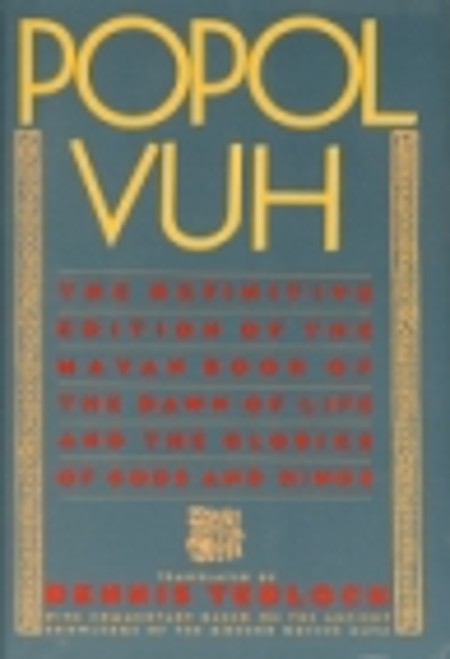 Popol vuh : the definitive edition of the Mayan book of the dawn of life and the glories of gods and kings

Popol Vuh, the Quiché Mayan book of creation, is not only the most important text in the native languages of the Americas, it is also an extraordinary document of the human imagination. It begins with the deeds of Mayan gods in the darkness of a primeval sea and ends with the radiant splendor of the Mayan lords who founded the Quiché kingdom in the Guatemalan highlands. Originally written in Mayan hieroglyphs, it was transcribed into the Roman alphabet in the sixteenth century. This new edition of Dennis Tedlock's unabridged, widely praised translation includes new notes and commentary, newly translated passages, newly deciphered hieroglyphs, and over forty new illustrations.

LibraryThing member BayardUS
Popol Vuh-
The Mayan creation myths are not just entertaining to read, but provide a fascinating look at Mayan culture and history as well, through the dimly remembered prehistory of the people up until their conquest by the Spanish. Popol Vuh doesn’t merely sketch out a story of creation that occurred in the distant past, it links that creation all the way through the time of the European invasion of the Americas and the effective end of Mayan supremacy; it’s as if the Prose and Poetic Eddas were written while Ragnarok was happening, or if the Greek/Roman myth cycle lasted until the Pantheon was overthrown by the next generation of gods. These mythologies had a story to explain their end, but Popol Vuh is a mythology that lived to see its end.

Popol Vuh is especially interesting as a mythological text because it presents us with gods who are fallible from the beginning. It takes numerous attempts before they successfully make humanity, their failures sometimes surviving in other forms (animals) and other times just falling apart into dirt and mud (nicely illustrating the life lesson that sometimes mistakes can actually be productive, but sometimes they’re just a waste of your time and effort. Too many texts emphasize the first part while failing to grasp the second). If there’s a story where one of the Greek pantheon goes up to Hephaestus and says “please make me this thing” and Hephaestus answers “sorry, I have no idea how to do that” I’m not familiar with it. The Mayan gods are not all powerful either, and much of the first three parts of the text concern the efforts of the gods to outsmart the brutal lords of the underworld using their wits instead of overwhelming force. There is no Zeus equivalent here to thrash the enemies of the pantheon, instead creation and existence are a struggle even for the gods, who can lose contests and die when things don’t go their way. Man is presented as far closer to the divine in the Mayan myths than in most other myth systems, as man serves as the “knower” as well as the “recorder.” It is through man that the acts of the divine can be transcribed and the world understood.

There are numerous parallels in the Popol Vuh to other myths and religions- there’s a great flood, for instance, there’s a point where the divine saviors die and are reborn (though after five days, not three) and are more powerful than ever after death, there is a Babel-like segment where the gods fear the power of man and so they handicap them (though by reducing their sight, not by confusing their language), there’s even a Prometheus character here. The Mayan myths aren’t just lesser shadows of the Western myths, however, as throughout the text the Mayan myths feel alive and visceral in a way that I haven’t seen in a very long time. I read Ovid’s Metamorphoses earlier in the year, and though that is a masterfully constructed and excellently written text, it felt more like a literary endeavor than a work of passionate belief. Perhaps Ovid believed in the Roman gods, perhaps he believed in them quite strongly, but it is clear to me that he doesn’t see them in every sunrise, beneath every rock, living in every shadow and animal and house and ear of corn like the author of the Popol Vuh did. If you like reading mythology there are few if any books I would recommend more highly than the Popol Vuh, which is why I’m giving it five stars (only the second 5-star ranking I’ve given out of the 70 books I’ve read so far this year).

The Dennis Tedlock edition is wonderful. The extensive introduction summarizes the events of the main text, so you never have trouble understanding what’s going on. The extensive notes and glossary mean that not only will you be able to look up anything that you don’t understand or don’t remember, but you can also read about the linguistic nuances of the translation and see an analysis of how the Popol Vuh relates to the Mayan calendar. Finally the book is embellished by many pictures and images taken from Mayan artifacts and art, which help to make the story more vivid and the text feel more vital. I could not name a single way in which the text could be made better.

P.S. I have a theory that Tohil is a death god that somehow survived the earlier age and escaped the underworld slaughter done by Hunahpu and Xbalanque, given that Tohil is first introduced by a Xibalban messenger. Just an idea, but fun to think about.
… (more)
10 more
LibraryThing member lilithcat
More than a mere translation, Tedlock also provides a full introduction and commentaries on the text, which was originally writtenin Mayan hieroglyphs and transcribed into the Spanish alphabet in the 16th-century. Heavily annotated.
LibraryThing member LTFL_JMLS
got me in the mood to see Chichen Itza. Didn't actually read it all, though.
LibraryThing member imnotsatan
Despite what other reviewers have said, I would like to point out that this is the Christenson translation, not Tedlock (though it is based on his work). That being said, this is my preferred translation; it's clear and avoids too much translatorese. It's well annotated and generally well researched.
LibraryThing member simonmagus
this is the real thing, authentic pre-columbian mayan mythology. of course you already know that if you're reading this. if you don't know that already, get the book in any translation and check it out.
LibraryThing member gregory_gwen
got me in the mood to see Chichen Itza. Didn't actually read it all, though.
LibraryThing member albertgoldfain
Both biblical and atmospheric verse in a great creation/origin story. I now get the references to Xibalba in Aronofsky's underappreciated film "The Fountain".
LibraryThing member jasonsteven1212
This was a wonderful read. Not only are these tales deeply allegorical, insightful and truthful but amusing and facinating. I read this three time and then transcribed the entire work.
LibraryThing member erinfanning
Highly recommended for anyone with an interest in mythology or Mesoamerican literature.
LibraryThing member Petroglyph
The Popol Vuh is a grand mytho-historical cycle, a reflection of an oral history, as told by the K’iche’, one branch of the Mayan peoples. The cycle starts with a creation myth and then continues with the Gods’ repeated failures to create humans, a series of Trickster Twins and their exploits among the Gods and in the underworld of Xibalba, the eventual creation of humans, and an increasingly historical listing of Mayan and allied communities and leaders, down to the eventual Conquest by the Spanish.

For anyone familiar with other grand mythological cycles (Greek, Norse, Hebrew), these stories follow a familiar pattern: a deep time that is highly allegorical and full of symbolism and larger-than-life heroes, and that becomes progressively anchored in history as the material approaches the present. As such the Popol Vuh reads like a distinctively Native-American variation on a familiar theme: a standardized history of the people, whose cultural practices have roots in deep time and the forces that shape the universe. Good stuff!

The edition I read was prepared and translated by Dennis Tedlock, and it is doubtlessly awe-inspiring. While the text is presented as a smooth, nicely-flowing narrative, the endnotes (whose pagecount surpasses that of the actual Popol Vuh) make apparent the translation difficulties and the cultural references, and provide insight in many of these items’ history in previous editions. Tedlock defends his editorial choices, compares editions and includes the necessary cultural background for an audience of laypeople and specialists. The whole thing must have been a massive undertaking, and Tedlock’s scrupulousness is admirable.

An exemplary edition of a fascinating cultural narrative belonging to a civilization now conquered and largely erased.… (more)
LibraryThing member Michael.Rimmer
The introduction and notes in the edition I read (ISBN 0671617710 ) were an excellent guide to a culture I am fairly ignorant of. Translator Dennis Tedlock did an great job at explaining the nuances of the cultural significance of the myths.

I found it particularly interesting that most of the stories in the Popol Vuh can be linked to specific astronomical/calendrical events. An incredibly complex and sophisticated world-view.

The journeys of the hero-gods into the underworld realm of Xibalba were both funny and horrifyingly grotesque at the same time. Though probably not as horrifying as the semi-historical section towards the end in which the mythic origins of human sacrifice are explained.

Tedlock very generously acknowledges the help he received from contemporary Quiché Maya practitioners, particularly Andrés Xiloj who initiated him as Daykeeper, one who is able to perform divinations using the 260-day ritual calendar of the Maya.… (more)
Fewer

A forest of kings : the untold story of the ancient Maya by Linda Schele
Maya cosmos : three thousand years on the shaman's path by David A. Freidel
The ancient Maya. by Sylvanus Griswold Morley, 1883-1948.
Breaking the Maya code by Michael D. Coe
The Maya by Michael D. Coe
21 more
The code of kings : the language of seven sacred Maya temples and tombs by Linda Schele
The blood of kings : dynasty and ritual in Maya art by Linda Schele
The world of the ancient Maya by John S. Henderson
Yucatan before and after the conquest by Diego de Landa
Chronicle of the Maya kings and queens : deciphering the dynasties of the ancient Maya by Simon Martin
Mexico by Michael D. Coe
Maya, the riddle and rediscovery of a lost civilization by Charles Gallenkamp
The mysterious Maya by George E. Stuart
Rise and fall of the Maya Civilzation by J. E. Thompson
The art of Mesoamerica : from Olmec to Aztec by Mary Ellen Miller
Tikal, a handbook of the ancient Maya ruins, with a guide map by William R. Coe
The conquest of New Spain by Bernal Diaz del Castillo, 1496-1584
Mexican and Central American mythology. by Irene. Nicholson
An album of Maya architecture by Tatiana Proskouriakoff
The broken spears : the Aztec account of the Conquest of Mexico by Miguel León Portilla
The Aztecs by Richard F. Townsend
Prehistoric Mesoamerica by Richard E. W. Adams
The Mayan factor : path beyond technology by José Argüelles
The Toltecs, until the fall of Tula by Nigel Davies
Book of the Hopi by Frank Waters
Lost kingdoms of the Maya by Gene S. Stuart
Fewer