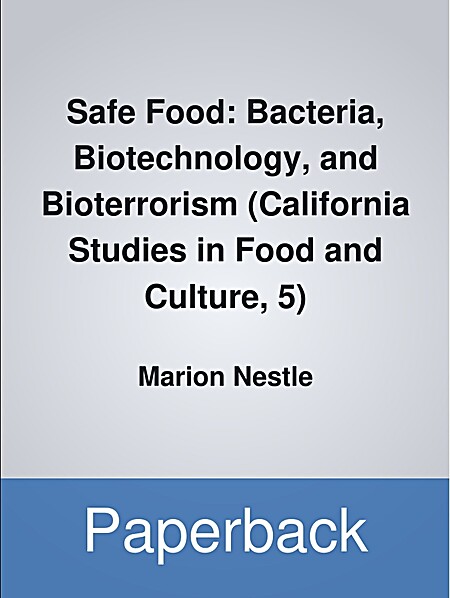 Food safety is a matter of intense public concern, and for good reason. Millions of annual cases of food "poisonings" raise alarm not only about the food served in restaurants and fast-food outlets but also about foods bought in supermarkets. The introduction of genetically modified foods--immediately dubbed "Frankenfoods"--only adds to the general sense of unease. Finally, the events of September 11, 2001, heightened fears by exposing the vulnerability of food and water supplies to attacks by bioterrorists. How concerned should we be about such problems? Who is responsible for preventing them? Who benefits from ignoring them? Who decides? Marion Nestle, author of the critically acclaimed Food Politics, argues that ensuring safe food involves more than washing hands or cooking food to higher temperatures. It involves politics. When it comes to food safety, billions of dollars are at stake, and industry, government, and consumers collide over issues of values, economics, and political power--and not always in the public interest. Although the debates may appear to be about science, Nestle maintains that they really are about control: Who decides when a food is safe? She demonstrates how powerful food industries oppose safety regulations, deny accountability, and blame consumers when something goes wrong, and how century-old laws for ensuring food safety no longer protect our food supply. Accessible, informed, and even-handed, Safe Food is for anyone who cares how food is produced and wants to know more about the real issues underlying today's headlines.… (more)

What to Eat by Marion Nestle
Kitchen Mysteries: Revealing the Science of Cooking (Arts and Traditions of the Table: Perspectives on Culinary History) by Hervé This
The New Portuguese Table: Exciting Flavors from Europe's Western Coast by David Leite
Salted: A Manifesto on the World's Most Essential Mineral, with Recipes by Mark Bitterman
The Oxford Companion to American Food and Drink (Oxford Companions) by Andrew F. Smith