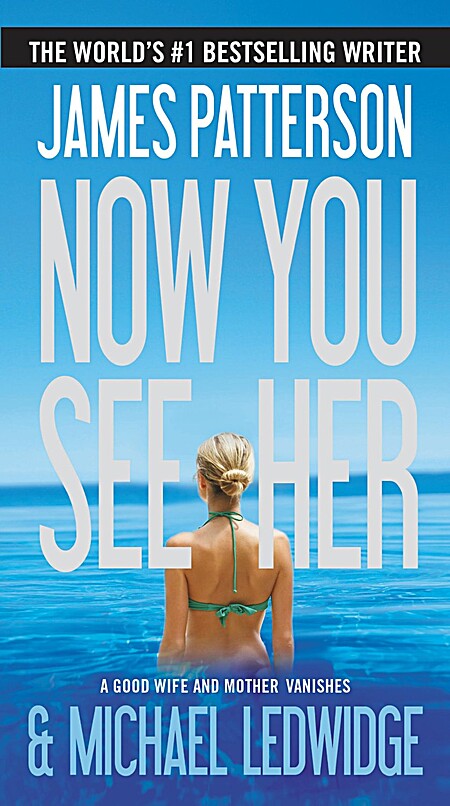 Now You See Her [Hardcover]

A successful lawyer and loving mother, Nina Bloom would do anything to protect the life she's built in New York--including lying to everyone, even her daughter, about her past. But when an innocent man is framed for murder, she knows that she can't let him pay for the real killer's crimes. Nina's secret life began 18 years ago. She had looks to die for, a handsome police-officer husband, and a carefree life in Key West. When she learned she was pregnant with their first child, her happiness was almost overwhelming. But Nina's world is shattered when she unearths a terrible secret that causes her to run for her life and change her identity. Now, years later, Nina risks everything she's earned to return to Florida and confront the murderous evil she fled.… (more)

LibraryThing member redmore
What can you say about a James Patterson book. Everyone already knows he is not going to let you down. I will just say yup he did it again.
19 more
LibraryThing member cmeilink
Nina Bloom, mother to a beautiful teenager, Emma, and rising star in a major law office, has a secret...a few of them, in fact, and these secrets could send her whole world crashing to the ground.

When a young Jeanine traveled to Key West for a few days of fun in the sun, she never dreamed that one careless moment could change her life forever. With the help of a Key West policeman, Peter Fournier, the incident was covered up and she found herself falling in love with the handsome officer, marrying him and living in idyllic Key West. When Jeanine discovers some unpleasant truths about her husband, she makes the decision to leave him and Key West forever. On her run from her husband, she encounters the Jump Killer and barely escapes alive.

Now living as Nina Bloom and trying to bury her past, a twist of fate lands her with a case that causes her to revisit her past and Key West once again and to chance a showdown with a husband that thought she was dead and a killer that now had a second chance to kill her.

Read it from start to finish with only a snack or two in between. A good read from Patterson & Ledwidge.… (more)
LibraryThing member tabitha6
I really enjoyed this book. It had all of the typical Patterson elements. The story behind the life of a desperate woman was exciting and tragic. I would recommend this book to anyone who delights in the mystery.
LibraryThing member wcath
A great thrill ride with lots and lots of twists!
LibraryThing member bitsy08
I don't know about anyone else but every time I see a famous author "backing off" the writing and getting someone else to co-author, I'm pretty sure the book will not be up to snuff. THIS is not James Patterson. Perhaps Mr.Ledwidge did more of the writing than Patterson. This isn't up to Patterson standards. It's more a quick, so-so read.… (more)
LibraryThing member DogDayz
This is one of the first books, at least in a long time, I've read within two sits/readings (and that's unusual for me). It was pretty much a page turner and there were always events happening that made you want to find out more. This is finally the type of book I've been looking for for a while. I will definitely have to read more of his books. This was my first James Patterson read.… (more)
LibraryThing member cwaldrum
James Patterson is probably one of my most favorite authors. For a few reasons that I shall bore share with you:
1. The man is a frickin' genius with writing thrillers. It doesn't matter if it's Alex Cross, the Women's Murder Club or the random everyday psycho he's awesome.

2. He tag teams with other writers (someday please pick me!) so that the work is always told fresh and liberating. Helps boost the careers of said writers too.

3. He's to the point. My most favorite part of his books is how quickly he gets to the point. There are descriptions but not enough (ahem Anne Rice) to make you skip six pages about the flowers in the garden.

Now You See Her is no exception. A masterfully woven tale of a woman on the run from a husband with deadly secrets. A daughter hidden from the world she should have been born into. A serial killer allowing an innocent to take the rap for his crimes. I sat on the edge of my seat with the twists and possible turns and was not disappointed with the ending. I only had one minor detail that kind of popped out at me. The serial killers eye: where was the patch? Go read it, borrow it, steal it (then return it) and see if you find this discrepancy as well.… (more)
LibraryThing member TomWheaton
I really enjoyed this book. It was a real page-turner right from the start. It also had many unexpected twist throughout the book.
LibraryThing member gma2lana
I was entertained by this book, so much in fact, that I read it in a day. I had been in a book funk, and as usual, Patterson helped me back into my joy of reading.
LibraryThing member DavidLErickson
Of all the Patterson novels I've read, these is easily among the top 3.
Jeanine, a young soon to be college grad on summer break, catches her boyfriend with her best friend, steals his car and apparently to her, kills a homeless man. The cop he arrives on the scene covers it up and ends up marrying her. Little does she know who or what he really is.

The story jumps through one incredible scene after another, but even though you know in the end she will confront the evil she must overcome, the trip is a roller coaster ride that rarely gives a glimpse of whats to come. Patterson delivers an uncompromising story filled with an interesting array of characters.

True to form, there is the last possible second rescue that is the hallmark of TV adventure tales (for once I'd like to see the bomb go off or the rescue done when there's a small amount of time remaining, but that's me.

All in all, A great read.… (more)
LibraryThing member LivelyLady
Somehow Patterson has become more palatible in the audio state then visual. This six disc reading was pretty good. A woman leaves her psychopath husband, who is a policeman in Key West,. She disappears and fakes her own death. He finds her, accidentally, only now it is 16 years later and he is the police chief. The story is somewhat formulaeic, as Patterson's stories have evolved. Glad I didn't read the book.… (more)
LibraryThing member Ocean_Mist
What an incredible story! Loved it! A great thriller that kept me at the edge of my seat!
LibraryThing member HenriMoreaux
'Now You See Her' is a stand alone novel not part of any of Patterson's series.

Whilst it initially appears longer than his normal length at 487 pages, it is actually 487 pages of large font, double spaced with sizeable margins text which in reading time actually felt a little shorter than some of his other books. (This refers to the 2012 Arrow Books edition, ISBN 978-0-099-52532-5).

In terms of the actual plot and writing, it starts firmly and draws you in. You're initially trying to work out who this Nina woman is and what her secret is, and then as things progress you're suddenly wondering what she's gotten into, then rooting for her escape.

The escape part did seem a little far fetched the way she avoids one problem, only to fall into the hands of another problem, then escapes that only to fall yet again into a third problem. Aaaaand then get rescued by the random appearance of a veritable knight in shining armour. I felt this was a little cheesy, thankfully the story picks back up after this short stumble.

More clarity is brought to the short section of stumbling plot towards the end, however I still felt that part of the story somewhat ruined the flow of the book and broke your immersion in the story as you scoffed at how ludicrous it was.

All in all, it's a quick read that will keep you captivated whilst it lasts. It's not going to win any prizes or redefine any literature genres but it is entertaining.… (more)
LibraryThing member diananagy
Great book by James Patterson-not a surprise but I really liked this one. It kept me reading until the end (as all of his do, I know, I Know) But this one was pretty interesting the way it read. I love the way it ends and the beginning started out great. Crazy stuff! Read It! I highly recommend it! And when you get done with it, which you will love, read another of his books. Trust me they are worth it!… (more)
LibraryThing member chrissilu68
Fast read! Great book! Loved the storyline!
LibraryThing member soosthemoose
Enjoyable and fast, easy read. A little far fetched but again enjoyable and believable enough.
LibraryThing member LynnB
Fast-paced, good story, only a few unbelievable moments. This isn't a genre I read regularly. It was a fun read, a real pager turner, but two weeks from now, I won't remember anything about it.
LibraryThing member Carol420
She should have done the right thing and report the accident, but she seizes what appears to be a chance to escape jail time. The effects of this decision linger for decades; the book extends past her fortieth birthday. Jeanine must learn that choices have consequences, sometimes deadly. There are wildly improbable coincidences, and cliff-hanging how-will-she-get-out-of-THIS-one episodes all along the way. It's not really a BAD book; it's just so....predictable.
… (more)
LibraryThing member ChelleBearss
I used to love James Patterson books but ever since he started writing with other authors I have been disappointed. This book was cheesy and predictable. (2*)
LibraryThing member JillNYC
Again surprised by Patterson. This was excellent. I guess I usually don't read his stuff (until recently) because he turns out so many books a year. I figured his work wouldn't be as thought provoking as it is. It kept me on the edge of my seat till the very end!
Fewer