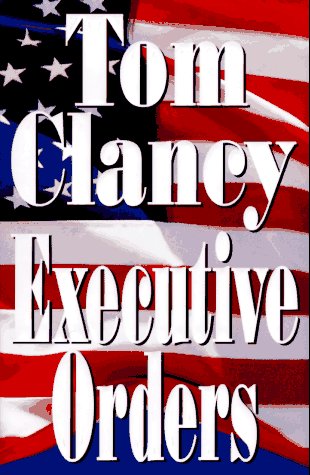 After an airliner crashes into the Capitol, killing the president, Jack Ryan, the vice-president takes over. The novel describes Ryan's campaign to impose a right-wing morality on the U.S. and a new order on the world, the latter accomplished with the aid of high-tech warfare. A sequel to Debt of Honor. Jack Ryan becomes president by sheer accident when the former president, most of Congress, the Cabinet and the Supreme Court are bombed out of existence. Ryan must jump in to discover who did it, all the while contending with the threat of military takeover and covert biological warfare.

LibraryThing member ShelfMonkey
I've never read Tom Clancy before. I've seen the movies, and enjoyed them (THE HUNT FOR RED OCTOBER in particular). But Clancy as a novelist was a new experience.

I suppose I should have seen my overall reaction coming. When Clancy dedicated his book to Ronald Reagan, I had a sneaking suspicion as to where the story would lead.

The story has plenty of pulp promise. What appears to be the entire American government is wiped out in one fell swoop, and it's up to Jack Ryan to become the new president. But Clancy doesn't know when to quit. He adds on layers and layers of subplots, most of which would work by themselves, but only serve here to bloat an already large novel.

Part of the problem is that there is no sympathy created for any character. Every person in Ryan's entourage is decent, hard-working, and completely uninteresting. Any person who doesn't fit in with Clancy's idea of a hero is treated with suspicion and contempt. It might make a difference if ANY character was remotely memorable, but evidently, characterization is not Clancy's strong suit.

I had higher hopes for the action portions of the novel, but alas, I was also disappointed. Pages and pages of technical jargon only prove that Clancy has done his homework. What it doesn't do is advance the plot. Tank warfare may make for entertaining viewing, but they make for deadly dull reading. Particularly if, once again, there is absolutely no empathy created for anyone involved in the actual battles.

And as for the actual backstage look at how the presidency is run? I am reminded of a recent newspaper critique of television's THE WEST WING. It stated (quite accurately, to my mind) that when it comes to drama, the democratic viewpoint is the most dramatically satisfying. It leads to shows such as THE WEST WING, I'LL FLY AWAY, PICKET FENCES, and HOMICIDE. When the republican viewpoint is emphasized in a drama, you get THE A-TEAM and TOUCHED BY AN ANGEL.… (more)
18 more
LibraryThing member jaimelesmaths
My first Tom Clancy book, and I definitely enjoyed it. Until the last 100 pages, that is. Politics is interesting. Meticulous war details are boring. The suspense was well done, and the book referenced earlier events with enough context to allow someone who hadn't read the entire series to get the gist of what happened. Unfortunately, because of the ending, I likely wouldn't reread this book. However, if you're into politics, it's worth a read.… (more)
LibraryThing member sdobie
After most of the top levels of the US government are wiped out, Jack Ryan ends up as president of the US, and has to face both internal and external threats.

By this point in his career, Clancy's books were becoming much more ideological and less interesting, and Executive Orders is quite bloated. A big portion of the book is devoted to an internal terrorism plot that goes nowhere and just fills up pages. The bioterror plot is more interesting, but still not all that plausible. There is still some decent entertainment value, but it would have been better at much less length.… (more)
LibraryThing member reading_fox
Rapid decline. Thanks to a very silly ending in the book before Ryan is now president. with a government to create, China becomes the new enemy introducing biological weapons in order to grab land. Ryan's presidentcy is put to the test, but fortunetly his army has all the latest toys and saves the day. Again.

Despite being huge it lacks the interesting details of former books, and doesn't have the saving grace of taut prose to redeem it.… (more)
LibraryThing member jpsnow
It's impressive when 850+ pages can be called a quick read. This is one of my favorite Clancy novels due to the frantic action and the role of Jack Ryan.
LibraryThing member Lwyrbabe
Can I give a book 100 stars instead of 5? This is my all-time favorite book although I must admit that I now (having read it about 10 times) prefer the audiobook abridged version -- it takes some of the excess military details out.

Readers should not start with this book if they are interested in reading Clancy's Jack Ryan series. They should start with "Hunt for Red October" and move forward. The development of Ryan's character throughout the series is brilliant.… (more)
LibraryThing member Lynngood
A thriller in which Jack Ryan is faced with crushing responsibilities when he becomes the new President of the US after a jumbo jet crashes into the Capitol Building in Washington, leaving the President dead, along with most of the Cabinet and Congress.
LibraryThing member ponsonby
This is one of the better Clancy/Jack Ryan novels, concerned with his coming to grips with an Iran-inspired attack in various forms on America, after he has inadvertently become President. Although there's a lot of improbabilities, it also contains a good deal of fascinating detail about plausible scenarios on bio-warfare and terrorism. As ever the cliff-hanging structure is well arranged and the multiple plot lines handled beautifully (except one, see below). I did skip some of the land/air battle detail in the last 100 or so pages, but others may find that interesting. One noticeable flaw is the backwoodsmen bomb plot which seems to just peter out rather than being an integrated part of the story. The book also totally ignores the contribution which America would probably seek, in the circumstances outlined, from NATO allies. But nonetheless and enjoyable book. The opening part would be more comprehensible to anyone who had read Debt of Honor first as the books are closely linked, more so than others in the Ryan series.… (more)
LibraryThing member santhony
This plot line stretches the imagination, but it is captivating nonetheless. If you are a Clancy fan, you will love this novel.
LibraryThing member barbgarcia1987
This one is also one of my favorites of Mr. Clancy's books. I enjoyed reading it a lot (and often). Do I ever think something like this would happen, no, but this is fiction. The author takes an idea and runs with it. I think he did a great job of running with it. His books have gotten a little thick, but I still did not want this one to end.… (more)
LibraryThing member Palunboy
An eeriely accurate look at what could have happened instead of what happened on 9/11. A very good and compelling read.
LibraryThing member writertomg
President Ryan deserved a much better book, Tom Clancy. Not one of the better "Ryanverse" novels, I think this is the one that got me to stop reading Clancy.
LibraryThing member Pat_F.
4 stars from when I was 36, and 2.5 stars now that I'm older.

Starting with Red Storm Rising (1986), I used to buy every new Clancy novel in hardcover the day it came out. Back then, I was all about the storytelling, and when Clancy was on his game, there wasn't anybody better. He created an entirely new genre--the technothriller--and his sprawling, multiple-perspective stories were entirely satisfying and even educational.

Clancy always was an unapologetic conservative Republican, which, OK, I can deal. But right about the time he and his first wife separated and then divorced (1995-1999), a strain of misogyny started creeping into his books. Without Remorse (1993) was outright obscene, in fact--lovingly describing the sexual torture of one of the characters. That's when I started getting leery of Clancy.

So, with that backstory, on to Executive Orders, the second book to come out after Without Remorse and the eighth book to star Jack Ryan. By now, Ryan has become President, after a major terrorist attack on Washington, and he's fighting battles on several fronts: political, personal, the media, etc. At the same time, forces are gathering to destroy the U.S. once and for all, using multiple forms of attack. It's a race to the finish to see whether Ryan can set up a functioning government and unravel the conspiracy before other disasters strike.

The story is told from multiple perspectives, as usual. The best sections involve Clark and Chavez, the biological weapon development and its effects, the military strategies, and the political maneuvering. But it's WAY too long--it could have been cut by a third without losing anything. Jack's wife, Cathy, shines when she's in her medical role, but she's been reduced to a simpering fool at all other times. In fact, all of the women in the story are reduced to their reproductive function in the end--if they're childless, they always wanted to have them, for example. Blech. I didn't really notice how Neanderthal Clancy was when I was younger, but now that I've been around the block a few times, it's everywhere...in several places, I just kept flipping pages. It's still a satisfying story, but the signal-to-noise ratio was really low in this one.