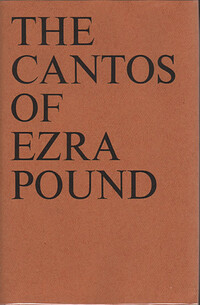 The cantos of Ezra Pound

For this edition of one of the great landmarks in twentieth-century poetry two previously uncollected cantos have been added, and some passages from other cantos, omitted from earlier printings, restored to the text. The additional cantos, numbered LXXII and LXXIII, were written by Ezra Pound in Italian, during the collapse of Italy at the end of the war. They belong in the sequence between the John Adams and the Pisan cantos.

LibraryThing member languagehat
For all its maddening qualities, the foundation stone of modern American poetry. "These are the Alps. What is there to say about them?" (Bunting)
5 more
LibraryThing member SundinRichards
How even approach this master work? From the SIDE, is the answer. Attempt a vertical reading. The Grandpa will brook no pussies. Be ready to not be ready. He WILL slay. It's absolutely worth the trouble, if you're interested in poems. If not, you're not needed.
LibraryThing member HadriantheBlind
Phew. This is something. I feel like I've run a marathon.

This is a wholly absorbing set of poetry. Approximately 120 cantos which start off reminiscing about the Renaissance, going through all eras and ages of history, citing letters, missives, pamphlets, rages. History as poetry, a grand tour.
Show More
Chinese characters, intricate, representing ideas and names and figures.

The chant, USURA, elicits rage and greed and war, and the titanic struggles against corruption and ideology which have consumed this past century and which still rage in this one.

As much I find Pound the man abhorrent and mad, but as for Pound the poet, he is a force. I will reread this.
Show Less
LibraryThing member jsburbidge
One of the inescapable works of the Twentieth Century, for all of its difficulty; it left poetry as a field permanently changed and enriched, even if Pound's own approach was so specific to himself that he has no true successors, but only a vast field of those whom he influenced.
LibraryThing member JuliaBoechat
“M'amour, m'amour
what do I love and
where are you?
That I lost my center
fighting the world.
The dreams clash
and are shattered -
and that I tried to make a paradiso
terrestre.

I have tried to write Paradiso
Do not move
Let the wind speak
that is paradise.


Uma das páginas mais perfeitas que eu li até hoje.
Show Less
LibraryThing member DanielSTJ
Easily the most complicated poem I have ever read. Enjoyable but a guide is necessary to reading if you wish to maximize the experience. Very original and raw.
Fewer