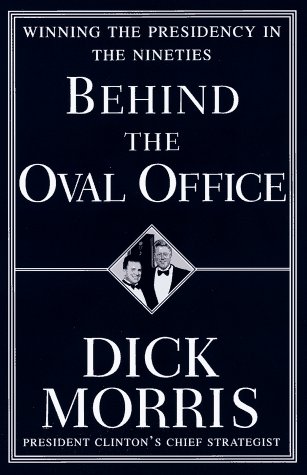 Behind the Oval Office : winning the presidency in the nineties

Dick Morris has written the ultimate inside story about the dramatic reelection of President Clinton, one that is certain to stir controversy about the way politics really works in America today. No one before has so vividly described what policy advisers, pollsters, and advertisers do behind the scenes in the Oval Office. And no one has so acutely identified the new political forces that are dominating America today. Dick Morris was, as Time magazine put it, the most influential private citizen in America. He was President Clinton's secret election strategist, invited to advise the demoralized president in the wake of the midterm debacle of 1994 that gave Newt Gingrich and Bob Dole control of Congress and, it seemed, a certain Republican victory in the 1996 presidential campaign. It did not turn out that way. Clinton made the biggest comeback in the history of modern politics, and he did it largely because of his partnership with Dick Morris, the man whose remarkable political insights helped Clinton become governor of Arkansas in 1978 and rescued him from defeat in 1982. They had a rapport that Clinton himself has called "probably unique in American history." The assignment after the 1994 Republican congressional victory began in utmost secrecy. Morris, who had to cross the road from being adviser to Republicans such as William Weld, Dan Coats, and Trent Lott, was for months known only as Charlie, an unknown source calling Clinton's private White House telephone number. None of Clinton's Cabinet or inner circle knew anything about this, and they could not understand why Clinton began speaking in a new voice. When Clinton decided he needed Morris in the White House working with others, Morris became an object of intense scrutiny, speculation, and envy. He was Washington's great mystery man. He refused on-the-record press interviews. He was controversial. But he succeeded brilliantly. He laid the foundation for Clinton's return to the White House for a second term. He decided to write a book about it all--about his view of Clinton, his own role, and his perception of a change in the mood of the voters. In August, the president asked Morris to wait until after the election to write this book and to make it "right for Bill Clinton and right for Dick Morris." And then Morris blew it. On a day to savor his triumph, on the day when a resurgent Clinton addressed the Democratic Convention, Morris was on the way out in disgrace: revealed as having had a relationship with a prostitute who claimed he talked freely of his work for the president. In Behind the Oval Office, Dick Morris makes no excuses for his personal conduct. He is candid about it--painfully so--contemplating the wreckage of his career and the damage to his marriage. But with his book he achieves something significant on three levels. Shedding light on the unseen forces that drive politics today, he reveals just how the Republicans were routed by a combination of a Democratic shift to the center and an unprecedented and secret selling strategy. We have a box-seat view of the struggles in the White House for the soul of the Democratic party. We are taken deep into the hidden relationship between President Clinton and Republican Senate leader Trent Lott. The author explains how the deals they cut formulated the laws they passed--laws that doomed Dole's bid for the presidency. And then there is William Jefferson Clinton. Morris gives us a three-dimensional portrait of the man and the politician. He draws on their twenty-year relationship to explain Clinton to us so vividly, with such new perspective, that we meet him as if for the first time. Morris lets us finally understand Bill Clinton and gives us vital clues about what he will do for the next four years. And we see Hillary Rodham Clinton at work and at home, facing up to political storms and adding her voice to the disputations about which way… (more)

LibraryThing member sarialam
Resigning after being caught with a prostitute, Morris, Clinton's pollster/strategist, reveals little about the scandal and fails to convince the reader that he was a major White House player. Morris is credited with developing Clinton's triangulation strategy, which may be viewed as either an attempted moderation of the Democratic Party or a sellout to Republican interests for votes. Morris unintentionally shows that polling and promotion are no substitutes for planning and leadership. (Library Review)… (more)
1 more
LibraryThing member wenegade
interesting insider account. Morris is revealed to be far more liberal here than he makes himself out to be in his later books.
Fewer

Spin cycle : inside the Clinton propaganda machine by Howard Kurtz
The Choice: How Bill Clinton Won by Bob Woodward
Trail Fever: Spin Doctors, Rented Strangers, Thumb Wrestlers, Toe Suckers, Grizzly Bears, and Other Creatures on the Road to the White House by Michael Lewis
Shadow : five presidents and the legacy of Watergate by Bob Woodward
Kennedy & Nixon : the rivalry that shaped postwar America by Christopher Matthews
2 more
Eyewitness to Power: The Essence of Leadership: Nixon to Clinton by David R. Gergen
My life by Bill Clinton
Fewer